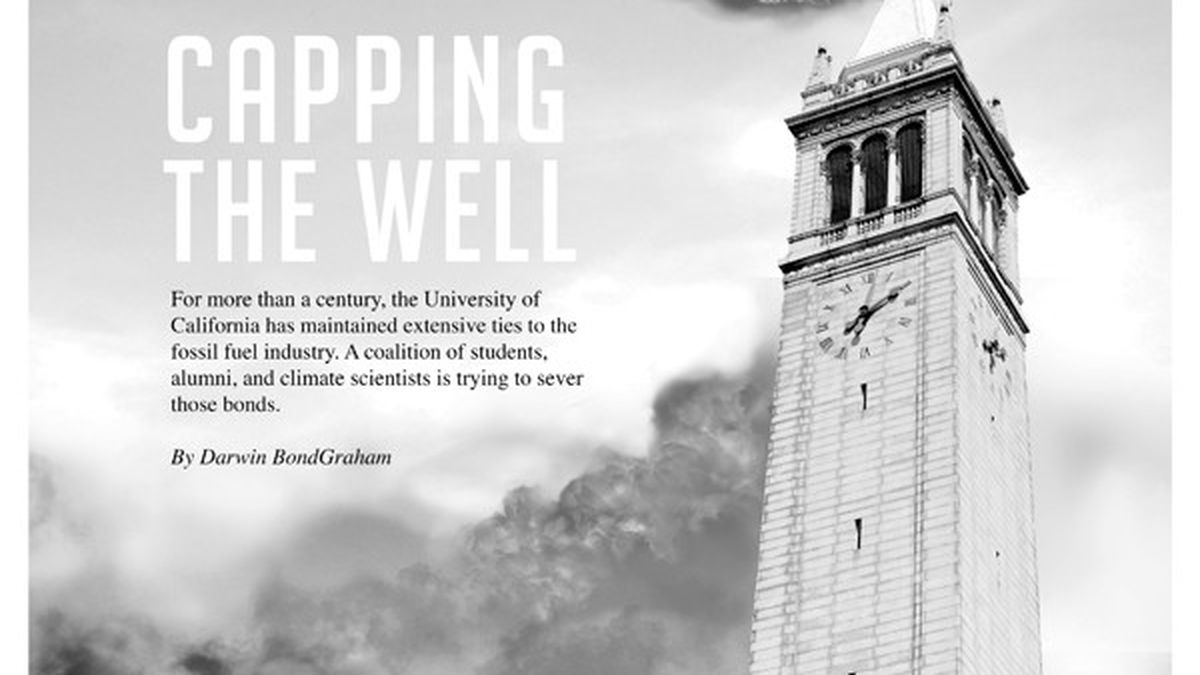 Writers sound off on Kaiser, liberal policing, and fracking's effect on the wine industry.

“The Trouble with Kaiser’s Technology,” News, 9/10

Kaiser’s move to San Leandro and Oakland was not a success. Kaiser is scheduled to open a new facility in Redwood City in December, and we have the same concerns, because Kaiser will not admit its failures with the two most recent hospital openings. Instead of fixing the problems identified by the nursing staff, Kaiser has chosen to continue its unsafe practices, placing patients and the nursing staff at risk. We have been chronically understaffed for months with no plans to increase staffing with the bigger, newer facility. Thanks for shining a light on the challenges we are facing in the fight to keep our patients safe.

Kaiser was not prepared for this move. We don’t have enough nursing staff in the NICU to safely care for patients. Permanent staff nurses should be hired and trained, so that Kaiser patients receive optimal care. Managers are assigned to the role of charge nurse, which is clearly a safety issue, as they don’t routinely do patient care. There have been adverse outcomes as a result of using this faulty model of managing the unit. Kaiser, stop using travel nurses. Commit to your members, and provide the quality care you promised when they enrolled.

Kaiser is playing Russian roulette with patients’ lives. I have been a high-risk labor and delivery nurse for almost thirteen years, with ten at Kaiser Oakland, and this is the most unsafe and anxiety-ridden moment of my nursing career. It is unethical that Kaiser chooses profits over patients. The chance that technology might fail is a major safety issue. On the Labor and Delivery floor our phones are still not working. We do not get calls from our patients in order — which is an annoyance if an RN is not alerted that the patient desires water, but is a potentially fatal issue if the patient falls in the bathroom. This must be resolved as soon as possible, yet our loudly voiced concerns fall on deaf ears. $14 billion was the operating revenue posted recently in the SF Business Times by Kaiser Oakland! We know corporations are not looking out for the people, but this is another sort of evil: to intentionally ignore severe concerns and place lives at risk.

Give Credit to Previous Administration

While it does not necessarily detract from [author Robert] Gammon’s conclusions, I would point out that the hiring of Chief [Chris] Magnus was approved by the mayor and council many months prior to the 2006 elections, and that the reason Magnus rose to the top of the candidates list was because of the clear priorities set by the previous mayor and council.

It’s About Being Smart

The real key to Richmond’s success? ‘”We are surgical,’ Chief Magnus told the CoCo Times earlier this year. ‘We concentrate on people that need to be focused on.'” Both Richmond’s (conservative) enforcement and (liberal) prevention/intervention strategies are focused on the one hundred or so most violence-prone individuals in Richmond. This is what Oakland lacks: a smart, evidence-based approach to crime and violence. Oakland and Richmond both have progressives in power. Richmond’s progressives appear to actually have some policy smarts as well.

Thank you for your great article on Richmond. I have lived here for eight years and I am so proud to be a Richmond resident. I came from Oakland to find affordable housing (I live in Atchison Village, a housing cooperative) and I still have a fondness for Oakland after living there and raising my children there. I just wish they would find a way to emulate what Richmond has done.

I’m so happy to see Rob Brezsny’s insightful and delightful horoscopes back in the Express! His column was one of the main reasons I would pick up a copy of the paper back in the days before there was an internet. Having Rob’s horoscopes once again grace these pages is a welcomed homecoming for Bay Area readers. Carry on!

Grateful for Free Will Astrology

Good for you for getting Rob Brezsny’s amazing astrology column! My local tiny paper carries it, for which I am hugely grateful every week. He is a remarkable man, with great humor and amazing perception. I am so glad your readers will have the information and humor he astutely gives every week. Thank you, Rob!

Is There a Traffic Study?

I live in the Oak Knoll area of Oakland and take my dog up to Knowland Park quite often. I am also very troubled by the zoo’s proposed expansion and thought that your article was terrific and hope that many people read it. I was wondering if a traffic study has ever been done as on the weekends, the on and off-ramps, from and to 98th Avenue, are backed up onto the freeway and there is always a line of cars waiting to get into the zoo. Has the zoo done any traffic studies? Because if they build the expansion and are successful, many more people will come. I used to live in the Glenview district, and Starbucks wanted to open on Park Boulevard. They lost their ability due to a traffic study that said that having a coffee shop where people would come and go often was not possible on such a busy street. In any case, I wonder if this has ever been studied or evaluated.

I was pleased to see your article on Knowland Park and the Oakland Zoo expansion. I was actually on a tour of Knowland given by the Oakland Zoo for the East Bay Conservation Committee of Golden Gate Audubon. Nik Dehejia was the main spokesperson, though others accompanied him. The longer the tour went on describing what oak trees the zoo would take out, the mitigation they would do, the paved roads they would have to add and the space for 125 campers, rather than answering questions on bathroom, shower, and food facilities for campers led me to question the project.

What clinched it for me was when Dehejia whipped out the blueprints for the destination restaurant, offices, gift store, and visitor center that would go on the ridge connected by gondolas whose supports would go through the rare maritime chaparral. I then knew that this project had nothing to do with teaching about the native California environment and everything to do with ego.

The Oakland Zoo has more than enough space for expansion in the fenced-off area near the freeway and near the parking lots, but clearly they want that view and they are willing to destroy rare environmental assets to get it.
I have had nothing but respect for Joel Parrot in the past because he brought the Oakland Zoo from being one of the worst in the country to one of the best mid-sized zoos. Oakland has set national standards for the treatment of elephants and the zoo offers free lectures to the community. But that good cannot compensate for a bad idea that has had a record of a poor process, whose success is based on taking public land, and that has had no financial transparency and accountability.
A lot of fault lies with the Oakland City Council, which is all too quick to support projects that end up needing financial support that ultimately cuts needed services. The council does not follow through on getting information that is demanded through the city’s own management agreements. Let’s hope that this project can finally be ended and the Oakland Zoo will continue to make needed improvements to its existing displays.

A difficult issue, this. Here’s hoping a compromise amenable to all parties can be reached. That said, I’ve known Dr. Joel Parrott since the early 1980s, before he became director of the Oakland Zoo. At that time the zoo made the cover of Parade magazine as “one of the 10 substandard zoos in the country” (and deservedly so — I was a docent there at the time). This was during the dark days of William Penn Mott’s reign. Dr. Parrott, in his tenure, has turned that completely around, making the Oakland Zoo one of the best in the country.
The Oakland Zoo is also hosting progressive and innovative condor and western pond turtle recovery programs. With all due respect, some folks need to cut Dr. Parrott some slack. He is an honest and honorable man, and one of the very few zoo directors anywhere willing to speak out against the use of elephants in traveling circuses and carnivals. Here’s hoping for a successful and civil resolution to the issues at hand, for animals and plants alike, both wild and domestic.

Thanks for this report. No surprises there about the Bureau of Land Management’s coziness with the oil and gas industry, just like logging companies and the US Forest Service. Given potential serious impacts to the California aquifer from fracking, what protections for groundwater is the state contemplating? Are any of the deep wells that are sunk for vineyards (which are themselves sucking up state water) likely to be at risk for contamination (one of the few industries that might have enough pushback to get involved)?

Our September 17 cover story, “Why Oakland Can’t Fire Bad Cops,” misstated when the City of Oakland had withheld exculpatory evidence in the case of police Officer Bryan Franks. It was when the Franks’ case was still in its disciplinary stage and not yet had reached arbitration. Also, the story misstated the month in which the city hired attorney Stephen Roberts in the arbitration case of police Officer Robert Roche. It was February 2014, not March 2014. &#8;