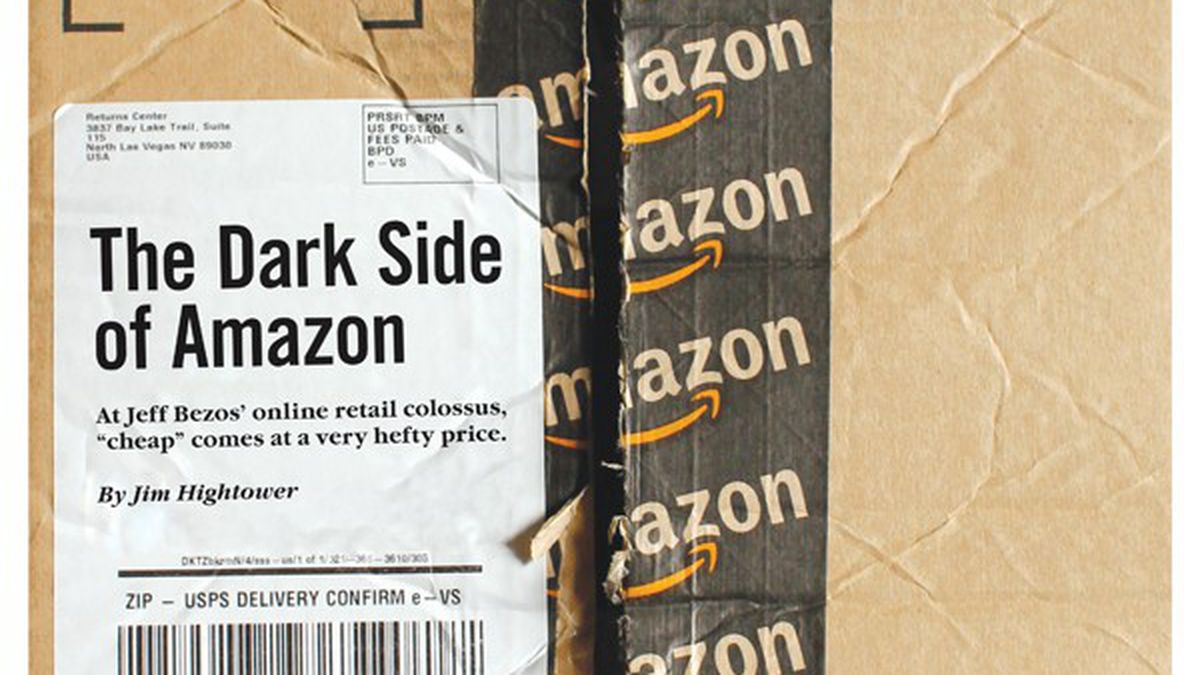 Apple Is No Better

Amazon CEO Jeff Bezos’ manipulation of the world market is not news, but reading about the increasing treatment and abuse of employees was unsettling. But this has been the American way for decades. The practice of working employees to death with fear — and without any benefits — is just getting more clever and devious. At least Amazon (unlike China’s Apple manufacturers) doesn’t shack up its employees in high risers with nets to “protect” jumping employees from killing themselves. I expect that will be next.

While I enjoy listening to Jim Hightower’s rants on NPR with my morning coffee, I was sorry to see his byline on the feature article. I don’t argue the point that the workers in Amazon’s distribution centers endure a miserable existence — I read the Mother Jones article he refers to. But he does lay it on with a trowel. I was surprised that the photo of Mr. Bezos was not enhanced with horns and a tail. I think it’s a shame that the Express chose to run this rant as its feature article, rather than running a good piece of local journalism from a local writer. I have to admit to some prejudice here — I wrote a couple of features for the Express way back in the day when it had wonderful editors and — gasp! — fact checkers! I am frequently disappointed with the Express in its current form, but I’d really hate to see it disappear.

There’s not much in this article that dedicated Amazon-haters such as myself didn’t already know, but it’s important to keep spreading the word. I’ve never purchased anything from Amazon (or, for that matter, Walmart) and never will. It’s up to all consumers — but especially middle-class ones — to stop feeding these monsters and pay a few more dollars for the good of their local communities and businesses.

“The Problem with Paid Petitioners,” News, 9/24

Tim Draper was a ridiculous figure swathed in millions of dollars and self-centered with a kooky idea. At least Californians were alert enough to reject signing his nutty petition. Some petitions are so fraudulent it makes one wonder if the process itself is broken before it begins. Our elected officials need to do a better job so that there are fewer and fewer initiatives.

Run Tramutola Out of Town

When I was first summoned in a loud voice to sign a Waste Management petition in front of the Lakeshore Trader Joe’s, I explained politely that I now have a policy of not signing anything I’m not fully informed about. The man’s response was to yell insults at me and tell me I was stupid for not wanting my taxes to not be raised, for wanting my recycling to be dumped in landfill, and for wanting my garbage bills to go up drastically. At that point, I had no horses in that race, but you’d better believe I started to research the situation after that! Larry Tramutola should be held accountable for the horrible behavior of the people he hired to lie and intimidate the public, and should not be able to show his face in our community again, instead of being hired repeatedly to run dirty campaigns.

It simply makes sense to drug test doctors. I’ve heard stats that one in five doctors will have a drug and/or alcohol problem in their lifetime. That’s an awful lot of doctors!! Even if it were one in ten, that’s still too many. The two other components of Prop 46 are even more important. Frankly the malpractice-damage cap should be abolished altogether; however, Prop 46 simply wants to raise the cap to coincide with economic inflation. Mandatory implementation of the CURES drug prescription database is simply common sense.

Chevron Is Trying to Buy the Election

We live in Point Richmond just a few blocks from the refinery. And almost every day, our mail contains Chevron-produced hit pieces against one or more of the independent progressive candidates, and slick brochures making Nate Bates look like the hero he isn’t. It’s very dismaying to watch them try to buy the election. But corporations are people too, right?

Thank you for the most accurate and informative reporting of the candidates’ platforms in the upcoming Richmond mayoral election. The thousands of slick, glossy campaign flyers provided by Chevron’s $1.6 million to their chosen few pollute the environment like Chevron and insult the residents of Richmond.

Tom Butt is the only candidate with a local business that provides the city with jobs and taxes, so he knows how to run a city. Vote Tom Butt for mayor.

As a 25-year Sierra foothill advocate for Mokelumne River protection and restoration, I’m supporting Marguerite Young in this race. I’ve known and worked with Marguerite for years. Unlike Katy Foulkes, Marguerite opposed the river-destroying proposal to expand Pardee Reservoir. And as the article noted, she supports true Wild and Scenic River protection for the Mokelumne. I urge voters who care about the source of their high-quality water to vote for Marguerite Young this fall.

It’s How the System Works

“This collaboration stings most because it repurposes something Radiohead proved to be a liberating asset of the internet — free distribution — as a service of corporate marketing.” Gosh, what a surprise: Corporations appropriating the culture for their own benefit. What’s next, profit-taking?! It’s how the system works. We create, they profit.

Our September 17 restaurant review, “Have a Ball,” listed the incorrect phone number for Liba Falafel. The correct number is 415-806-5422.

Also, our October 1 election story, “Berkeley Versus Big Soda,” mistakenly stated that Measure D supporter Pamela Gray was a member of the Berkeley Children, Youth and Recreation Commission. She is a former member. In addition, one section of the story confused the last names of Measure D supporter Sara Soka and opponent Leon Cain. It was Cain who registered to vote in Berkeley on August 4 — not Soka. &#8;

How to Win Conservative Friends and Influence Republican People

Best Concert SeriesHear the best of the best