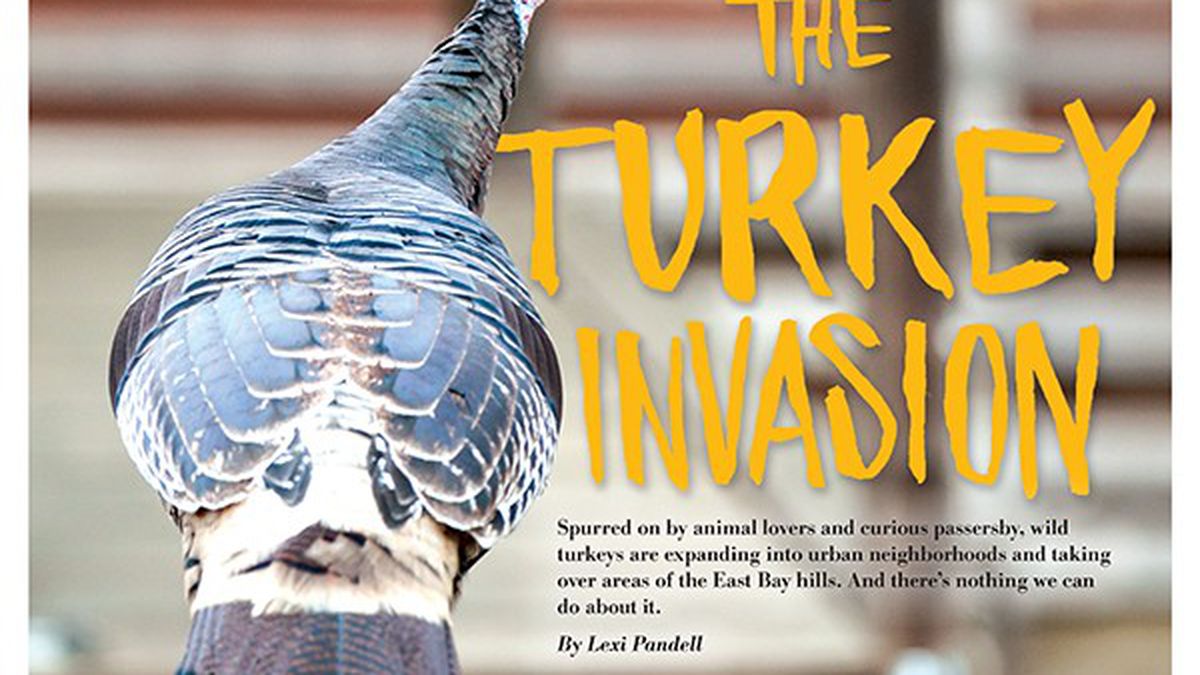 Readers sound off on wild turkeys, Brooklyn Basin, and the recent elections.

The Lexi Pandell urban turkey cover story is a gift to the Bay Area, opening a conversation to the benefits of wildlife in the urban setting. Wild urban turkeys more than announce a change in the urban setting, they amaze. Jaws drop. The day brightens. The wild turkey is a bold, beautiful bird, commanding attention and recalling the once free roaming dynamic peacocks on Berkeley’s Delaware Street. Now, through turkeys, nature speaks from neighborhood sidewalks, streets, trees, and backyards.
For a city to have wild representatives from nature that can enter the urban area and state their case peaceably and indelibly is exactly what is needed. To have a wild turkey, peacock, or a four-foot-tall great blue heron daily in the backyard, or a handsome stag crossing a city street by the Claremont Hotel brings the city instantly closer to nature. In a beat, the city has charm. Colorful wildlife in the urban setting adds to a city’s desirability. This is a great place to live, to visit, to emulate.

While skunks (although they eat rats), opossums, and raccoons carry the baggage of mixed messages, the turkey brings enthusiasm and carries the message of “What to do with these stunning birds that command attention?” The turkey generates thought and useful conversation toward city and parkland planning.
The turkeys’ numbers are large enough that it’s clear it’s time to stop feeding them.

The turkey is at home here because nature is abundant in the hills and parkland surrounding Bay Area cities. That is part of the message. Density and a receding natural footprint are another part of the message. The question is how to increase the spectrum of abundance so that the urban Bay Area becomes a garden of wildlife, brightening and uniting the spirits of a diverse population. The turkey has our attention now that its numbers are significant and commanding. The turkey is an invitation to improve our stewardship of the parklands and adjacent wetlands, creeks, and shorelines.
As minds and actions open to improving the water and the greening of the city and surrounding habitat, the beckoning egrets, herons, and pelicans at our periphery will return in greater numbers to our shorelines. These marvelous birds are indicators of healthy waterways. Healthy water, the romance of abundant wildlife, and citizens who are invested in a beautiful city with healthy water, air, and exciting wildlife, changes the spirit of the city. The turkey is inviting us to find meaningful ways to live together. If we respond as a city, so will the egrets, the herons, the pelicans, hummingbirds, bees, butterflies, dragonflies, and so many more.

Someone mentioned few natural predators for turkeys? Well, there are always humans. Coyotes are probably too smart to take on a healthy adult turkey. I’ve had as many as thirty in my yard, and in those numbers, they can be quite destructive.

What? No recipes for wild turkey?

Wild Turkeys Are a Delight

I was surprised that you passed off the “Turkey Invasion” piece as an actual journalistic endeavor, when it was so obviously an opinion piece. Allowing someone as turkey-phobic as the author to write this banal story was an oversight (whenever she sees wild turkeys, she throws rocks at them?).

The author is obviously not a person who has much love or respect for wildlife. She only presented the factoids that supported her position that wild turkeys are creepy, dangerous pests, and not once spoke with anyone who might have a different opinion.

I have a rafter of turkeys that comes through my yard in Point Richmond almost daily and I delight in their company. I am willing to put up with the dust baths they make for themselves in my garden because I feel like I am privileged to share my urban home with these impressive creatures from the wild. I don’t feed them. I just feel like they have a right to live here, too. Everyday the wild creatures are killed by our pet cats and by our cars and by our intrusion into their world. I am happy the turkeys are thriving, and that they feel comfortable in my yard. I feel it’s an honor.

It is so appropriate that “gang” is the technical term for a group of turkeys that roam lawlessly, wreaking havoc throughout the East Bay!

Are you kidding me!? Let’s block this obviously beneficial, privately funded habitat creation because there might not be a janitor crew ready to take it over in 2080? How does anyone think this position is reasonable? This is another classic case of the government mindlessly shooting itself in the foot with over-regulation: It hurts everybody — the city, the developers, the public, the wildlife — and helps nobody. Totally insane.

What About Climate Change?

Has anybody considered what the two restoration sites will look like in 66 years when factoring in sea level rise? If there is no place for a marsh to move landward in response to sea level rise, it will drown and become a mudflat. Surely when thinking on the scale of seven decades this physical reality should be considered.

The Zoo Is No Different

It’s a shame that Oakland will miss out on the marsh restoration. It sounds like it would have been a good thing for the city and good for the shoreline. I have the greatest sympathy and gratitude for activists Sandra Threlfall and Naomi Schiff, who clearly have worked hard to get a good win for the environment.

Yet the problem that they face illustrates the murky, messy aspects of what happens when public land is being developed by a private entity. In another part of the city, we have a case that provides an interesting counterpoint — the Oakland Zoo’s attempt to expand into Knowland Park. The park and the zoo belong to the public, but the zoo operator — the East Bay Zoological Society, a private nonprofit corporation that has a management agreement with the city that includes a thirty-year land tenure provision — is the designated steward of Knowland Park. The Zoological Society wants to develop 56 acres of sensitive parkland (see the Express feature story, “Zoo Gone Wild,” 9/3). Because there is a population of Alameda whipsnakes, a threatened species protected by the Endangered Species Act, the US Fish and Wildlife Service and the California Department of Fish and Wildlife (US Army Corps of Engineers is involved also) would have preferred that the project stay off sensitive habitat — eminently possible because there is a good deal of degraded land within the zoo’s footprint. But the zoo refused.

The agencies have to require some form of payback for impacts if a developer refuses to avoid the impacts, as is the case here. So the current proposal which was scheduled to face a vote by the city council on November 18, includes a so-called “conservation easement,” which is actually an additional 22 acre-set-aside of more parkland to protect the snake.

But it neither protects the snake nor serves the public interest since public access would be removed. The entire mitigation rests upon the decision to place a permanent easement on the parkland but the Zoological Society has only the thirty-year land tenure agreement (actually the city’s normal land tenure limit is twenty years, but the city council granted a special extension so that Zoological Society could get a $7 million state parks grant for part of the development).

So, bottom line: It appears that, in the Brooklyn Basin case, the US Army Corps and the water board don’t like the idea of the impermanence of leased land and the 66-year limit as a site for mitigation. But in the Knowland Park/Zoo case, the agencies have apparently ignored the fact that the permittee — the Zoological Society — has land tenure for only thirty years.

Why the inconsistency between the two cases? The answer probably lies in the fact that wetlands enjoy much greater regulatory protection than uplands, so it’s easier for developers to get the permits they need on uplands property. Of course, the real issue is that often the regulatory agencies get backed into a corner by pressure from developers behind closed doors and when the resulting agency decisions are revealed, they don’t make a lick of sense, at least not from an environmental perspective.

In these two cases, common sense appears to be entirely lacking. I wish Ms. Schiff and Ms. Trelfall good luck.

You Missed Some Spending

While I’m pleased that the Express finally reported on the outside spending in the school board race, the amounts reported are significantly less than the final amounts. On Renato Almanzor in District 6, Great Oakland Public Schools spent more than $66,000, according to their November 3 Form 497 filing. And the charter schools association, through its “Families for Quality Oakland Schools” PAC, contributed a total of an additional $65,000 to the school board campaigns.

Citizens for Oakland said that by October 18 they had spent $50,968.49 on their RCV “educational literature,” $33,653.49 for printing 70,000 mailers and $17,315 for postage. So why do they claim they only spent $34,000 for or against candidates? Also, Rebecca Kaplan is missing from the second-to-last paragraph about what candidate committees had spent.

Our November 12 Seven Days column, “Progressive Domination,” mistakenly transposed the percentage results from the East Bay MUD Ward Three race with those of the AC Transit At-Large contest. However, the correct percentage results for the East Bay MUD contest (as of 10 a.m., November 10) — Marguerite Young, 51.67 percent, Katy Foulkes, 47.73 percent — were included in our Election 2014 report, “East Bay 2014 Election Results,” in the same issue.