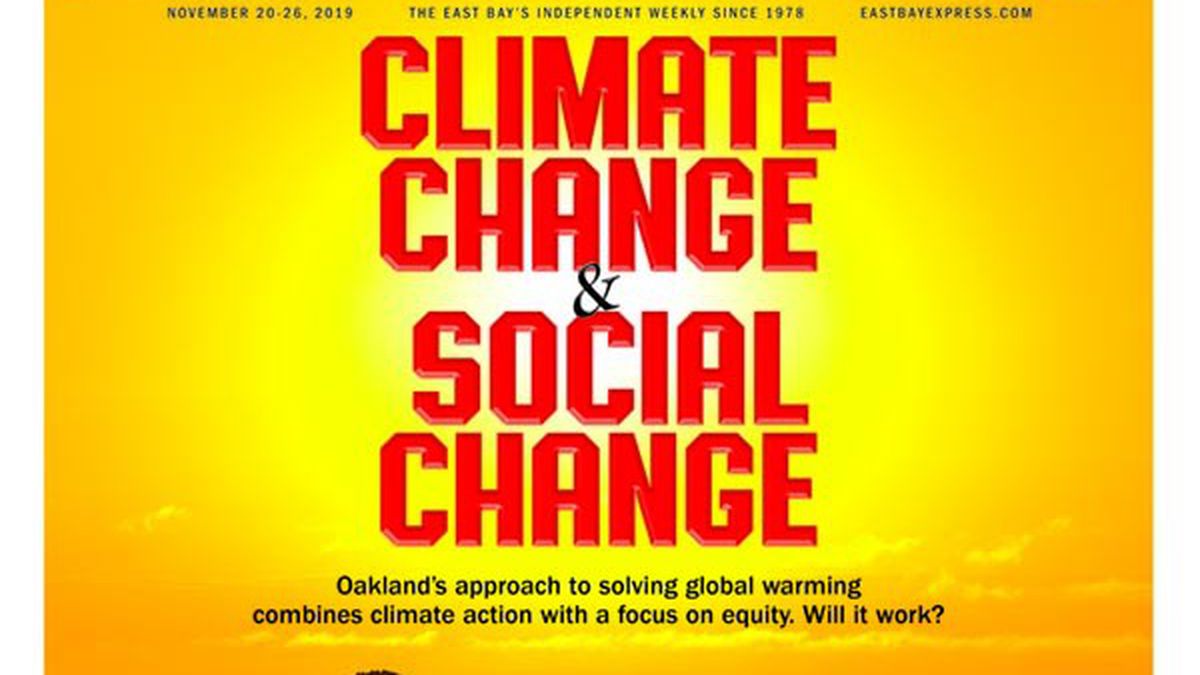 Feedback from readers on housing, climate change, and Richard Jewell.

As the saying goes, the devil is in the details. I hope everyone will go to Oakland2030.com, read the City’s draft plan, and comment on the deficiencies pointed out in this comprehensive article.

Describing Kathy Scruggs character as, “an overly ambitious, sensation-seeking Atlanta Journal-Constitution reporter that Special Agent Shaw happens to be personally interested in, picks up on something that Shaw idly drops in flirtatious conversation over cocktails,” is so terrible and inaccurate. When are men ever described as being overly ambitious and flirtatious? This was a misleading SENSATION-SEEKING liberty taken by Eastwood and company to describe Kathy Scrubbs.

Careful What You Wish For With Takeover of PG&E

No doubt, the people at PG&E have mishandled their and our affairs for far too long. Seems to have gotten increasingly worse, and they look like Keystone Kops.

Having said that, please be very skeptical that our crack government bureaucracies will have the business know how to make everything all better.

Promises to save the ratepayers billions of dollars while shoring up infrastructure does not pass any kind of sniff test. Smells like BS to me.

Money is going to need to be invested to make up for all the neglect. It will cost the rate payers. No free pony. Maybe, we can sweep the forest floors to fix it all — hah!

Better and very tough oversight is definitely needed. But, I see no improvement in management acumen or magic dollars if a coalition of bureaucracies works with a very ineffective commission to takeover. Lets start with oversight that is tough and not cozy. The failure not really being talked about is the lack of effective commission oversight. Shine the light on them as brightly as it has been on PG&E management.

If a government fix sounds easy, then it is too good to be true.

What’s Behind the Decline of the West Coast’s Herring? News, Dec. 11

Then again, something similar happened in Pacific sardine fishery in the ’60s. The claim of overfishing was made, the fishery shut down from 1967 to 1986 when it rebounded, and again there is a decline. It turns out there is a natural ebb and flow to that population.

A Soulful Page From the American Songbook, Music, Nov. 27

Tony Lindsey, whom I’ve met several times, has always been an inspiration to me and hundreds of musicians here in the Bay Area and will always be loved for his hometown feel and generosity towards all musicians and audiences.

Have loved following your reviews. Not only do I get an excellent description of tasty food, I also get introduced to the culture of the people who make the food!

24 Years of Reids is Plenty

24 years of representing our district is quite enough. We may be satisfied or dissatisfied with what Larry [Reid] has done for the district over those years. But certainly nothing in his record is so special that it suggests we ought to hand over the next 24 years to a member of his family. If anything, District 7 has seen the least improvement over those past 24 years compared to other parts of the city. where great change is well under way. Larry will now retire as a recipient of the massive pension hike that the council passed in 2004. By voting for that huge hike, Larry gave himself a 35 percent pension hike while at the same time setting up the city budget for deficit after deficit as the mandated contributions carve out an extra $20 million from daily services … which must be paid to CalPERS. (That extra $20 million is over and above the prior years’ mandated contributions). Back in 2004, the council never calculated what the overnight 35 percent boost in pensions would end up costing, as it yanks dollars out of street paving, parks, library. Now we are going to be asked to pass on the same thinking his daughter will bring to the city issues. Does only one family deserve to hold this office? Enough is enough. District 7 deserves some new and imaginative thinking.

Homelessness Is a Tragedy When Solutions Are at Hand, Guest Editorials, Nov. 20

Long-term homelessness is unavoidable in the Bay Area for several reasons. 1) The demand for housing by those being pushed out of S.F. housing relocating to Alameda County. 2) The disappearance of land in Oakland by new units. 3) California’s new rent control law that will allow rents to increase by 5 percent a year. A $1,300 unit over the next 10 years could increase 5 percent a year, will be $2,117.56, an increase of over $800 during that time period.

To slow homelessness Alameda Cty should help current homeowners to expand accessory dwelling units on their properties through affordable loans, etc. Relocation help for people that want to leave the Bay Area for other regions of the country.

Rent Control is One Cause of the Housing Crisis

I agree there is a housing crisis. But the problem is not the need for a “Marshall Plan.” That would just be more slush funds, bureaucratic spending for housing projects that will inevitably fail.

The price of housing and apartments has increased because real people have the money and are willing to pay more to live where they want to live. Generally I have seen a movement of software engineers from Sunnyvale and Palo Alto up to San Francisco and Oakland. These people have earned the right to housing because of their study and hard work, allowing them the economic means to buy the housing and pay the rent for apartments. The problem is that some people cannot afford the higher cost of houses and rents. That is not a new problem; that problem has existed since the beginning of humanity. Don’t you tell you children to work hard in school, so that they can become software engineers and earn lots of money to buy nice houses? Some people have not followed the program.

The underlying economic problem is a lack of investment in new housing to accommodate the increasing demand for housing. With all these well-off software engineers moving to San Francisco, why has there not been more housing built?

The biggest problem in San Francisco, Berkeley, and Oakland is rent control and eviction control, plus unfriendly rent board hearings and courtroom dramas. If I invest my hard-earned money and build new housing, I am taking a tremendous risk. In addition, I will need to manage the properties. But who wants to own property in San Francisco, Oakland, and Berkeley? Dealing with the rent board, eviction control, the Eviction Defense Center, unfriendly courts, rent board hearings, etc. is a headache that normal people avoid at all costs. In addition, you have politicians like Mr. Chiu to make your life miserable. So who needs it? There are other places to invest your money. So, the housing stock increases very slowly, but the demand for housing increases fast. There will be an inevitable increase in rent and housing costs that exceed inflation.

Assemblymember David Chiu, a stooge for the collapsing Kamala Harris’ presidential campaign, shamelessly blamed the housing crisis in California on His Excellency, the President of the United States, Donald J. Trump.

One wonders what kind of sick people vote for this program.

The Clock is Ticking at Point Molate, Feature, Nov. 13

Too Costly To Pencil Out

Building 2000 luxury townhomes at Point Molate will ultimately be infeasible due to the exorbitant cost of infrastructure and the likely exorbitant cost of homeowners insurance at this location with such limited access in case of wildfire, earthquake, or refinery explosion. And even if such a project were built, it would likely be a net drain on the city’s budget, with any property and sales tax revenue overshadowed by both partial infrastructure costs the developer will try to foist upon the city, as well as the ongoing high cost of providing police and fire services to residents in this remote location with limited accessibility. The Community Plan is the way to go, and bring Ohlone people whose ancestors actually lived on this land into the conversation and decision making!

Researchers from the University of California, Berkeley are conducting a study to better understand wildfire evacuation decision-making and the recent October public safety power shutoff events.

The UC Berkeley team is asking residents from East Bay communities to fill out a survey about their choices in a future wildfire evacuation. The team is also interested in learning about residents’ experiences during the recent public safety power shutoff events.

Survey-takers will be entered into a drawing for 1 of 5 $200 Amazon gift cards. The survey is available online at: bit.ly/eastbay_wildfire_survey