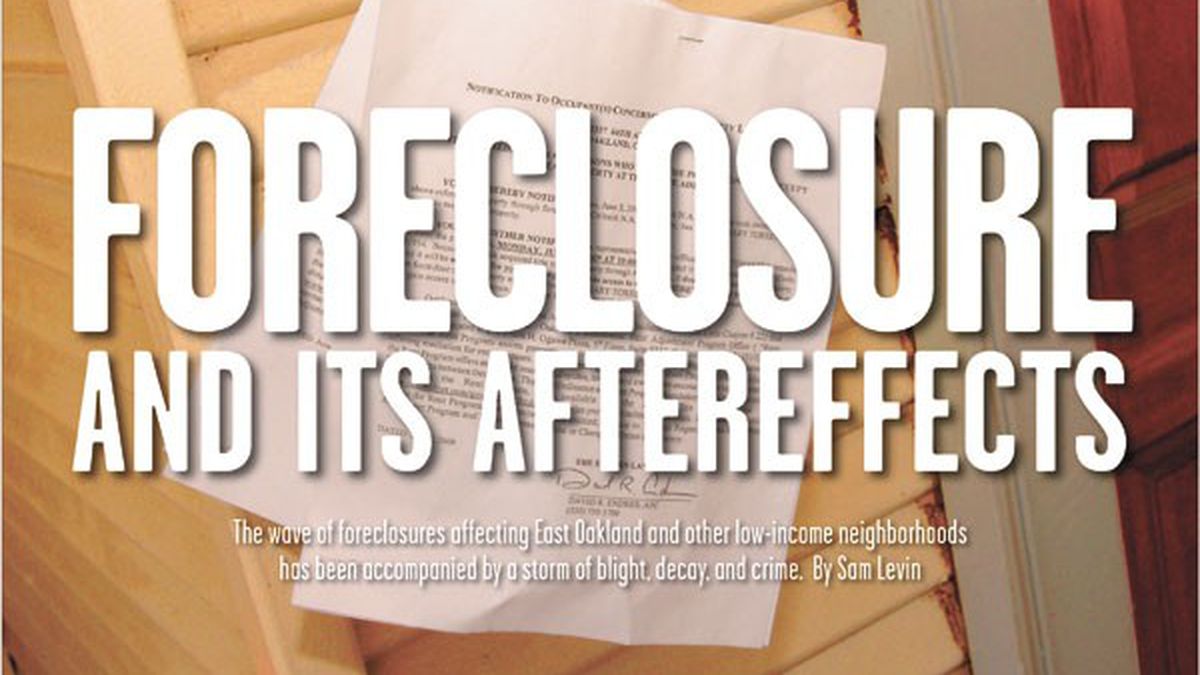 Readers sound off on the Cosco Busan, budget issues, and foreclosures in East Oakland.

“Prisoners of the Cosco Busan,” Feature, May 27

The real criminal, the Cosco Busan, was not held. If it was
held In Rem, things would have progress rapidly. Ships are accountable
and responsible for their transgressions as if they were a person in
admiralty court (federal district court sitting in admiralty).

The Chinese captain agreed to leave the dock in thick fog and had no
idea what the weather in the Bay was. The Chinese captain did not ask
that a tug be attached to stern in case of emergency or at least on the
bow. The Chinese captain thought it was ok not to wait for the stand of
the tide considering the minimum visibility. Maybe he should have had
the chief mate on the bridge monitoring the radar for the navigation
team. These are some of the precautions captains take. Instead he sat
on the bridge like a piece of furniture.

The pilot had the conn but the Chinese captain had the navigational
command.

Put the right man in the clink. The pilot, as inept as he was, was
only an advisor.The pilot’s association should be responsible for the
caliber of his ineptitude so as it contributed to the event.

Great article, although an updated version would amend the statement
that nobody is “overtly” opposing this proposal.

As of the most recent report coming to Public Safety on June 23rd,
Dan Lindheim, the city administrator, clearly opposes our
recommendation that the committee vote to accept this proposal in
principle as we seek funding for the new hires.

End the Death Penalty, Save Money

Thanks for continuing to call attention to the devastating proposed
cuts to Alameda County prosecutors and the Probation Dept. As you note,
these cuts would result in even less supervision of all released
convicts, likely increasing recidivism, as well as dangerous failures
to pursue, investigate, and prosecute criminals. I have no
argument with your suggestion to save some money by eliminating minor
drug crime prosecutions. However, I submit it would be better and
more cost-effective to eliminate death penalty trials in favor of
pursuing permanent incarceration. This would save millions of
dollars. Since 2000, Alameda County has wasted $17.8 million
seeking the death penalty for murderers who will likely die in prison
of natural causes.

Thanks for Killing Me?

As a long-time vegetarian and now vegan, I take exception to your
article on Novella Carpenter, to quote “they are killed humanely at the
hands of their loving owner and go on to sustain my life.” The author
here is trying to gloss over the fact that to kill an animal for human
consumption is murder, no matter how you look at it. I think most
people who claim to try a vegetarian/vegan diet give up too easily and
make the excuse to go back to a carnivore diet. There is a world of
good, healthy, life-sustaining food out there where no more animals
need ever suffer. It just takes a little more creativity, fortitude,
and willingness to say that in this day and age we can truly move
forward and live in total harmony with all the creatures on this
planet. We as humans do not have dominion over the rest of the animal
kingdom.

You may think your form of killing is humane, but do you look
closely into the eyes of that beautiful animal as it dies? Does it say,
“I had no choice in the matter, but thank you for killing me
anyway”?

“Foreclosure and Its Aftereffects,” Feature, 6/24

I live in deep East Oakland. There were six foreclosures on my once
owner-occupied block alone, and just as many one block over. Most of
those foreclosures have now been bought by eager investors. These were
all properties in need of major rehabilitation. Not one has been
rehabbed. Instead, these outside investors have swooped down like
vultures, paying $60,000 for homes once valued at $400,000, and renting
them out as quickly as possible to anyone willing to live in them. Our
once proud owner-occupied neighborhood has become a block of
slumlord-owned rentals. Not wonderful for the few of us owner occupants
who remain.

Can I Buy One?

I’d like to buy one of these blighted foreclosed houses for back
taxes. As someone who has been stuck renting in California for twenty
years because of super high housing prices, I am really disgusted with
Oakland allowing banks to blight neighborhoods and still hold
ownership. Why isn’t a condemnation placed on blighted houses and the
houses sold at auction to people that will fix them up? Why are
banks allowed to ruin the property value of surrounding properties and
ruin Oakland’s city budgets? Can’t the city see there are too many
people who would love a house bought for the price of back taxes,
people who will bring new life to neighborhoods. Get with the game
Oakland leaders! There is an opportunity to start collecting full taxes
on rehabbed houses with no need for federal programs. Stop giving
banks a free ride while they destroy our cities. The city could sell
blighted houses for $1 to people who promise to live in them and bring
them to code. The tax coffers of the city will swell and the
neighborhood will be a happier place.

It’s based on a true story, yes? It’s also true that many women (and
men) are stoned in Iran every year, yes? And most of this stoning is
done on very flimsy evidence, for things we in the West would not
consider a crime, correct? Put these three facts together and what you
don’t get is propaganda. The movie may be more violent than you prefer.
Hey, I didn’t like the violence in Saving Private Ryan, either
— or dozens of other modern movies. But these kinds of movies are
made all the time, and nobody does more than yawn. Except, I guess,
when the message isn’t “PC” enough. Would it have been acceptable with
less bloodshed? Or is your message, let’s let sharia be sharia.
(Feminism be damned.)

Thank you, Rin Kelly, for researching and writing your article about
SunCal and their wily operations in Alameda.  This is the closest
to an unbiased report that has been published about the duplicitous
plan the mayor endorsed in March. We need more in-depth articles
like this. Keep going, Rin.

In our July 15 Best of the East Bay issue, we misspelled the name of
the sports-card and collectible store Dave’s Dougout.

The caption in the photo of the July 15 Eco Watch (“Is Bigger Better
When It Comes to Trucking”) should have read: “Environmentalists and
organized labor want the Port of Oakland to overhaul the local trucking
industry.”