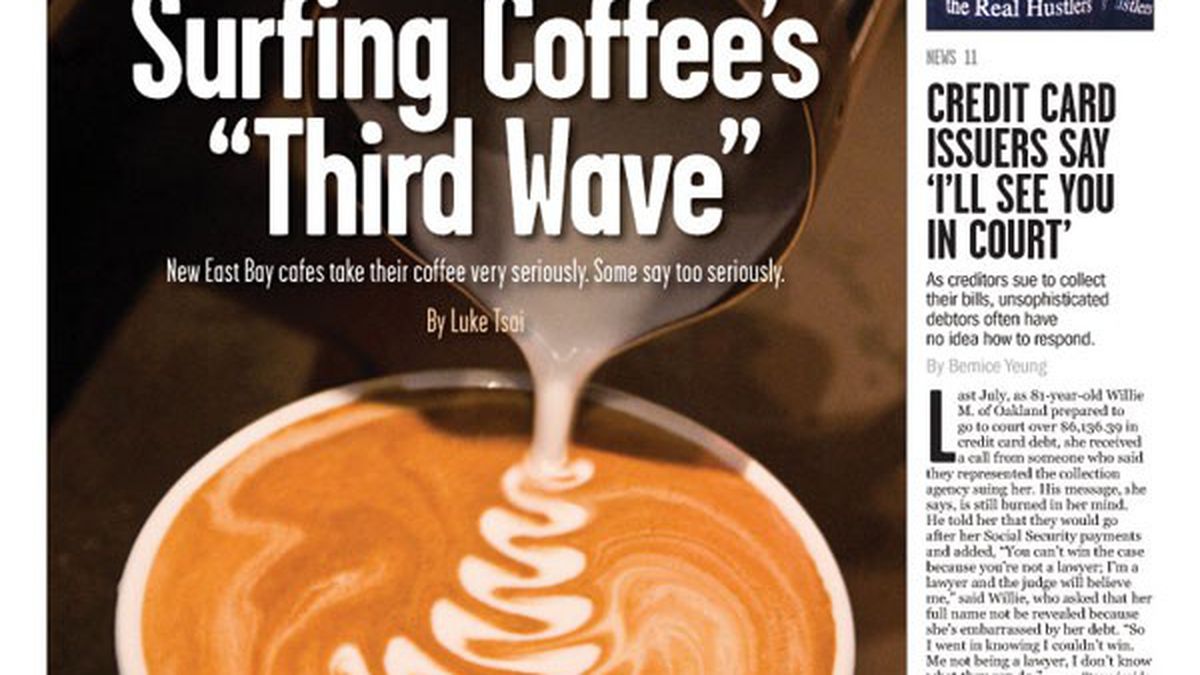 Readers sound off on the local music scene, cuts at Berkeley High and KPFA, and coffee.

While the economy has doubtless contributed to hard times at KPFA, the content of much of the station’s news and public affairs programs are also culpable. Even when the economy was relatively robust during most of the Bush administration’s years, when one might believe KPFA would gain support, it lost nearly a third of its listeners.

A significant number of progressives who now tune KPFA out and no longer make donations are members of the Bay Area’s Jewish community. Flashpoints, for example, has seen audience numbers sink like the proverbial stone, as host Dennis Bernstein, producer Nora Barrows-Friedman, and frequent guest Barbara Lubin have served up a nonstop litany of Israel-bashing that would do Becky O’Malley, the owner/editor of the increasingly little-read Berkeley Daily Planet, proud. Can there be little wonder but that the many local Jews on the left have soured on the incessant attacks on Israel by both the Daily Planet and KPFA?

When it comes to pleading by both Bernstein and Barrows-Friedman that listeners and prominent supporters cease providing financial support for the only station which would air their ideological drivel, it is clear that at this ever-more marginalized station, the famous leftist circular firing squad is operating in full drive.

I just read your article on KPFA. In all honesty, it seems far too childish of a piece. You mention that there is a 20 percent cut across the board — yet only three individuals affected! — two at Flashpoints and one at Hard Knock Radio programs! I don’t think that seems across the board, does it? Enlighten me if I’m wrong.

A second point made by Ms. Swan in her article is that if a program is not garnering the listeners, it should make way for one that would. This sounds fine if it was some television sitcom — they have made their way to “reality” shows — what a joke. Further, just look at mainstream public affairs: all the hard-hitting programs have made way for pop culture news where Tiger Woods receives far more attention (therefore more “important”) than massacres, wars, and international humanitarian laws that are being violated — many in our name. Is that what we want to see in our alternative media?

I dearly hope not! And I hope you also don’t want that to happen at KFPA! Take action to save our station — not merely let it slide down a slippery slope toward pop culture news and public affairs.

As Dire As It Sounds?

Eric Klein’s recent article left me shocked and bewildered and I wish he had included more information about the proposal, the reasoning behind it, and ways for locals to get involved. It saddens me beyond what I can express to have science education racialized. Science labs more than any other class give students the opportunity to learn critical thinking skills, to question a premise, and compare it with hard evidence before accepting it. Any way you divide us, Americans often show a dire lack of such thinking skills. The cost to any individual and to society as a whole from eliminating this from public education is truly inestimable. I hope the East Bay Express will cover this further, and that the situation is less extreme than it sounds.

There have recently been numerous articles about the possible closing of the science labs at Berkeley High School. According to the description of this ridiculous act, in the East Bay Express, “Berkeley High School is considering a controversial plan to eliminate science labs and the five science teachers who teach them to free up more resources to help struggling students.” I had to read that sentence three times before I was able to believe my eyes. Aha! Then I realized what this proposal actually means! By closing the science labs, there will be no access to higher learning for the higher achieving students; therefore, their test scores will be lowered and the gap between the higher and lower achieving students will become much smaller!

In his article, Chris Thompson bemoans that Obama’s science advisor, John Holdren, is being tarred with his past ideas for social engineering schemes to reduce overpopulation, such as introducing sterilization drugs into the water supply. Those infernal right wingers are dredging up the past.

We could discuss a current idea that Holdren brought up in April of this year; that of geo-engineering the climate via shooting pollution particles from airplanes into the atmosphere to reflect the sun to combat global warming. Have you looked at the white streaky mess in the sky lately? Are there not enough pollution particles from jets up there? Could they have already started a program like this? Don’t plants and animals need the sun? Couldn’t there be unknown consequences to the inhabitants of the earth from the chemical particulates that fall to earth? Maybe scientists of another field, say biology, botany, or entomology, might deem this idea unthinkable. I believe a lot of nonscientists would also. If this is not going to be discussed and “politicized” then will the regular people of the world have any say in something that affects us and the natural world so drastically?

If you ask me, there is far too much reverence and trust shown scientists. They are no more moral than other people, and can be corrupted by money, yet they know how to develop technologies that can alter our universe, and can sell it to the highest bidder, and do. The common person is never is consulted. Do we want GMO crops? Do we want pesticides? Do we want manmade clouds? Do we want the H.A.A.R.P.? Do we want nuclear weapons? Do we want bio weapons? Do we want land mines? We got ’em baby, thanks to “better living through science.”

The left seems to embrace science almost as a knee-jerk reaction to the right-wing allying itself with religion. And they seem to have lost all critical faculties in that regard. The Tom Sawyer and Brer Rabbit techniques work every time. If the right wing attacks something, it must be a good thing.

I just get tired of the attitude that we common folk must defer to scientists. For brilliant people, they can sure be stupid sometimes. It doesn’t take a rocket scientist to have some common sense.

“A Challenge to UC Berkeley’s Senior Faculty,” Raising the Bar, 12/2

The Streets Are Paved With Unemployed Ph.Ds

You summarize many important issues in a short piece. The problem of the unemployment of Ph.Ds has been ongoing since the great job market collapse of 1969-1970. I passed my Ph.D exams in 1969. That wasn’t the best of timing. By the time I finished my dissertation, the job market “depression” for Ph.Ds had become permanent. It still isn’t over. We used to joke that the streets of Berkeley were “paved with unemployed Ph.Ds.” So the problem is not new. It goes far beyond the current recession. At bottom, I think it will take a long, long time before the reforms you correctly wish for can be instituted.

Of course, I never got a tenure line job myself. I did hang in there anyway and finally put out that book I sent you (Solidarity Stories: An Oral History of the ILWU, University of Washington Press, 2009). It really represents the culmination of a life’s work. In some ways, I got lucky. I got to work on the International Longshore and Warehouse Union oral history project, do articles for the union’s newspaper, and teach night classes here and there. But I saw a number of my friends and colleagues drop by the wayside.

At any rate, thanks for your article. It sure struck a chord.

As Good as the Hype

Enjoyed Luke Tsai’s article on coffee’s third wave hitting the East Bay. I have been making my own espresso drinks with a succession of home machines for almost thirty years because I discovered that with a bit of care and knowledge I could make better coffee with a simple home machine than was at the time available at any cafe in the Bay Area.

I moved to Berkeley 25 years ago and would throw my hands in the air when friends asked me where they could get good espresso drinks in the East Bay.  I walked into Local 123 the second day they were open, and it was obvious that they were doing everything right. I was unable to drink coffee at the time because of stomach issues, but started the Chowhound thread on the cafe that day, describing the things they were doing that told me this was the East Bay cafe I have been waiting for.

I am now able to drink decaf, have sampled friends’ real stuff at 123, and have found it every bit as good as I expected it to be. Haven’t made it to SubRosa, Remedy, or Modern Coffee, which I hear is also good, but I have visited Blue Bottle’s new Oakland location, where I had the best decaf macchiato I have ever tasted.

To those who say coffee is just coffee and these cafes are nothing but pretense I offer this challenge: Order any coffee drink you want at the Caffe Trieste’s San Pablo location, then move yourself a few blocks north and order the same drink at 123. You don’t have to be a connoisseur to tell the difference — it will hit you in the face. It’s like going from the McDonald’s at Shattuck and University then moving yourself a few blocks north to Chez Panisse.

Thanks for including Two Tons of Steel in your Best Music of 2009 article from the East Bay Express Holiday Guide! It was a great surprise to all of us here at Two Tons Central. We are tirelessly promoting our music and hope one day to perform in your great state. Until then you can find us here: TwoTons.com

In our December 23 Theater story on the top ten plays of the year, we misspelled the name of Jack Goes Boating actor Gabriel Marin.