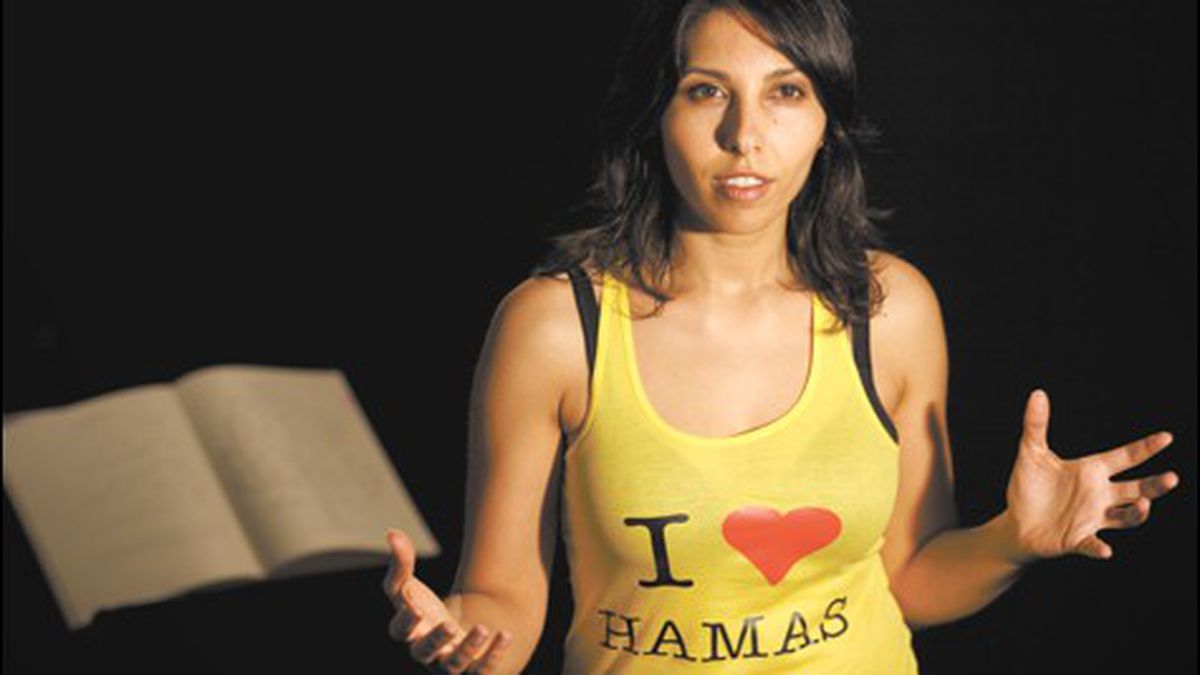 Jennifer Jajeh explores the politics of hyphenated identity in I Heart Hamas.

It took a long time for Jennifer Jajeh to settle on the title I Heart Hamas for her one-woman show. She’d already cycled through a series of banal inscriptions, mostly having to do with border crossings and hyphenated identities, often peppered with humor but never quite capturing the spirit of her play in its totality. “Any identity search can be a ‘border crossing,'” Jajeh said. “I was looking for something that specifically elaborated my experience as being from this place that has such a charge around it.” She added that Palestine doesn’t have the same kind of traveler-brochure cache as other foreign countries. “You don’t go to a party, say you’re Palestinian, and hear people say, ‘Oh that’s great, I’ve been to Palestine! I love the food!'”

But once Jajeh came up with the current title (full version: I Heart Hamas: And Other Things I’m Afraid to Tell You), she embraced it. She started manufacturing “I Heart Hamas” paraphernalia. She began posing for promo photographs in a girly “I [Heart] Hamas” tank top, which closely resembles its “I [Heart] Oakland” counterpart. Jajeh shot a promo trailer that required her to sport a series of other T-shirts with similarly tongue-in-cheek slogans: “Kiss Me, I’m Palestinian”; “Arab”; and, courtesy of her doting, Catholic mother, “Sexy, Single, and Available.”

Jajeh said the pressures of having a dual identity were a major impetus for the show. She began writing it in 2008, inspired partly by the single-girl blues and by hectoring family members who wanted to find her a nice Palestinian husband. By that time, Jajeh had already been a film and theater actress for several years. Slender and dark-haired, she landed a variety of roles — but none of them were very satisfying. Jajeh is not a provocateur per se, but she wanted a storyline that seemed more relevant to her own life, and to the world at large. “I didn’t feel like issues that were vital to my life were being examined in the indie films I was doing,” she said. “I feel like I grew up part of these two worlds, but I could never really settle into either of them.”

Indeed, the idea of navigating a parallel universe is a huge theme of Jajeh’s life. Growing up in San Francisco, she shuttled between her American friends and the huge immigrant community that surrounded her in the Bay Area and along the Peninsula. “I didn’t want my friends to find out about it, because it was really dorky,” Jajeh said. “Nobody understands the food. I was like, ‘Don’t speak Arabic to me, mom.'” Jajeh says her identity followed her everywhere: To Catholic school, on dates, to parties and social events (where strangers frequently want her to opine about Middle East politics). She spent a year and a half in Ramallah during and after the second intifada, in an effort to recover her roots. But the same issues came up, even there. In one particularly triumphal scene from I Heart Hamas, Jajeh spits on an Israeli soldier and hears a crowd erupt into cheers. Then she realizes they’ve mistaken her for a Spanish tourist. I Heart Hamas runs Thursday and Friday, May 27-28, at La Peña Cultural Center (3105 Shattuck Ave., Berkeley). 8 p.m., $15-$20. LaPena.org or IHeartHamas.com