Red sauce, by way of Sicily. 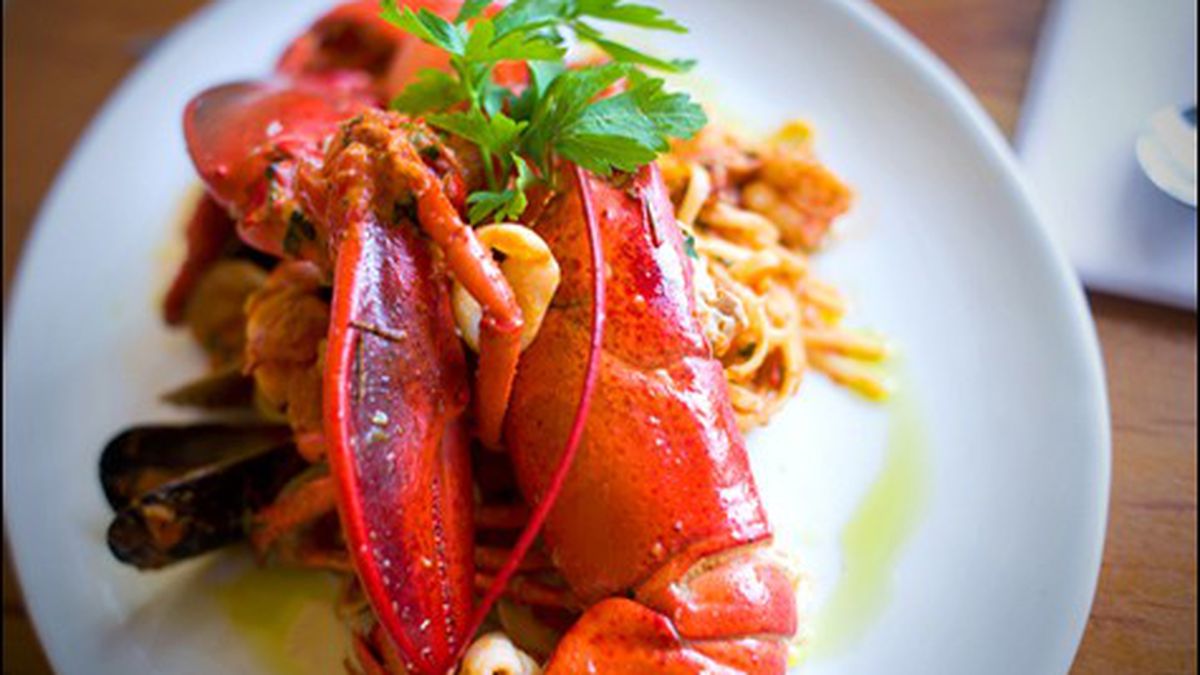 There’s no shortage of good Italian restaurants in the Bay Area — of white-tablecloth showstoppers and ten-dollar-pasta shacks; of places specializing in salumi or pizza or animal innards; of devotees to hyper-local cuisine or purveyors of obscure regional dishes. It’s an embarrassment of riches.

But sometimes the mood strikes for something that gets a lot less hype in these parts: the kind of old-school Italian eateries that are common on the East Coast. We called them “red sauce joints” because of their garlic- and marinara-sauce-heavy menus that were perhaps more Italian-American than strictly Italian — think spaghetti and meatballs and veal parmigiana. Most of these places had been around forever; were owned by first- or second-generation Italian immigrant families (with someone’s Italian grandmother running the kitchen, or so it seemed); and served hearty, unpretentious food.

Berkeley’s Trattoria La Siciliana isn’t exactly a red sauce joint — you won’t find parmigiana anything on the menu. But it shares a kinship with those places: It has the same loud, convivial atmosphere; the same imperviousness to culinary trends. What’s more, the restaurant has retained its popularity in the sixteen years since it opened, despite the fact that the local food cognoscenti rarely mentions it nowadays — Zagat seal of approval and lines out the door notwithstanding. What’s the secret to its success?

The trattoria’s founders are two genuine Sicilian immigrants, Rosa and Guiseppe D’Alo, both of who still help cook during the six months of the year they aren’t in Italy; their sons, Angelo and Gerry, are the primary chefs. The food they serve — out of one of the tiniest restaurant kitchens you’ll ever see — is old-fashioned and distinctly home-style. But make no mistake: The food is what keeps people coming back.

You get an idea of what to expect right away, when the server presents you with a basket of soft bread and a bowl of olive oil that’s loaded with rosemary, parsley, and several cloves’ worth of chopped garlic. The D’Alos call the concoction olio della mamma (it’s Rosa’s recipe), and it’s one of the garlickiest things you’ll ever taste — delightful, but only if you’re a garlic fiend like me.

Indeed, with many of the dishes, the aim seems to be to bowl you over — to sock you in the face with flavor. There was nothing subtle, for instance, about an heirloom tomato salad (from the seasonal specials menu, which changes every couple of weeks) that hit my palate with a triumvirate of briny intensity: olives, capers, and whole anchovy fillets. The protestations of salt-phobes notwithstanding, the combination worked — the juicy, peak-of-the-season tomatoes were sweet enough to stand up to the treatment. Risotto alla marinara featured big chunks of garlic (slowly simmered to bring out its sweetness), a zesty tomato sauce, and an array of fresh shellfish. Slow-cooked pork ragu was spicy, savory, and meaty — big, bold flavors once again.

Sicilian cuisine is characterized by the use of fish and fresh vegetables — less meat and dairy compared to the northern Italian provinces. So while you can order typical Italian dishes like carbonaras and pestos, the safest bets are the seafood dishes and the items marked as Sicilian specialties.

Among these, one of the most popular is the bucatini chi finucchiede: long hollow tubes of pasta topped with a dark, herbaceous mass of baby fennel, saffron, currants, pine nuts, Sicilian anchovies, and fresh sardines. The saffron and currants in the sauce point to Sicily’s Moorish influence — together with the sardines and preserved anchovies, they gave the dish an appealing smokiness and pungency that, strangely enough, brought to mind Chinese preserved mustard greens.

The best dish over the course of two visits was also the most expensive, but a worthy splurge: Tutto mare con aragosta alla diavola ($28), linguine with fresh tomato sauce, clams, mussels, shrimp, calamari, and half a sautéed Maine lobster. The sauce was the standout — rich and insanely addictive, with lavish chunks of garlic and an infusion of the ocean’s essence: all the shellfish juices, plus the lobster’s roe and brains, and a splash of lobster stock for good measure.

Much of the food was rustic in the way that home-style cooking often is, and I could pick at little flaws in each dish: shrimp were sometimes overcooked, the ragu was a bit too acidic, and both the bucatini and the risotto were a shade or two past al dente.

If we’re going to nitpick, I should note that dining at Trattoria La Siciliana means abiding certain inconveniences: the fact that the restaurant only accepts cash and that wait times can seem interminable. (Reservations are accepted for parties of three or more, but a lot of diners don’t seem to know that.) On busy nights, the kitchen can get slammed, and the service — though friendly — can slow down and veer toward the chaotic.

I’ve also been told the servers sometimes push “family-style” service (i.e., bigger portions meant for sharing) on larger parties, though D’Alo assured me it’s strictly optional. Just know that your triple order of risotto will, in fact, cost triple the price — you don’t save money by upsizing, and if, like me, you enjoy eating family-style even when you order “regular style,” you might prefer having three different dishes to try.

However, none of these quirks prevented me from thoroughly enjoying myself. Quite the contrary, I was charmed by trattoria’s old-school feel — by the decor (pottery and black-and-white photos) that probably hasn’t changed in sixteen years, by the tables crowded too close together for comfort.

In the upstairs balcony section, in particular, it was easy to imagine I was sitting in the bustling dining room of a particularly large and jovial Italian-American family — everyone talking too loudly, the smell of garlic wafting in the air and on my breath.