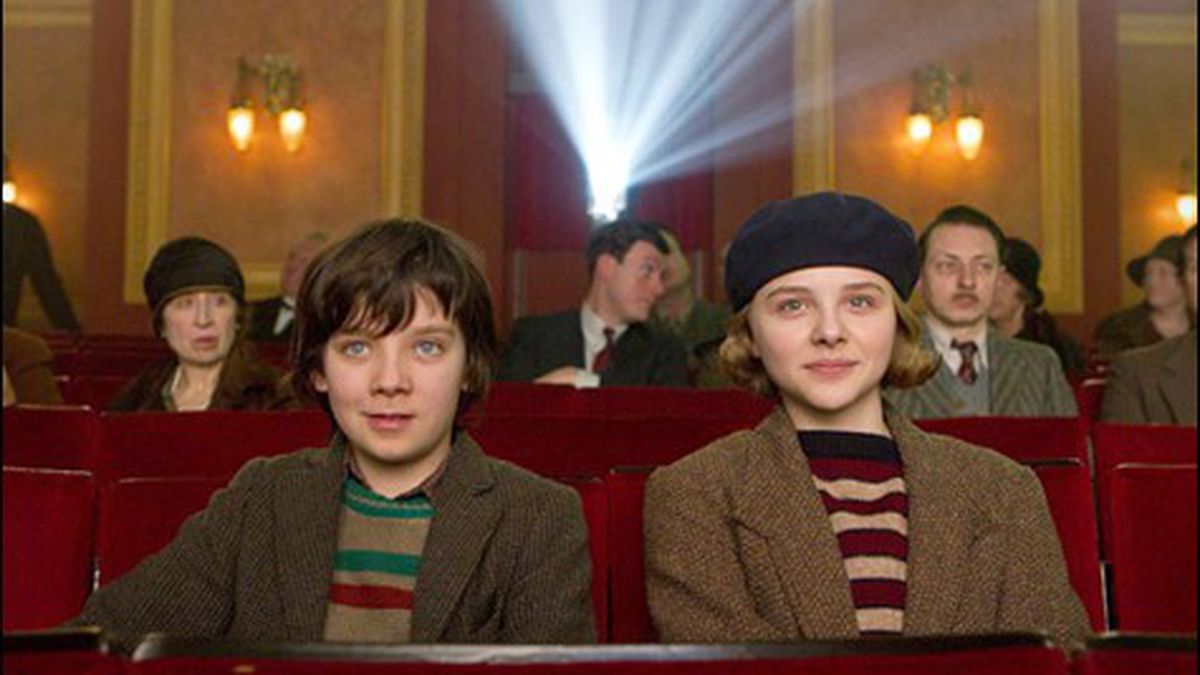 Scorsese and Méliès, masters of the fantastic.

One of the first things a student of international film learns is the difference between Méliès and Lumière. The Lumière brothers, Auguste and Louis, are generally credited with inventing the modern concept of motion pictures, in about 1895. They used their cinématographe mostly as a documentary tool, to record scenes of everyday life. Fellow Frenchman and film pioneer Georges Méliès, on the other hand, envisioned the camera as a narrative device, and developed the idea of special effects and other technical tricks in order to tell whimsical, fantastic tales.

The key Lumière image is of a train simply pulling into a station in front of the camera — audiences screamed and tried to get out of the way, at least the first time they saw it. For Méliès, it’s the shot from Le voyage dans la lune of the pie-faced Man in the Moon wincing, with a rocket ship imbedded in his cheek — the audience howled with delight, and people are still laughing.

Méliès and his spirit of playful invention are at the center of Martin Scorsese’s Hugo, the charming if overly gilded story of an unwanted teenage boy rescued by art and friendship. It’s being promoted as Scorsese’s very first children’s film — and also as the filmmaker’s first narrative feature in twelve years without Leonardo DiCaprio in it. But anyone can see that Hugo is only incidentally concerned with the actual lives of adolescents. Its real turf is the domain of the creator and his/her imagination, the land of the young at heart.

Fourteen-year-old English actor Asa Butterfield (the Nazi’s son in The Boy in the Striped Pajamas) plays the eponymous Parisian gamin with an orphaned expression on his face. He looks even more waif-like beside busy fourteen-year-old actress Chloë Grace Moretz, who has grown into young womanhood since the days (last year) of Kick-Ass and Let Me In.

Ever since the death of his father (Jude Law in flashback cameo), young Hugo has lived and worked inside the walls of an unnamed Paris train station, essentially forced into the job of maintaining the station’s numerous wall clocks by his cruel Uncle Claude (Ray Winstone). Now the drunken Claude has gone missing, and poor Hugo clings to his shadowy occupation somehow unbeknownst to everyone at the station, particularly the officious, foolish Inspector (Sacha Baron Cohen in a wonderful comical-menacing performance), who’s inclined to put truants in a cage.

Hugo loves tending the clockworks and caring for a mysterious metallic figure, an automaton, which he believes his late father left him. One day, as Hugo tries to shoplift some candy from the toyshop in the station, the shopkeeper, a grim old man named Georges (Ben Kingsley), confiscates the boy’s beloved notebook of mechanical diagrams, another paternal keepsake. In order to retrieve it, Hugo befriends the old man’s goddaughter, the bright and inquisitive Isabelle (Moretz), and together they uncover some secrets — and that’s as far as the synopsis should go without spoiling the plot.

Kingsley is properly grumpy/avuncular as fellow tinkerer Papa Georges, a nice match for his devoted wife Jeanne (Helen McCrory). Cohen’s uniformed Inspector, a war veteran whose mechanical right leg continues the gears-and-cogs motif, brings some welcome slapstick to the project. That’s Emily Mortimer hidden away as the Inspector’s inamorata, Lisette the flower vendor. Moretz effortlessly outshines her male lead, so it’s probably a defense mechanism to use her sparingly as Isabelle the family detective. At any rate, Hugo is not an actors’ picture as much as it is a precious, lovingly tended tribute to the early days of film and the gentle souls like Hugo and Papa Georges who keep the flame.

Scorsese is one our age’s most renowned keepers of the cinematic flame. He salts the slender story with too many classic-film references to list (Harold Lloyd’s Safety Last, Jean Renoir’s La bête humaine, etc.) and provides 3D skeptics with one of the finest recent uses of that abused gimmick — the Inspector’s angry face protruding alarmingly from the screen, interrogating Hugo. Beside the gorgeous flashback vignettes of Méliès and his troupe filming their magic lantern shows — enough justification for any one movie — film preservation is the other thing this film is about. In that respect, Hugo is the most beautiful public service announcement of the season.

Stories of the Great Migration to Oakland