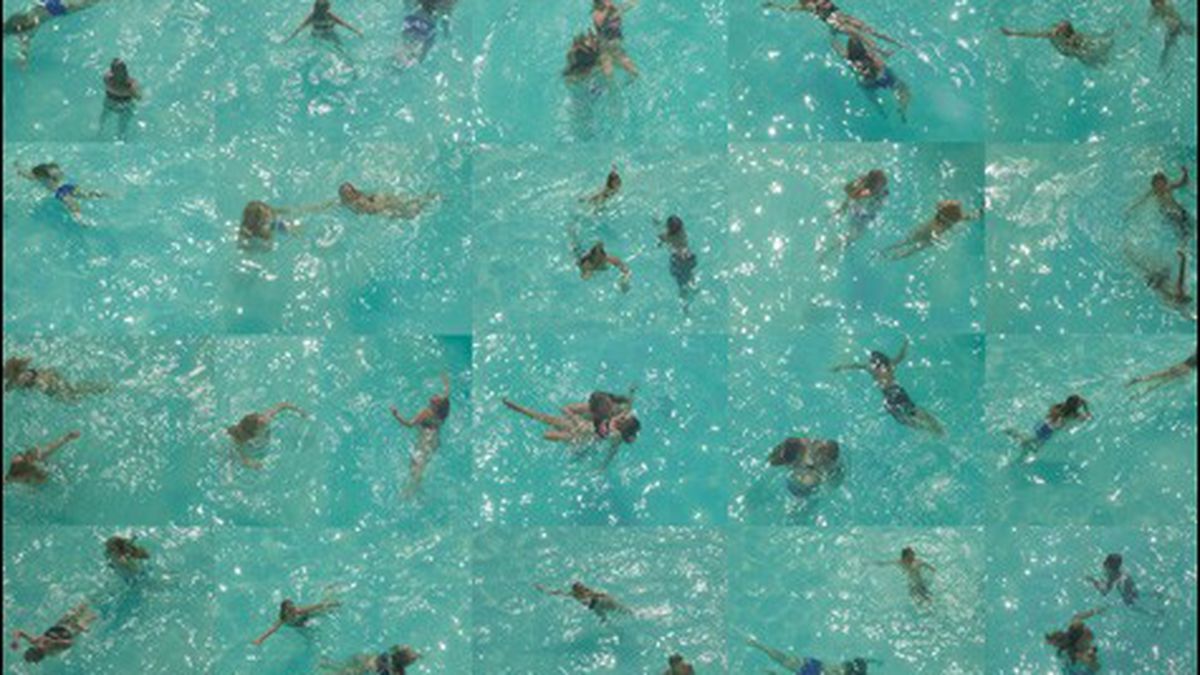 A group show addresses the theme of how togetherness and isolation play out in physical versus digital environments.

In a world where people like to speak of “connecting,” many artists — or, in the present case, curators — have taken on the mantle of reminding us how digitally mediated relationships fail to substitute for the old-fashioned kind.

Almost Together, a juried group show now on display at the David Brower Center, sets out to include works exploring the phenomenon of gathering or communion in real and virtual spaces. Many of the twenty included artists address the theme explicitly. Others present more ambiguous statements, happily stretching this visual essay into something of a question mark that stands to linger in the viewer’s mind.

Starting with the most literal adherence to the theme, we have works like Brian Donahue’s “Student Section Memorial Coliseum,” an aerial photograph of students packed into UC Berkeley’s football stadium. Shot in black-and-white, it’s like a lo-fi Gursky: Rather than depicting so many individual faces, the crowd congeals into a more or less undifferentiated mass. Lisa Levine, too, catches her subjects from above. Her “Adoration of the waters” is a grid of twenty bird’s-eye photographs of swimmers in a pool. The deceptively simple work hovers between several visual interpretations: One can keep each cell separate and read the work as a cinematic montage; or one can fuse the shots, allowing the glimmering blue backgrounds to merge into a single plane, which becomes the performance ground for what comes to look like a full-on synchronized swim team.

Several video works operate tangent to the theme. Linda Trunzo’s “Character Factory” pays glum homage to the recently closed Central Y of San Francisco’s Tenderloin district, rehashing the longstanding institution’s role as a community meeting place through interviews with its now-disbanded former members. Paul Taylor, meanwhile, takes a different tone with the documentation of his “Digital Trust Hike,” a somewhat farcical performance in which he traversed San Francisco wearing headgear that blinded him from all but his iPhone screen. Google Maps guided the artist through this precarious journey, though not alone. A network of friends positioned at street intersections helped to safely shepherd Taylor’s passage and, one must assume, man the cameras that document the piece. Thus, what we see imbricates the “real” and the digital more complexly than the piece might at first let on.

Best in show goes to the strangely charged, visually arresting works by Jackson Patterson and Donna Anderson Kam. The former superimposes images from family photo albums, in this case materializing a scene of rugby players upon a cloudy, desolate desert landscape to surreal effect. Kam also has a unique method, which involves having actors assume a tableau based loosely on a newspaper story — usually one with a whiff of tragedy, often related to environmental sustainability — and then depicting the result in garish but economical pastel before a searing white void. The present work depicts three joyless-looking teens in an inner tube, floating amid a sea of discarded tires. Though the digital enters into neither the work’s process nor its explicit representational content, the fate of isolation registers unmistakably, terrifyingly, in the girls’ expressions.