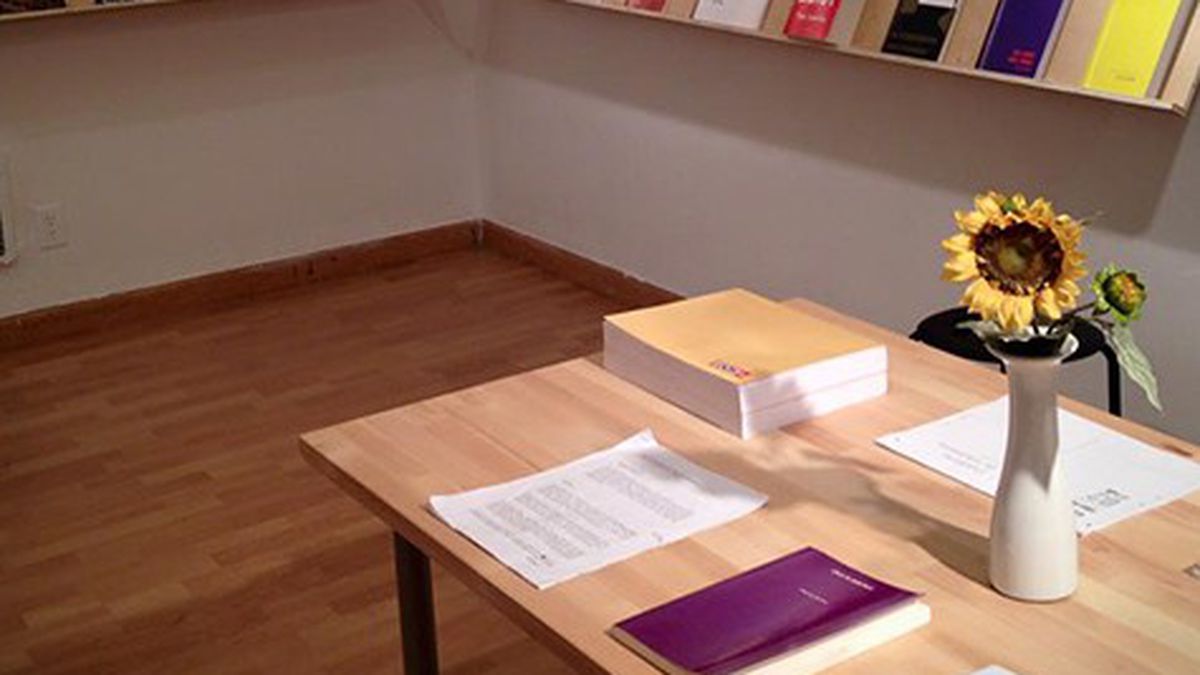 In October 2012, Oakland artist and writer Tom Comitta secured the domain name NaNoWriNiMo.org. That’s just one syllable away from NaNoWriMo.org, the website for National Novel Writing Month — home of the annual challenge in which writers around the country attempt to write a whole novel during the month of November. But Comitta’s insertion of an extra syllable suggested that one month was too long. His website looked exactly the same as NaNoWriMo’s, except every logo said “National Novel Writing Night Month.” His challenge: Write a full novel in one evening and publish it online immediately, then repeat throughout the month of November.

For Comitta, NaNoWriNiMo was a catalyst in an ongoing process of developing methods of speedwriting. He has written forty books in the last four years. Now, they are on view in First Thought Worst Thought, his new solo show at Royal NoneSuch Gallery (4231 Telegraph Ave., Oakland).

Rather than being a rapid narrative genius, Comitta preaches an expanded approach to literature. His works are often abstract, conceptual pieces, sometimes written in English and other times written in currency symbols, punctuation, or chunks of appropriated text. They mostly contain narratives, but usually the kind constituted by a vague ebb and flow or a feeling of crescendo then subsequent collapse. In many of his books, Comitta employs the letter as an aesthetic symbol. He attempts to follow through on every idea that he has.

When you walk into First Thought Worst Thought, the gallery looks as though it’s been transformed into a dainty bookstore. There’s a copy of George Orwell’s 1984 on the shelf, except it’s actually a book by Comitta called 1948 by George Orwell that is the text of a legal document with every one, nine, four, and eight massively blown-up. There’s also The Idiot, which is the text from Fyodor Dostoyevsky’s famous novel of the same name, except printed entirely in the font Comic Sans. Joining them is Z by Andy Warhol, which Comitta aptly describes as “a collection of Zs with a big name attached to it.”

But not all of Comitta’s books could be written in a night. The Anniversary Show is a challenging but enchanting book made up of text found in signage and scraps of paper inside the SFMOMA over the course of ten months. I Can See You But I Know You’re There is 37 tracings of photographs that show up when you Google the phrase “I Can See You But I know You’re There,” made entirely out of computer punctuation. For On the Road Not Taken, Comitta started with a story by John Muir and deleted every reference to the “unnatural” and “human” for as long as he could take it, drawing attention to Muir’s distinction between nature and culture by actually enacting it.

One of Comitta’s books is a manual for how to use his “soUNDtext” computer program, which is also included in the show at Royal NoneSuch. The software translates text into sound, allowing the user to input any text and decide what sound packet to filter it through, or even make a sound packet of their own. The packets that Comitta has available range from “Frogs and Cats” to slimy sounds he made with his mouth. While much of Comitta’s work challenges the practice of reading by requiring the reader to comprehend an aesthetic composition, or urging the reader to rethink literary composition, “soUNDtext” makes a more direct intervention into the reading process. By reassigning sonic values to each character rather than reading them conventionally, letters become notes for the composition of improvisational noise music when phrases are written — or “pasted” — into the input box. The output is rarely melodic, but, in the show as a whole, melody is clearly not the objective — anything avowed to a prescribed notion of worth and beauty was immediately asked to leave.

At the entrance to the show, a video montage called “How to Write Good Poetry” cements that point pretty well. It’s found footage from YouTube videos and advertisements that use poetry clichés. The awkward video blogs and beer ads are forced and exhausted, punctuating the novelty of Comitta’s work. The artist doesn’t openly theorize about the perceived limitations of literature, but matter-of-factly presents viewers with works that defy their existence. Only one book, titled after the name of the show (or vice-versa, perhaps), playfully offers insight into the intention behind each piece. And through that narrow window of explanation, First Thought Worst Thought strikes the rare chord of being cleverly comedic, visually intriguing, and conceptually challenging all at once.