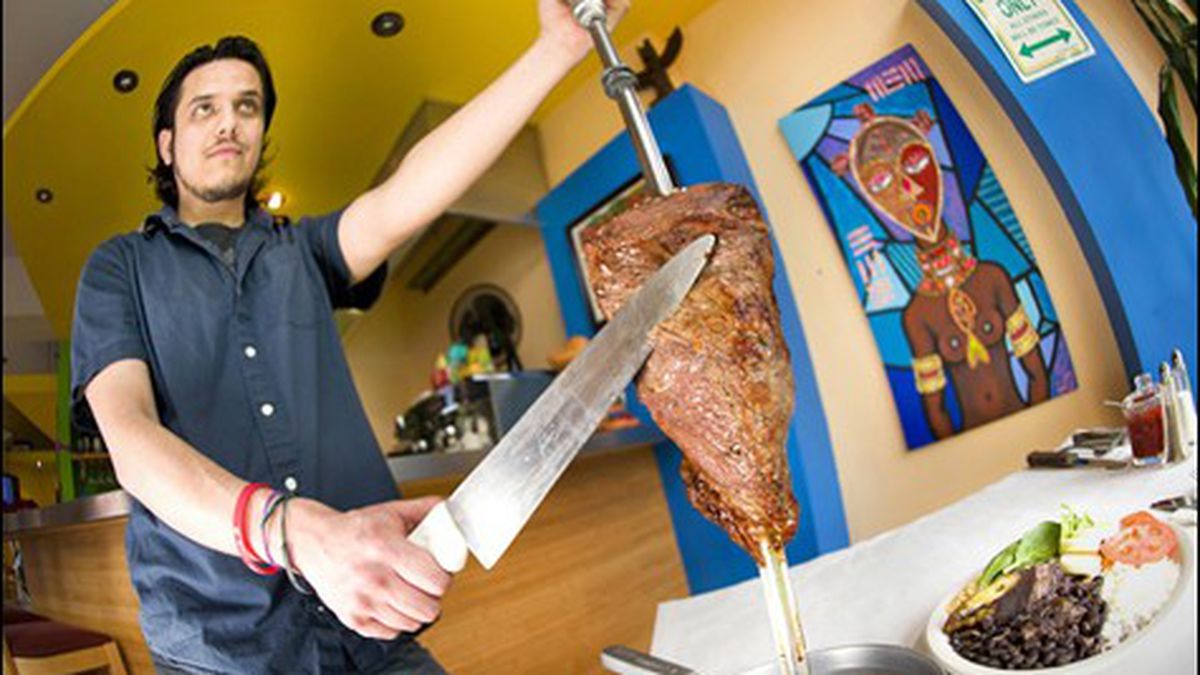 How to Survive a Brazilian Meat Party

Drink plenty of water and pace yourself at Pikanha's.

A short list of topics to avoid over a meal at Pikanha’s steakhouse: Paula Deen, heart disease, factory farming, the obesity epidemic. More than the cognitive dissonance these issues could foster, I’d hate to see you lose any appetite — you’re going to need it.

Pikanha’s is the East Bay’s only Brazilian churrascaria, served up in the breakneck rodízio (continuous service) style. For one fixed price, a never-ending grilled meat barrage is carved onto your plate by a squadron of crisp-shirted waiters. This type of restaurant hit its stride several years back, with two Texas-based chains — Texas de Brazil and Fogo de Chão — spreading at a whiplash pace through the southern and eastern parts of the United States.

Pikanha’s may not have name recognition, but it is way homier than its franchised cousins. Walls blaze with the bright primary colors of a nursery school or Colombian party bus, cluttered with a jumble of country folk art, African paintings, and clocks … so many clocks. Located in Point Richmond’s precious center, unobstructed windows allow passerby to ogle the gluttonous cheer.

At $22 per person ($16 for lunch), Pikanha’s dinner is less than half the price of the chains. Your dollar goes far here. Besides a hot and cold self-serve buffet, you get unlimited picanha and alcatra beef (both top sirloin rump cuts); tri-tip steak with garlic; tri-tip with parmesan; beef kebabs with vegetables; chicken wings; chicken breast wrapped in bacon; sirloin wrapped in bacon; chicken hearts (medium or well-done); pork loin; and leg of lamb.

The chicken wings and pork loin get a little beer and pepper marinade, but most of the meat isn’t seasoned beyond large salt crystals (in traditional churrascaria fashion). “We don’t want anything to stand in the way of the meat,” says Pikanha’s owner Thais Silva.

Give your host the nod, and the assault begins: One by one, identically clad, near-silent emissaries approach your table with raised eyebrows and skewers of grilled meat. The pace is relentless, keeping dinner conversations Twitter-length and allowing little time for appetite assessment. The assembly line doesn’t end until you say mercy; for the uninitiated, the experience is dizzying.

Thus, allow me to provide you with a Pikanha’s survival guide. If you’re in the market for a carne carnival, this list of tips should convert the experience from a panic attack to a carefree feast.

Skip the hot buffet. The steam trays are primarily filled with worthless carbs — overdone cafeteria fettuccine in red sauce, rice and pintos, couscous — sure to hoard an undue share of stomach space. Also bypass the watery beef and black bean stew and the boiled chicken. Trust me, gaucho: the churrasco is better.

Have some salad. Feel free to skip the pasty potato salad and the supermarket dolmas at the cold buffet station. But would a few greens kill you? Call it necessary roughage.

Don’t stress about cleaning your plate. Stern menu warnings indicate you’ll be charged a $10 penalty for any uneaten food. This unnerving rule made me feel like a game show contestant, balancing my American desire to maximize consumption with an irrational fear of the penalty. One of my dining companions went so far as to throw a few chicken hearts in the bathroom trash. Insider’s secret: “We never actually charge that fee,” says Silva. “We just want to scare people into not wasting food.”

Don’t accept meat out of courtesy. When you decline one of the proffered meats, there’s an awkward moment where the server shoots you a confused, almost disappointed look. Fogo de Chão provides plastic chips you leave on your table — green indicates you still need meat, red stops the flow — to avoid this personalized pressure. At Pikanha’s, you’ll just need to stay strong.

Be vocal about your preferences. In between servings, all the meat is continually heated on the grill. Naturally some of it will end up browned and crisp, while the fresher stuff is pink and butter-soft. Don’t let it be a crapshoot; you can request cuts that are cooked to your desired doneness.

Expect inconsistency. Some of the meat will be too charred, some will be gristly, and some will be over-salted. Don’t sweat it: There’s more to come.

Drink some water. Speaking of salt, you’re going to ingest more than your share at Pikanha’s. Especially if you’re guzzling the powerful caipirinhas or caipiroskas (made with vodka), you’ll definitely want to hydrate.

Try the chicken hearts. Silva says the American palate is squeamish — we waste valuable time considering how many dead chickens are needed for each skewer of hearts. You’re already here, so don’t overthink it. A few Kalamata-sized hearts, with their chewy texture and dark, musky flavor, are well worth a sample.

Eat the sweets. Several times during the meal, the meat program shifts focus. The host periodically brings over dishes of deep-fried bananas, the hot inner paste a perfect contrast to the pebbly sugared exterior. The servers also carve you slices of grilled pineapple, steaming hot and dusted with cinnamon sugar. These treats provide a bit of relief from the potential tedium of meat on repeat.

At such deep discount prices, the meat sources are predictably murky; don’t expect a Niman steak. Still, some of the beef cuts were quite tender (the picanha was consistently strong) and everything bears the familiar smoky imprint of the grill. Plus there’s plenty of Sriracha, A-1, and Tabasco for those who want a little more flavor costuming.

Pikanha’s scratches a deep carnivorous itch, for the unapologetic diner who puts quantity before quality, taste before health. But at the risk of discouraging repeat customers, even Silva advocates restraint: “You should not come here too much,” she says. “It is not so good for you.”