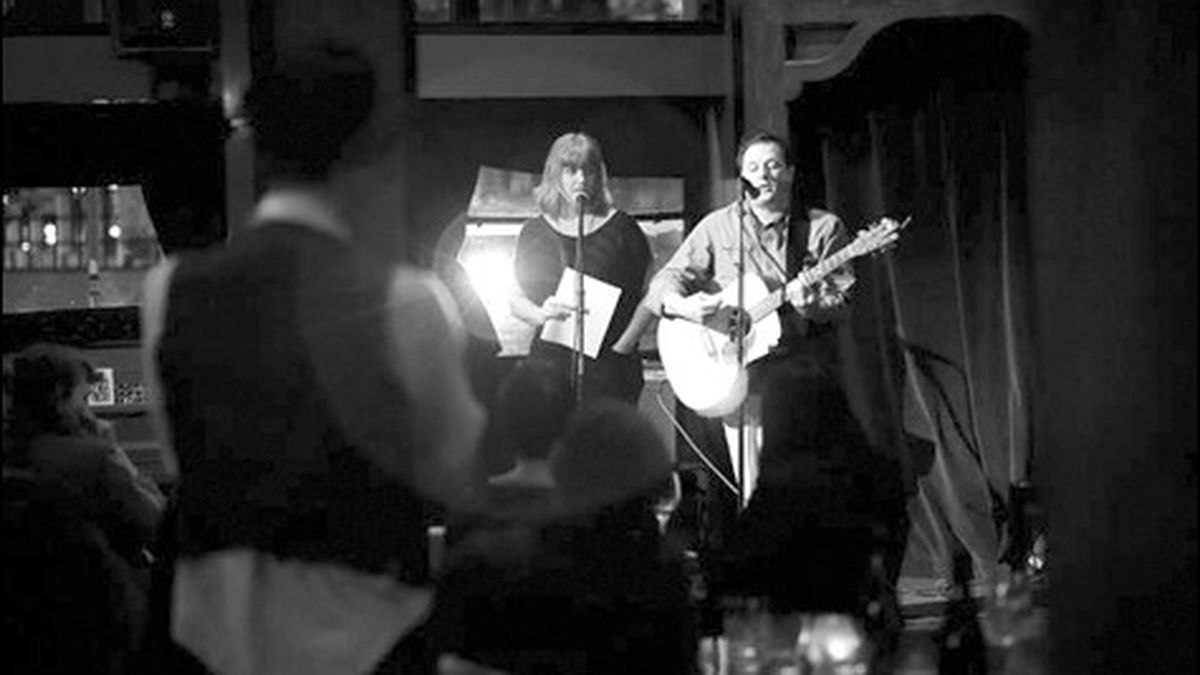 An Oakland storytelling series turns to local musicians for stories and sounds.

“Musicians are, like, natural storytellers right?” asks Kevin Thomson — excitable stagehand by day, guitarist by night. In June 2012, inspired by San Francisco’s ten-year-old Porchlight storytelling series, Thomson decided to start his own Oakland iteration, but turned the spotlight on a specific breed of person he suspected might have particularly interesting stories to tell — musicians.

It turned out, however, that musicians were more reticent than Thomson expected. “Well, one would think musicians are natural storytellers,” Thomson said. “I was right on that count, but I was wrong in thinking that they’d be so eager to share.”

Capitalizing on the timeless-yet-trending theme of intimate storytelling events, Thomson set up his new series, “Hook, Line, and Sinker,” based on the following premise: Musicians lead objectively crazy lives. “They’re travelers right? You spend a lot of time on the road, life is never settled or predictable, and you’re a performer — which is a whole ‘nother bag of tricks,” he said. “But we also tend to hide behind the things we have in our hands or the songs themselves as sort of a shield. Being stripped of that and having to casually tell a story about something that’s happened in your life is actually a pretty difficult thing to do.”

But so far, Thomson has managed to get dozens of local talents to brave the stage; the storytelling event, happening this Wednesday, August 14 at Disco Volante (347 14th St., Oakland), is now just more than a year old. A cast of musicians, assembled by Thomson in advance of each night, is given twenty minutes to tell a story and play two pieces of music, all according to the theme of the evening — with topics as diverse as “Strange Jobs,” “Close Encounters,” and “Exotic Locales.”

Laurie Hall (of the Hallflowers and Knife and Fork) once told an audience about a near-death encounter in Alaska that was resolved over several games of backgammon; saxophonist Jon Raskin spoke intimately of a life-changing experience visiting Christiana, the famous and controversial Danish squat that sat at the center of Copenhagen for forty years; and vocalist Linda Hagood once shared that to get over her deathly fear of rats while living in the lower East Side of Manhattan in the early Eighties she had to convince herself that the scuttling rodents were her spirit animals.

The songs are either entirely separate from the stories or incorporated into the sets themselves, but either way Thomson said the biggest joy comes from bringing together four people a night whose only commonality might be that their lives as musicians occasionally put them in similarly bizarre scenarios. Wednesday’s theme will be “Summertime” (short version), or “Wish You Were: Summertime from the Boardwalk to the River’s Edge.” The night will feature stories from Aaron Valenzuela, Sung Kim, Jamin Barton, and Karry Walker, who will all put aside their reticence to share to bring their different perspectives — and instruments — to the stage. 9 p.m., $5-$10. Facebook.com/HookLineSinkerMusiciansStorytellingSeries

The Gunrunner and the Peacemakers