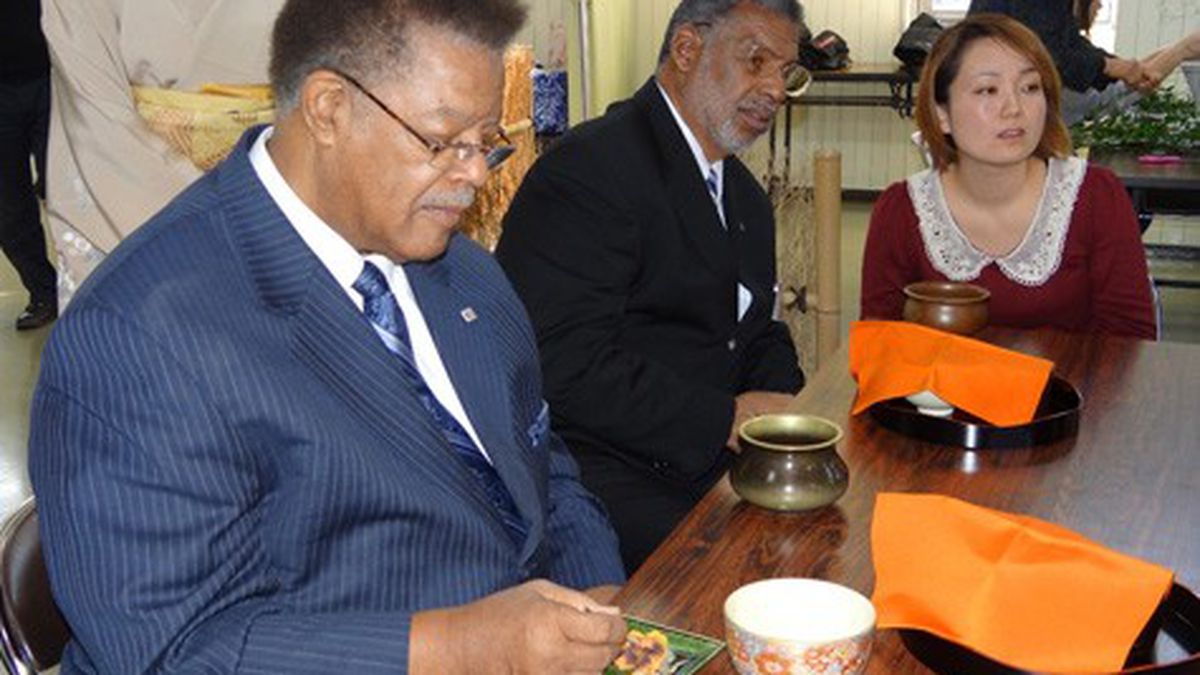 At the last city council meeting before the August break, Richmond’s council chamber looked like it had been taken over by an occupying force. Ten police officers were stationed in groups of two at strategic points near the council dais and around the perimeter of the gallery. At the chamber entrance, there were three more officers handing out official flyers titled, “Warnings About What you Can and Cannot do at a Public Meeting under the LAW.”

The city manager called for the police presence because of a group known as the Men & Women of Valor, a mysterious nonprofit whose members have been provoking chaos at city council meetings, hurling homophobic slurs, and loudly defending Chevron Corporation — the city’s largest employer. The group, whose members are mostly African-American, is a registered nonprofit, but its funding source is unknown because its director, El Sobrante real estate agent Clarence Wise, has not yet filed tax returns for the organization.

While Men & Women of Valor has no clearly stated agenda, it is closely associated with two councilmen who are staunch supporters of Chevron: Vice Mayor Corky Boozé and Councilman Nat Bates. The group’s members are also rabidly anti-gay and have caused numerous disruptions of council meetings. In one instance, the group’s members became so loud and strident that Mayor Gayle McLaughlin cleared the public from the council chamber.

The group’s members also rarely miss an opportunity to harangue McLaughlin, Councilwoman Jovanka Beckles, and other members of the left-leaning Richmond Progressive Alliance, which has held sway on the council since 2010 and frequently challenges Chevron’s policies and practices. Members and associates of Men & Women of Valor also have singled out Beckles because she is openly gay.

For weeks, rumors had been circulating that the group also was recruiting protesters from the city’s homeless population and was paying them to disrupt council meetings. Then at the July 30 council meeting, several people, including me and at least three police officers, witnessed Pam Bilbo, a leader of Men & Women of Valor, handing out cash to people in the chambers. Bilbo denied later that she had been paying anyone to attend the meeting and said she had no knowledge of hiring protesters.

Councilman Tom Butt wrote in his popular email forum that he believed Chevron was indirectly funding Men & Women of Valor to discredit the mayor and the Richmond Progressive Alliance. He cited Chevron’s continued support of Bates and Boozé, who he said have been encouraging the council disruptions. In another forum item, Butt called the group “Corky’s Army,” after members of Men & Women of Valor showed up at Butt’s Point Richmond architectural office to protest his decision to not support a gun control proposal sponsored by Boozé that Butts considered redundant.

Chevron’s public affairs manager, Heather Kulp, later demanded Butt retract his comments and said that his attempt to “connect the dots” between the oil giant and the nonprofit group was unfair and entirely false. “Chevron has not and would not fund the activities or actions of this group and we denounce hate speech in any form,” she wrote in an email to Butt. “In fact, Chevron is a strong supporter of the Lesbian, Gay, Bisexual, Transgender community, not only in our community, but also with our employees.”

Chevron public relations firm Barnes, Mosher, Whitehurst, Lauter, and Partners, which has been involved in recent political campaigns in Richmond that have also been racially charged, including last year’s fight over a proposed soda tax, also denied having anything to do with Men & Women of Valor’s council disruptions. “We would never be involved with that kind of ridiculous practice,” said Vice President of Media Chuck Finnie. “It would be incredibly disrespectful to the Richmond community. We do visible grassroots organizing.”

Members of Men & Women of Valor make no effort to hide their bigoted views. In June, while the council was considering approving a LGBT Pride proclamation, members of the group, along with an associate, former mayoral candidate Mark Wassberg, became particularly hostile toward Councilwoman Beckles. Reverend Wesley Ellis, another of the group’s leaders, stepped up to the podium and addressed Beckles directly: “You’re just a little girl trying to be a boy and don’t even have the tool for it.” Bilbo also spoke against the proposed proclamation. “I hate the thought of a woman lickin’ on another woman’s vagina,” she said, according to city council video that is available online. “I hate the thought of a man putting his penis in another man’s butt.” Wassberg addressed the council by saying homosexuals and lesbians are lower than animals and that Bilbo “is right, Beckles licks vagina.”

Bates has supported the group from the council dais, but Boozé is more often associated with its members. Boozé has been a controversial figure since he was elected to the council in 2010. The city is currently suing him for a blighted 2,800-square-foot property that he refuses to clean up. He also has pending complaints against him with the California Fair Political Practices Commission, and he was accused of physically attacking his former chief of staff, a 65-year-old woman who at the time of the alleged attack was recovering from hip surgery.

Beckles said Boozé has never said anything to her that could be construed as homophobic, but she said he has shown support for the group during council meetings. “He goes into the gallery during meetings and shakes their hands, pats them on the back, and whispers to them,” Beckles said.

Boozé, however, denied he has any influence with the group. “The people on the street respect me and I listen to them and try to do what I can for them,” Boozé said. “I’m not happy with what they do sometimes, but I can’t tell them what to do.”

Boozé said he strongly disagreed with the group’s homophobic remarks. Weeks after the incident of overt bigotry at the council meeting, he issued a press release denouncing it and reasserting his support for gay marriage and the rights of the LGBT community.

Months of council meeting disruptions by Men & Women of Valor reached a boiling point during the July 23 meeting at which the council was considering an item that would allow city officials to inspect the Chevron refinery. During the meeting, members of Men & Women of Valor and their associates suddenly broke into a rendition of “I Shall Not Be Moved.” McLaughlin called a five-minute recess, but after the council came back into session, a member of Men & Women of Valor pulled out a bullhorn and began shouting through it as police escorted him from the council chamber. Fellow members of the group then began taunting members of the Richmond Progressive Alliance and at one point Bilbo stood in front of the gallery and yelled, “I’ll shut this whole city down. I will stomp my feet and slide this whole city into the water!”

Finally, the mayor cleared the council chambers and the public watched the remainder of the meetings on monitors in the hallway. City Manager Bill Lindsay and Police Chief Chris Magnus had had enough. The disruptions or “protests without a cause,” as one council watcher called them, have pushed council meetings late into the night and made it difficult for the council to do the city’s business.

At the next meeting there was a heavy police presence and everyone who entered the chamber was given a sheet of paper that spelled out rules of conduct. “The police did a very good job of keeping order and we had one of the best meetings that we’ve had in a long time,” Lindsay said the next day. “There have been no complaints or negative reactions at all.”

The council is on its summer break and several council members said they hope things calm down by the next scheduled meeting in September. If they don’t, Lindsay said the city is prepared to continue with a heavy police presence at city council meetings. “Of course it’s the last thing we want, but the chief has done such a good job that we can carry on with the same policy indefinitely.”