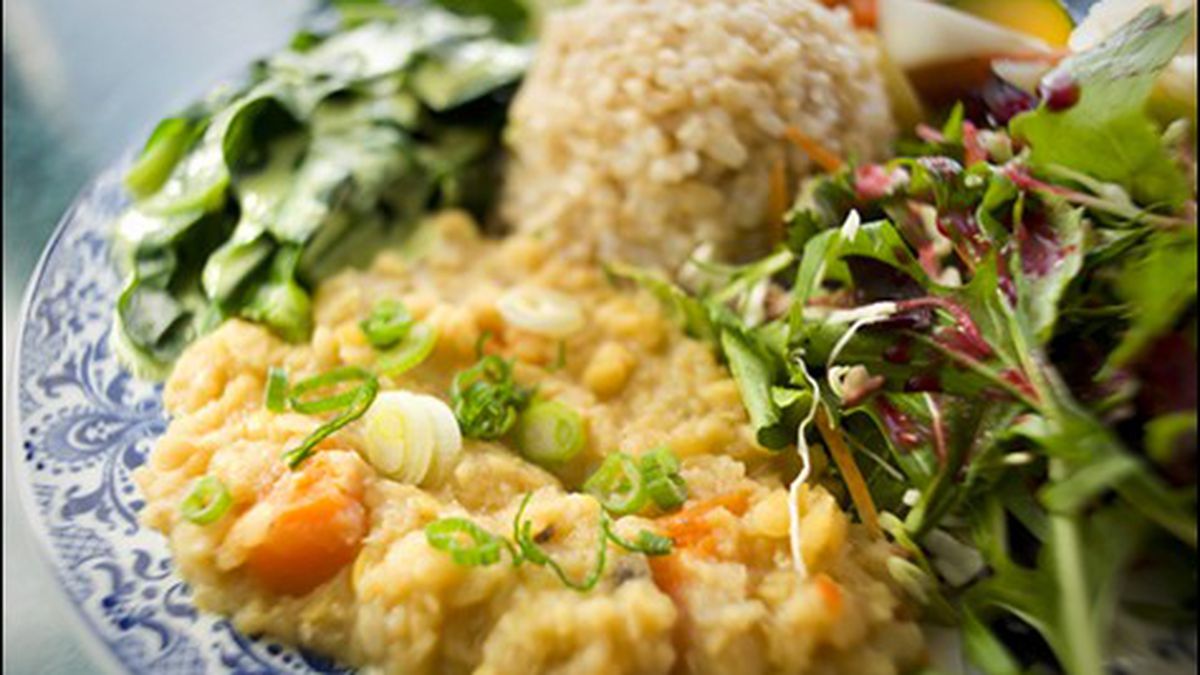 Everything is vegan and healthful at Potala Organic Cafe, but don't hold that against it.

For those who eat out for sensory pleasure, a macrobiotic diet sounds about as sexy as a colonic. Steamed whole grains, beans, and veggies, seasoned only with soy sauce or sea salt, comprise the core of most meals. The list of dos and don’ts are intricate, and can seem arbitrary to an outsider (collard greens yes, spinach no). The diet even makes suggestions on how much to chew before swallowing, an approach as earnest as it is unappetizing.

Potala Organic Cafe, a new restaurant on the Albany/Berkeley border, may be giving macrobiotics a PR makeover. The technique is simple: less preach, more flavor. Potala’s chef is a Tibetan immigrant who goes simply by Tenzin, claiming his full name would confuse most Westerners. This abbreviated name also conveys his Cher-like star power in the East Bay’s macrobiotic scene.

Tenzin captained the kitchen for fifteen years at North Oakland’s Shangri-La Vegan (formerly Manzanita, and Organic Café before that), earning a cultish following for his solid, if stripped-down, vegan fare. In a review of Manzanita, Express critic Anneli Rufus decried the lack of seasoning in dishes “whose earnest plainness, depending on your mood and allegiances, evokes either Zen monks or zombies … either purity or poverty.”

For the first time, Tenzin is now co-owner of the restaurant where he works. Like many chef-to-owner transitions, this has freed him up to branch out, expanding his flavor pool past Shangri-La’s skeleton portfolio. Tenzin cautions that Potala is not strictly a macrobiotic restaurant, as he occasionally throws in verboten veggies like potatoes and bell peppers. But for the most part he hews to the spirit of a macro diet, if not the letter. Also: Every item is vegan and 100 percent organic.

Potala is housed in a squat, tan cement building on San Pablo Avenue, in the nondescript flyover country between Berkeley and Albany. These homely digs are parodied by vivid signage bearing a photo of the majestic namesake — Potala Palace in Tibet.

The entrance is a battered and wooden residential-style door, with a brass thumb handle that belongs on a tract house in the ‘burbs. Inside, you spill into the center of a circular dining area, affording the momentary panic of being on stage. On the right is an incongruously handsome wooden bar, a holdover from the Thai restaurant that occupied the space before (East Bay favorite Ruen Pair). Now, the markedly booze-less bar holds dozens of paper lanterns and now-useless cocktail glasses. From the “Visit Thailand” travel posters on the wall to the fake tropical plants strewn about, Potala’s décor is in transition.

A dry-erase whiteboard near the bar is Potala’s only menu. Options change every day, and the eco-friendly board avoids wasting reams of paper. Similar to at Shangri-La, most diners opt for the eminently affordable prix fixe. Prices for this seven-item meal range from $11 to $14, depending on the chosen size and whether it’s lunch or dinner. While calling it seven courses is a bit of a stretch — modest portions of most items are served on the same plate — even the smaller lunch meal will leave you stuffed. For smaller appetites, any menu item can be purchased à la carte for $3.95.

You can also order the “simple meal,” a steamed four-item prix fixe with no oils, seasoning, or flavor. “Very boring, only order if you have allergies,” warned the tiny, parka-clad server. On one visit a well-intentioned friend ordered the simple meal for her six-year-old niece. The child left her monastic dinner untouched; I can’t say I blame her.

The regular meal starts with soup. I tried an excellent miso with puréed beans, broccoli, and root vegetables, well-salted and studded with little carrot bits and pieces of scallion. Another soup, French lentil with onion and rutabaga, was journeyman’s winter fare: satisfying but not spectacular.

The main attraction follows the soup — a generous ice-cream scoop of quinoa and brown rice in the center of a plate, ringed by more colorful offerings. The whole grains are the most basic item in the mix, unseasoned and overcooked to a nursing-home mush. I tried to gussy them up with toasted sesame seeds, cayenne, and tamari (standard on every table), but couldn’t mask the lifelessness.

Other items compensated for this misfire, including a well-dressed mixed-greens salad with sweet beet balsamic vinaigrette. Accompanying collards were steamed to the perfect chew, drizzled in a bright sunflower carrot ginger sauce. Mixed vegetables were sautéed in olive oil and generously salted, cooked just shy of losing body. On one visit, the veggie mix was strips of cabbage, carrot, and shiitakes; on the other it was carrot, cauliflower, and burdock (this semi-bitter macrobiotic staple is an acquired taste).

My favorite dish was what Tenzin called “bean cake,” soft red beans slow-cooked to a refried consistency, topped with a creamy tofu parsley sauce. Another day, the bean dish was pintos with onions, well-cooked but in need of a spry seasoning.

“Dessert” is a little swirl of yam and carrot puree around a circle of tahini, with a beet bulls-eye in the center. Topped with sunflower seeds and sweetened with agave, this one had the delicate look of an amuse-bouche. The tahini proved too rugged for a dessert item though, leaving me feeling strangely duped (what, was I expecting profiteroles?).

I read an article recently about a new way of thinking about macrobiotics, a relaxed, global approach that allows more spicing and vegetables native to one’s home climate. Perhaps Tenzin is on the vanguard, a raffish macro-artiste that traditionalists might call dangerous. He slips in no-nos like beets and potatoes, willing to make concessions in the interest of the palate.

Potala may not feature pork belly or béchamel, but it far outshines many dogma-based eateries (e.g., Café Gratitude) and you hum like a clean-burning engine when you leave. To improve your health, there are far bitterer pills to swallow.