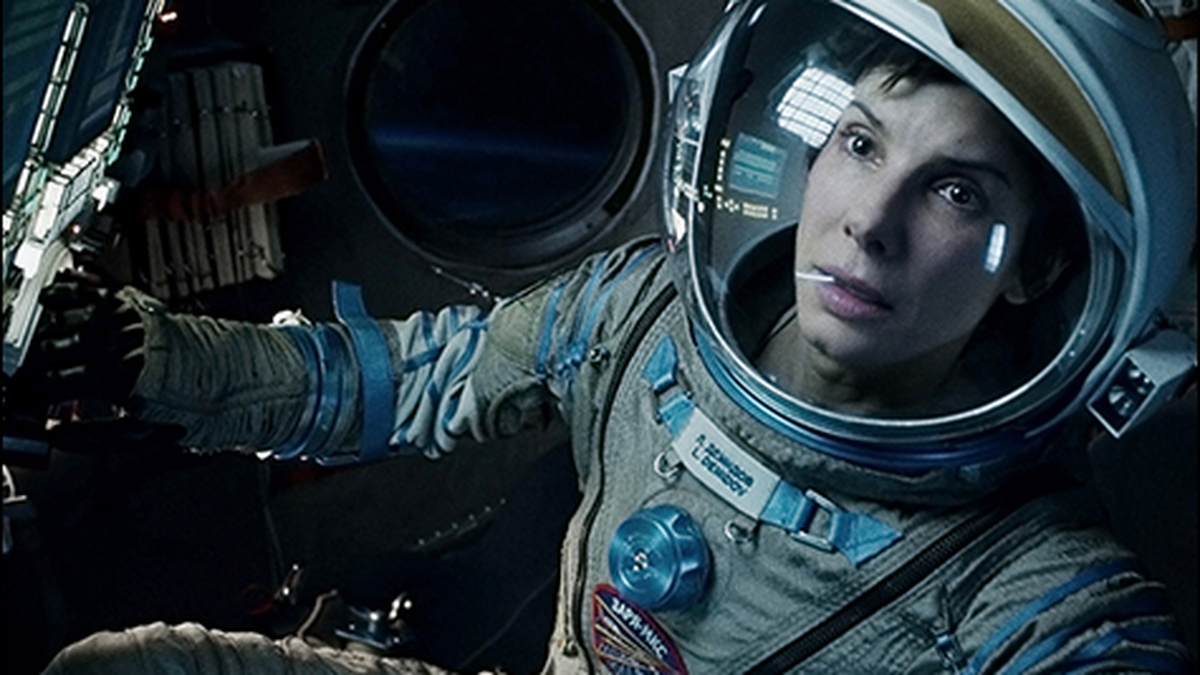 Alfonso Cuarón’s Gravity is the most exciting science-fiction space adventure ever made.

The precise hows and whys of the story line are difficult to discuss in detail without spoiling key plot surprises, so let’s boil it down to this: Two US space-shuttle astronauts, mission commander Matt Kowalski (George Clooney) and medical technician Dr. Ryan Stone (Sandra Bullock), are outside the craft engaged in routine maintenance, 600 kilometers above Earth, when an emergency — something about an accident with a Russian missile — suddenly changes everything. From then on, the movie is a nonstop chain of rapid-fire, cause-and-effect events so nerve-wracking and intense that we immediately forget about practically every sci-fi movie we’ve ever seen. The only thing we can cling to, like the two astronauts clutching for a handhold on the edge of the abyss, is this thought: What’s the next step?

It would be nice to say that Clooney and Bullock have meaningful “chemistry” between them as teammates on the SDS 157 Explorer, but the two actors play their scenes together entirely encased in flight suits and helmets, often weightlessly drifting away from each other. Their intercom voices are just as important as their facial expressions. Clooney’s Matt is the classic nonchalant “right stuff” flying jock, cool and unflappable, always clowning around but likewise always able to calm down Ryan when she’s on the verge of panic. Matt is an experienced pilot; Ryan only knows flight from her training and needs to consult a manual. We’ve seen Clooney as a similarly wised-up, take-charge military man in such tales as Three Kings and The Good German. It’s a part he could play in his sleep, but that doesn’t mean he’s not ideal as the second banana in orbit.

The movie belongs to Bullock. In fact, we could see Gravity as a hair-raising, emotionally draining female empowerment story in which Ryan, who’s nursing a bad tummy when the going first begins to get rough, rises to the occasion with a strength she didn’t know she had in her. Bullock is one actor who’s exactly as good as the script she has to work with. The screenwriters, director Cuarón (Children of Men, Y Tu Mamá También) and his son, Jonás Cuarón, are evidently on a mission to set up the perfect combination of heroic physical action and those brief, insightful moments that give a character depth. Ryan Stone, as it happens, is still grieving for the loss of her young daughter, killed in a school accident. So she needs to overcome an inner, emotional obstacle in addition to the frightening external ones flying at her. Bullock’s performance has a strong thread of maternal perseverance in it, à la her Leigh Anne Tuohy in The Blind Side, despite the fact she spends half the movie bobbing around in space.

There is no religion in Gravity — unless we count the brief, sly glimpses of a Christian icon and a Buddha, respectively, in the Russian and Chinese space stations. All too many extraterrestrial spectacles, from 2001: A Space Odyssey downward, have sought to explain the mysteries of “up there” using spiritual metaphors. Most of them are clumsy and obvious. The adventures of Ryan and Matt pointedly have nothing to do with supreme beings or universal truths. Ryan does her “phoning home” in a simple, poignant scene, the crux of the film. If anything, their struggles have the utilitarian, utterly secular flavor of military procedure, at least until the film’s climactic shot. There’s a job to do and they need to do it quickly, or die. No time to search for god.

These motifs would be a minor footnote, however, if the visuals weren’t extraordinary. Visual effects supervisor Timothy (Avatar) Webber and his crew, encompassing at least five VFX shops, produce high-tech effects of unprecedented sophistication. The hectic action sequences are so thrilling that we lose the “wow!” factor that comes when 3D is especially sharp and imaginative — the 3D just simply disappears into the overall panorama and becomes one with the overwhelming kinetic force of what is happening onscreen. Emmanuel Lubezki’s cinematography works in tandem superbly with the astonishing effects, and Steven Price’s music underscores the furious action. Overall, the production values are the most dazzling we’ve seen in thirty years reviewing movies.

Once we sort through the procedural aspects of Gravity, it’s clear that Alfonso Cuarón’s overarching themes are definitely at work in Ryan’s journey. Bullock’s reluctant astronaut has more in common with Harry Potter — the director made Harry Potter and Prisoner of Azkaban, the best film in that series — and little Sara Crewe, heroine of A Little Princess (1995), than it might seem on the surface. Whether tossed in a chaotic storm of exploding debris or navigating the hostile anti-immigrant England of the near future (Children of Men), Cuarón’s perennial underdogs are forced to fight to assert their basic humanity. Everything else is expendable hardware.