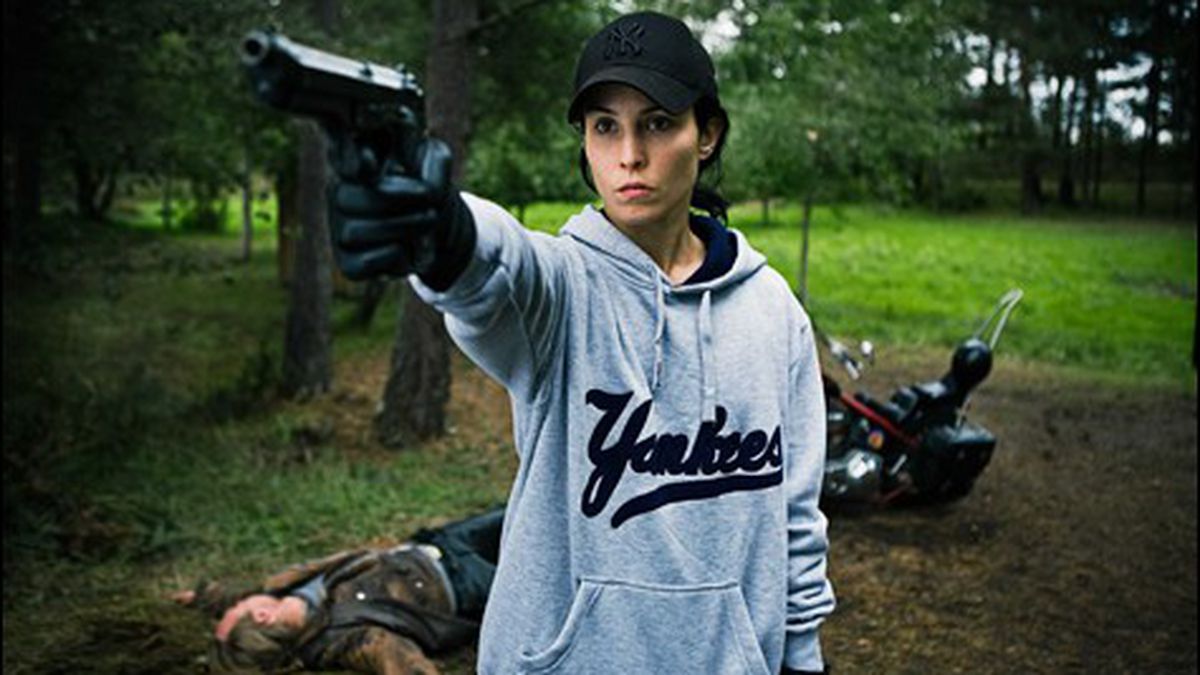 Swedish avenger (The Girl Who Played with Fire) and suburban lesbian moms (The Kids Are All Right).

Anybody can wear a dragon tattoo, play with fire, or kick a hornet’s nest, but there’s only one Noomi Rapace. The 31-year-old Swedish actor (née Noomi Norén) created such a sensation in Niels Arden Oplev‘s surprise art hit The Girl with the Dragon Tattoo that she seemed born to play the role of tattooed, pierced, black-leathered, female avenger Lisbeth Salander. Ms. Rapace is now the public face of the trans-Atlantic pop-cultural phenomenon, which began with author Stieg Larsson‘s posthumously published “Millennium Trilogy” of novels — 21 million copies sold since 2005, according to the publicity — and which is still thundering onto US movie screens.

The Girl Who Played with Fire, the second film in the series, is a thoughtful but bloody advance along the lines of Dragon Tattoo as well as a deeper investigation into the puzzling, emblematic lead character. Lisbeth evidently has no end of scores to settle.

It was the sympathetic Mikael, you’ll recall, who teamed up in Dragon Tattoo with the initially wary Lisbeth to thwart a family of Nazi-esque Swedish industrialists guilty of abducting and mutilating young women — Lisbeth’s number-one issue. For all her riot grrrl attitude, Lisbeth is the ideal professional victim. She developed her fighting skills after being raped, tortured, and wrongfully institutionalized in her youth, but seems forever doomed to become yet again the unwilling plaything of ugly, flabby, perverted old men, the kind who are in urgent need of having the words “I am a sadist pig and a rapist” tattooed on their chests. Larsson and his adaptors thus manage to have it both ways: They put on a lurid sadomasochistic peep show, then deal out the righteous punishment for it.

Mikael’s main function in the trilogy is to act as Lisbeth’s guide dog, sniffing out messes for her to clean up. He has his career and a girlfriend named Erika (Lena Andre) but he remains devoted to the girl with the tattoo, even from a distance. Journalist Mikael and computer hacker Lisbeth spend the least time together of any crime-fighting team in history. They never meet face-to-face until the finale of Played with Fire — their preferred means of communication is the Internet.

At its crackling best, the Girl series spins a Bourne Trilogy-style tapestry of psychological dis-ease, corruption, and revenge. At its flimsiest, Lisbeth and Mikael’s energetic punch-outs with the sinister Zala (Georgi Staykov) and his robotic blond behemoth Niedermann (Micke Spreitz) more closely resemble the antics of Agents Mulder and Scully on The X-Files or its boob-tube antecedent, The Night Stalker, with reporter Carl Kolchak battling headless bikers and vampires. The crackling best generally outweighs the flimsiest, thanks in part to the confused chemistry between actors Rapace and Nyqvist.

But the trilogy’s lasting appeal is in the lean and hungry face of solitary seeker Lisbeth, perched on a windowsill gazing out on the nighttime sights of Stockholm, like a gargoyle. Anonymity is her secret weapon. Androgynous Lisbeth’s investigations are aided by the fact that in a hoodie she looks like any teenage boy. Actor Rapace (she’s married to actor Ola Rapace) has worked in Swedish TV and on stage, but her Lisbeth Salander is the role of a lifetime, a deadly yet vulnerable character who ends up relying entirely on herself — despite the occasional tryst with her friend Miriam (Yasmine Garbi). The Girl Who Played with Fire is more about establishing basic trust between human beings than catching the bad guys. We’ll have to wait until the third and final adventure to see if the center holds. The Girl Who Kicked the Hornet’s Nest, produced in 2009 and having already played Europe, opens in the US in October.

Don’t take my word for it, but it looks like we’re entering some sort of golden age of indie movie character roles for actresses of a certain age. Case in point: Lisa Cholodenko‘s wryly hilarious The Kids Are All Right.

Joni is preparing to leave for college as the action opens, and as a parting project her brother enlists her to help him locate their biological father, without the moms’ knowledge. Cut to the bio-dad, Paul (Mark Ruffalo), a dedicated bachelor who runs a popular nearby restaurant. It’s the work of a minute to find him, and immediately Joni and Laser begin joyously bonding with their fun-loving new “dad,” who’s gratified and intrigued by his offspring. Paul approaches his new “family” with a certain hang-loose charm. Naturally the moms get jealous, but Jules also begins to display a bit of curiosity about Paul. Hmmm.

You can guess what comes next. If not, then you probably missed director Cholodenko’s Laurel Canyon, another slice of SoCal liberated-female life — not to mention Pier Paolo Pasolini’s Teorema. In fact, The Kids Are All Right could very well be the pilot for a new Comedy Central series about the antics of a pair of zany lesbian mothers trying to raise their teenagers. Well, yes and no.

Cholodenko and screenwriting partner Stuart Blumberg have a keen eye for the telltale details of contemporary California urban life: the obsession with landscaping, Scrabble, Nic’s fondness for wine, Nic’s Volvo station wagon (vs. Paul’s motorcycle), Joni Mitchell’s Blue, etc. But it’s really the troika of Bening, Moore, and Ruffalo who do the work. In fact, scratch Ruffalo — the last shot of the movie tells us all we finally need to know about Paul. It’s Bening and Moore’s show. Put them in a row alongside, say, Catherine Keener, Patricia Clarkson, Marisa Tomei, Susan Sarandon, Laura Linney, Sissy Spacek, Melissa Leo, and Julianna Margulies. Zap! It’s a golden age.

Lewis: Did I Mention I Wrote a Book About the Oakland...