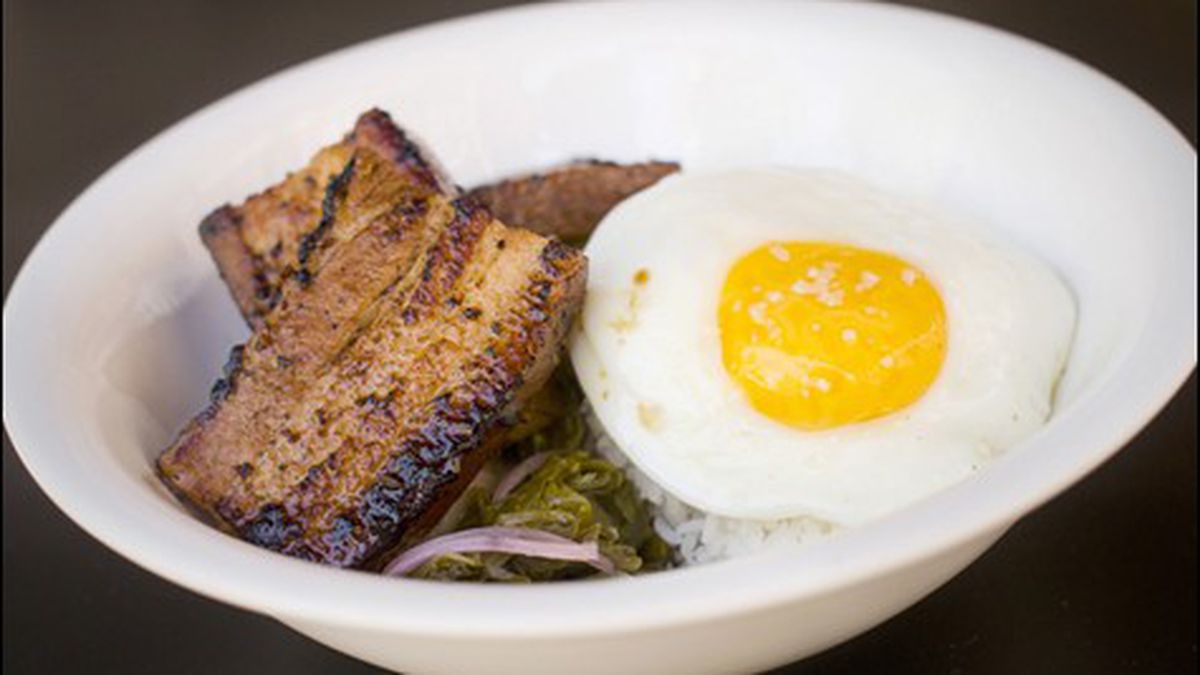 Hawker Fare — James Syhabout's Asian rice-bowl shop in Uptown — is an ode to a memory of Oakland.

Every good restaurant has a dish you can point to and say, That’s it, the thing that distills the chef’s intentions into a concise statement of purpose. At Hawker Fare — the seven-week-old Asian rice-bowl place from Commis chef James Syhabout — it’s the Siamese peanuts, appropriately enough the first thing listed on the Uptown restaurant’s short, inexpensive menu.

First thing that hits you, even before you dip into the bowl packed with darkly roasted peanuts, is the smell, a rolling funk of shrimp paste skimming a contrary current of palm-sugar caramel. Chewing releases a range of aromas, from fishy to nutty to peppery to anise-y, before settling back again into fishy. You’re unsure if you should attack the sticky mass with your fingers or deploy a fork; choose the former and be prepared for reeking hands, as if they’d logged some time with your body’s darkest, dampest places. It’s what makes the Siamese peanuts so delicious — that mix of funk and fleeting perfume, in a way that feels slightly forbidden.

And they offer a hint about Syhabout’s attitude with this place, which is sort of, Screw everyone’s expectations. He’s already got a fine-dining restaurant with a Michelin star and New York credibility. What he created is the kind of place you seek out after pulling a double shift, sweaty, craving beer and a mixtape soundtrack seeded with Handsome Boy Modeling School.

Syhabout says he just wanted to have fun here: “Blow off steam, be reckless, cook what I wanted to cook,” he explained over the phone. I ask if anyone’s complained about the Siamese peanuts tasting fishy. People have, he acknowledges, then says that if he could, he would have made the shrimp paste stronger.

“That’s the problem with Thai places here; the food’s dumbed down,” Syhabout said.

And though the menu at Hawker Fare references market-stall food from Bangkok to Chiang Mai to Vientiane, the restaurant is above all an expression of Syhabout’s deep connection to Oakland, a remembrance of food past, dishes encountered in two decades hanging around his mother’s kitchen. Syhabout called it “cooking off childhood memories” of northeastern Thai food — the fermented fish paste in Hawker Fare’s slightly too-sweet version of som tum (green papaya salad), the fish sauce cooked into kiao pak, rice congee topped with bits of thousand-year-old egg and chicken crackling.

They’re memories Syhabout doesn’t have to go far to trace. The chef grew up about three blocks from here, at 25th and Telegraph. Plus, till late last year, Syhabout’s mother, Da, cooked in a restaurant she owned — Manyda Thai Cuisine — in the very space Hawker Fare now occupies.

Recasting the space meant giving form to Syhabout’s own experience of hard-pavement, b-boy Oakland. He found a graffiti artist who lives across the street, a guy by the name of Rich, to free-hand the back wall with an old definition of “hawk”: to “sell goods by outcry in the street.”

There’s a hint of uprising in the phrasing, which fits the hero’s gallery of mostly band posters Syhabout assembled on the wall below, all of which have an Oakland connection.

And that hint of uprising? Like with those super-fishy Siamese peanuts, it’s also an apt reflection of Syhabout’s I’m-cooking-what-I-fucking-want-to-cook approach to the food.

With its fermented mung bean paste and black soy, the dipping sauce has a whiff of Chiang Mai, slashing contrast to the pale refinements of moist, barely cooked, big-grained chicken and quietly unctuous rice. For relief: plain slices of cucumber, and frilly tufts of flowering cilantro, more than a hint of anise in the taste. (Syhabout shops the Old Oakland farmers’ market for produce and eggs from the mostly Southeast Asian farmers who truck in from the Central Valley.)

The kitchen leaves the immersion circulator going all night for the rice bowl called 24hr pork belly, Syhabout’s modern take on tom khem-style marinated and braised pork. Here it’s smeared with house-made five-spice powder and sweet soy, cooked sous vide for a full turn of the clock and seared. It doesn’t emerge with the fragile, jiggly texture I imagined, but chewier, more rustic — you have to pry apart the layers of fat and flesh with fork and spoon, a quality that, by the second time I ordered it, totally seduced me. It was more evidence that Syhabout isn’t trying to make the food ethereal or delicate just because he can.

It comes with tart, vinegar-pickled mustard greens and thin-sliced fennel, and a sweet-salty-hot dipping sauce of mustard and hoisin you taste in your nose, like wasabi. For an extra buck-fifty you can add a fried egg to any of Hawker Fare’s half-dozen rice bowls. It’s probably nowhere more welcome than here, where the semiliquid yolk turns the rice into a rich, sticky field that finds equivalence in the pork.

Actually, I take that back about Syhabout laying off the ethereal as a matter of principle. When he wants to, he can take a hackneyed Thai restaurant dish like coconut-milk green curry, break it down, and reassemble it with all the Commis-grade intelligence in his arsenal. The result: vadouvan tofu, silky squares of bean curd, bamboo shoots, and nearly purée-soft tufts of fried cauliflower in a remarkably suave, un-sweet, and pale green coconut sauce with the house-made curry mix known as vadouvan, a staple at high-end places Coi or Manresa.

Call it counter-intuitive. Call it fucking with expectations. Call it straight-up Oakland.