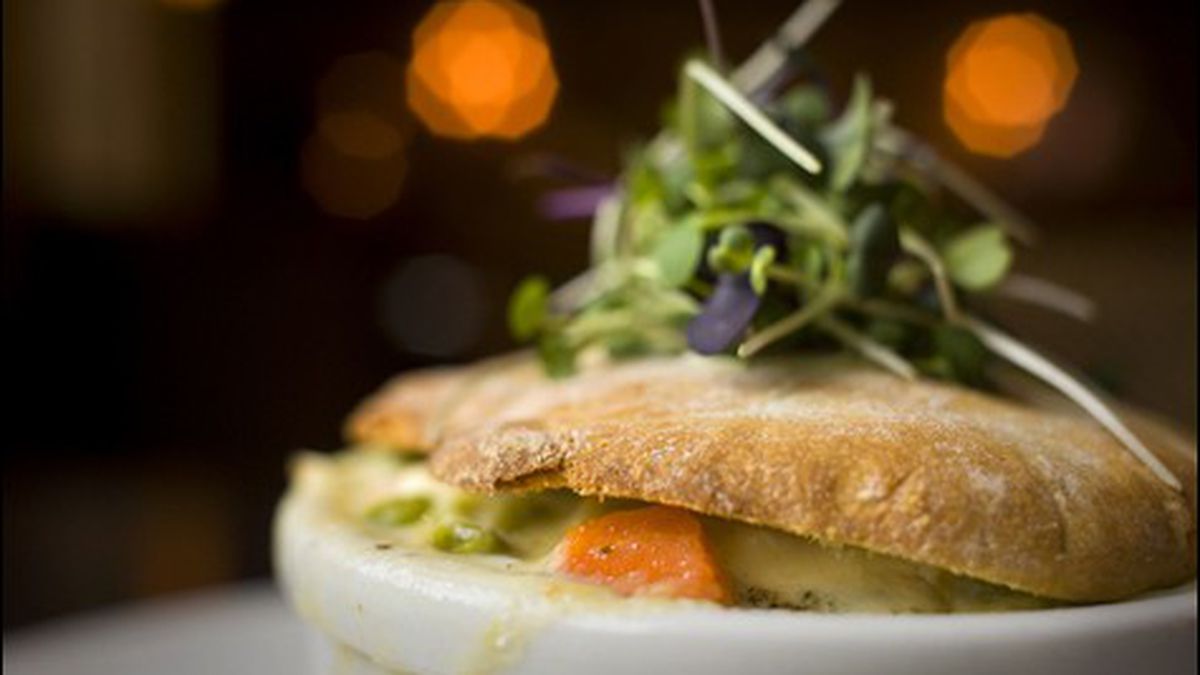 The restaurant Adagia was something of a campus anomaly. Housed in a former Presbyterian church building near a row of UC Berkeley frats, Adagia went light-years beyond wraps and fro-yo; its high-concept farm-to-table fare was served in a sophisticated, burnished-wood space that dared to take itself seriously. But the restaurant struggled, and owner Daryl Ross (head of the campus mini-empire that includes Caffe Strada and the Bancroft Hotel) decided to shut it down last summer for a complete overhaul. Now it’s back, and ready to party!

Freehouse is Adagia 2.0, a revamp that seems calculated to appeal to the broadest college denominator. Instead of its previous Harvard Club-style gravitas, the restaurant features chairs with a fuzzy jungle-print fabric, servers wearing T-shirts, and a lively bar (with flanking flat-screens) as the room’s focal point. The huge gas fireplace, which former Express critic Jonathan Kauffman said instilled Adagia with a sense of history, is now surrounded by overstuffed couches and easy chairs. Younger patrons sprawl on the furniture with cocktails in hand, looking like extras from a 1980s ski-chalet skin comedy.

Furthering the populist vibe, Freehouse’s sign uses a font poached from Soviet propaganda posters, set off by a single star in the “R.” Freehouse does all it can to reject any lingering pretense from its predecessor (“I never really had a connection with Adagia — I didn’t go to places like that,” Ross admitted to the Daily Cal). Reservations are no longer accepted. Everyone seats themselves. And, by gosh, the food is less high-falutin’.

The new menu has three no-frills, bro-friendly categories: Bites to Start, Bites Between Bread, and Main Bites (contrast Adagia’s comparatively fey Grazing, Land, Ocean, and Farm and Pasture). Expect pub faves like wings and burgers, but with delicate accoutrements like herb-marinated tomatoes, chipotle crème fraîche, and julienne mint. Pulled pork comes with jicama slaw; wings are served with organic radish. Farm shout-outs are minimal, though the fine print shows they use sustainable ingredients when possible: “Not because everyone else does it, but because it is the right thing to do.” Okay then.

Chef Kevin Kroger last worked at Monk’s Kettle, an upscale beer bar in San Francisco’s Mission District. Freehouse shares a similar sense of priorities with this other spot; the massive beer list and the dinner menu battle for your attention. After my visits to Monk’s Kettle, memories of the indistinct food always seemed to wash away in a river of imported lager. The food at Freehouse was more memorable, but not always for the right reasons.

A vegan mushroom chili used a distinctive chocolate-and-cinnamon base, but pockets of coldness distracted me (and the dish’s quick arrival indicated a microwave-reheat). Two side orders of fries were served at room temperature. The over-grilled Loch Duart salmon was desiccated and shrunken, lost inside its big Acme bun like a kid in his dad’s suit. I ordered a grass-fed burger, but got a lamb patty instead. Still, I decided not to send it back — I felt sporting by my second pint — but I should have returned it for being overdone. (Ordered medium rare, it lacked any hint of pink.)

Blandness plagued some other items. Rich cheddar pilsner sauce failed to make a doughy food-court pretzel interesting. A seasonal soup of puréed fava beans, snap peas, and asparagus, seasoned with mint oil and lemon crème fraîche (possibly the most Adagia-esque item I tried), was unexpectedly flat. The beer-poached mussels were juicy and tender, served in a broth with diced tomato, garlic, shallots, and fresh herbs, but its seasoning was barely detectable.

The menu did hold a few pleasant surprises. Savory black-bean cakes made a nice opener, served on a tall bed of corn salsa that was good enough to eat on its own. A textured white bean cassoulet came with a crispy Parmesan bread-crumb topping and ovals of grilled bread on the side. Generous amounts of applewood-smoked bacon, sausage, and duck confit almost upstaged this dish’s mirepoix foundation, but fat from the meats infused it with a deeply rewarding richness.

The Freehouse pot pie is built on a conventional base of carrots, onions, celery, turnips, and peas, but its main ingredient is switched out regularly. Truffles took the limelight when I visited, a surprisingly upscale centerpiece for a $12 dish. Like the meat in the cassoulet, the mushrooms’ potent flavor pervaded its accompanying gravy. The biscuit-like top crust was thin and crumbly, but the creamy insides were lush and incredibly savory.

Service ebbed and flowed at Freehouse. Sometimes it seemed like we had four servers working in tandem to create a dazzling Carnival Cruise-level of eye contact and attentiveness. Then it would drop off for long periods, and I would wonder when we were getting water or when my friend would get some silverware. Our dirty dishes hung out for so long after the meal, I briefly wondered if it was a bus-your-own-table restaurant.

But I have to say: Applying the typical restaurant-critic standards here makes me feel a bit fussy. Even though it’s Adagia’s replacement, and its menu shows a bit of ambition, Freehouse is essentially a college brewpub. It’s a place that was closed for spring break when I recently arrived to review it, and that’s physically attached to a student-housing complex. As one commenter on Chowhound put it, Freehouse “is NOT a destination. But it’s very much a welcomed addition to the campus options.”

As such, Freehouse is successful. It’s a good-looking, offbeat space to hang out in, like a cocktail party in a church. The food isn’t great, but it gets the job done. Price points are low, with few items running over $12. And you don’t have to stray far from school.

School Dropout Rates: On the Other Hand…