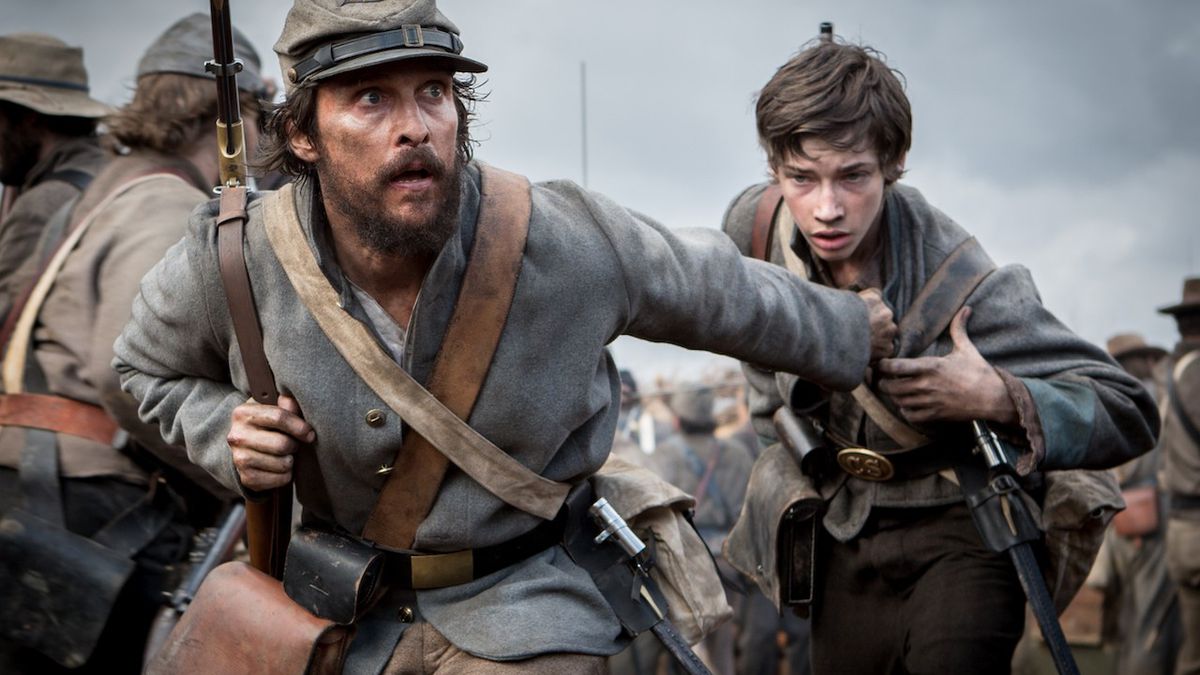 Free State of Jones: Light in the Wilderness

Communes in 1865 Mississippi and other improbabilities.

by Kelly Vance
Jun 30, 2016
A few late notes on Free State of Jones, one of the most remarkable movies of the year so far, for more than one reason:

The ongoing cinematic rethinking of the Civil War takes a decisive leap forward with writer Leonard Hartman and director Gary Ross’ drama, which shows a side of the conflict most of us never knew existed — the true-story resistance of a conscientious Confederate soldier named Newton Knight (Matthew McConaughey) against the concept of slavery. That is, a revolt against a rebellion, in the heart of the Old South, led by a small band of renegade Johnny Reb enlisted men and their unlikely allies, a group of runaway slaves.

We’ve already seen Texas native McConaughey bring his authentic Southern-ness to such films as Dallas Buyers Club, Bernie, and Mud, but his Newton Knight is another breed entirely, a relic from an era moviegoers had safely filed away. From his perspective as a battlefield medic, spattered with blood and grime, Newton decides that as a poor sharecropper, he has very little stake in fighting to uphold the profits of slave-owners.

Several of his army buddies agree, and so when Newton finds himself back on his family farm he and his friends desert the Confederacy and take to a nearby swamp, where they lead raids on rebel troops and eventually declare their corner of Mississippi a part of the Union. Runaway slaves are welcomed as free members of the new state. Racists are banished. Newton even goes so far as to run the Free State of Jones as a commune, and to take as his second wife a former African-American slave named Rachel (Gugu Mbatha-Raw).

Let’s quickly trace the migration of the Civil War drama in American movies: In D.W. Griffith’s The Birth of a Nation (1915), the Ku Klux Klan were heroes and freed Blacks were menace personified. In Gone with the Wind (1939), Yankee soldiers were larcenous creeps and the main characters remembered slavery days as a wonderful time. In most Hollywood Civil War films from 1940 up through Steven Spielberg’s Lincoln (Samuel Fuller’s Run of the Arrow excepted), the Union army — and Abraham Lincoln’s Republican Party – were seen as reluctant saviors.

The nastiest characters in Free State of Jones wear gray coats but the men in blue are almost as rascally, behind the scenes — the conquering Yankees are talked about but seldom shown. After the war in the period of Reconstruction, the free-thinking followers of Newton Knight the Mississippi Robin Hood are shunned by the victorious Northerners and lynched by their fellow Mississippians. Just another group of crazy non-conformists. At the movies, if it weren’t for the radical corrections of 12 Years a Slave and Free State of Jones — not to mention the complete rethinking involved in Nate Parker’s upcoming “remake” of The Birth of a Nation — it would be hard to see any daylight penetrating the situation at all. A clear case of art imitating life.

McConaughey plays Newton Knight in one key, the key of righteous indignation, just what the story calls for. The lovely English actress Mbatha-Raw (from Belle) projects a wounded dignity as Rachel, Oakland native Mahershala Ali steals every scene he’s in as the escaped slave Moses, and the young, scared character of Newton’s nephew Daniel (played by Jacob Lofland) brings to mind what may be the best of all possible Civil War films, John Huston’s The Red Badge of Courage. Can’t we all just get along? The answer, as far as Free State of Jones is concerned, is frankly, no. But the best of us can never give up the struggle for civil liberties.