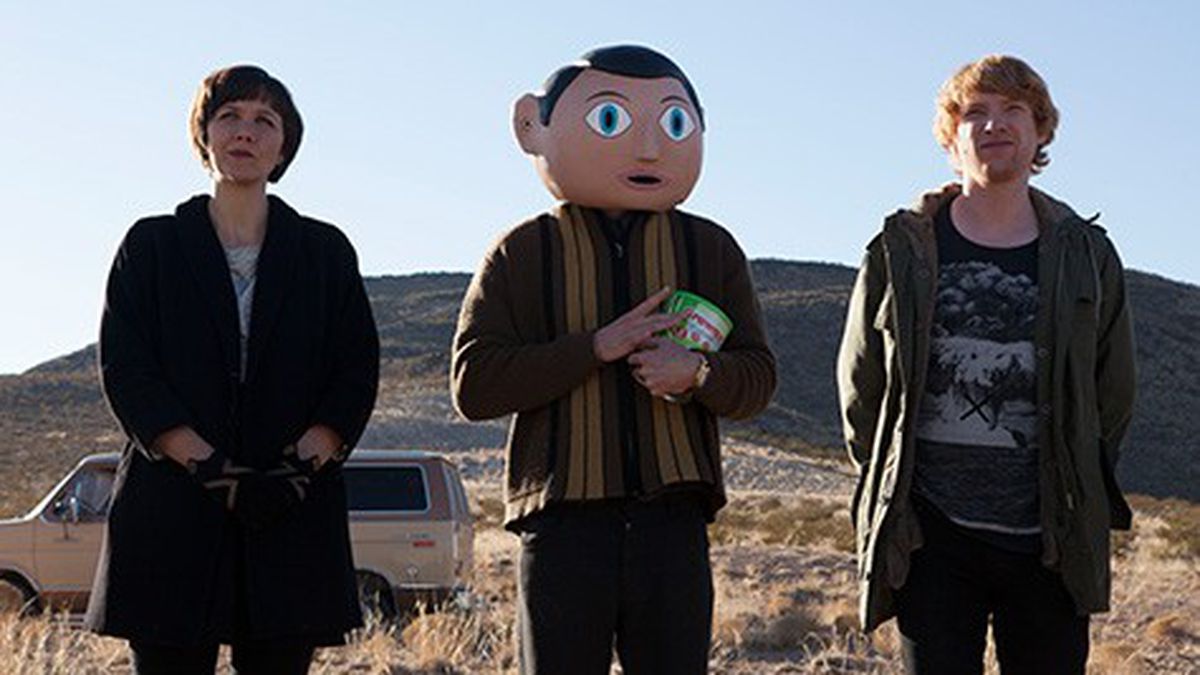 The man in the mask.

Jon Burroughs (Domhnall Gleeson) is a shy, sincere, self-conscious, red-haired young Englishman who works in an office, lives with his parents, and composes dreadful songs. One day he meets a group of like-minded people who travel around in a van and play the most impenetrable, dissonant art rock imaginable, under the leadership of a man named Frank, who wears a large, emoticon-style mask on his head 24 hours a day. Frank and his mates call their band SORONPRFBS (although nobody seems to know how to pronounce it), and Jon runs away with them for a life of rigorous rehearsing followed by bad-paying gigs in obscure venues.

Frank is played by actor Michael Fassbender (12 Years a Slave, A Dangerous Method) and other members of the band are played by Maggie Gyllenhaal and Scoot McNairy. Fassbender lets his hair, and his mask, down in the last reel, but Frank is not much of an actors’ showcase. Rather, it’s a dour, darkly comic observational riff on people who lock themselves up in remote cabins in Ireland for a year of working out their musical visions, then go out and fall flat on their faces.

If we didn’t know anything about it before, we learn a little about the fraternal nature of a certain type of rock band through Jon’s eyes and his voiceover narration. As he settles into the “mentor hospital” cabin, Jon goes through a ritual hazing period. Don (McNairy) reassures him: “I know what it feels like to try to write a song and it comes out shit.” The severe, theremin-playing Clara (Gyllenhaal) is even more dismissive. But enigmatic Frank, who eats his meals through a straw and has the ability to add just the right instrumental touch to SORONPRFBS’ tortured tunes, likes the new kid and nurtures him. Their travels eventually take them to SXSW in Austin and a tract home in Bluff City, Kansas.

Irish director Lenny Abrahamson and writers Jon Ronson and Peter Straughan reportedly based the character of Frank on the late musician/comedian Chris Sievey, who performed under the name Frank Sidebottom wearing a similar full-head mask, playing the sort of hard-to-grasp ditties beloved by cult audiences. So Frank is a tribute to a way of life as much as to an individual. All the actors seem to understand this and their performances reflect it. The film pretty much dares us to relate to it. It may be a bit hard to swallow, but stay with it and let it work. It’s a nostalgia piece in which artists we might initially find pretentious and annoying are suddenly transformed into quaint, comforting reminders of a different time and place when musical expression was not yet completely homogenized. That time is now, and the place is here.