.Fitness for Your Brain

An upcoming event series called "Heavy Breathing" will merge critical theory seminars with wacky fitness classes in an effort to engage both body and mind. 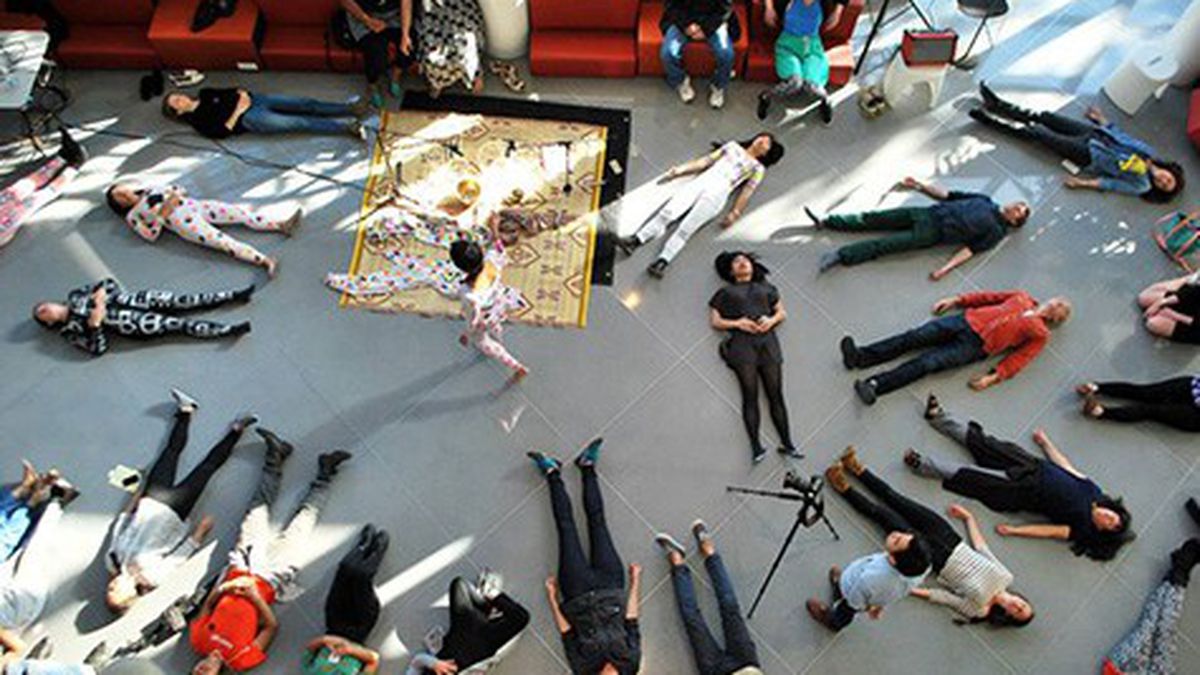 Last Thursday afternoon, a group of people stood in the lobby of the Yerba Buena Center for the Arts in San Francisco, throwing their arms into the air and then abruptly letting them fall while releasing a loud exhale. The artist Jeepneys, wearing a mic headset and a full body spandex suit painted with rainbow designs, stood in the center of the circle, directing the class to go faster and faster until the entire group was huffing for air.

The event — part interactive performance art, part group exercise — was an appropriate kick-off for Heavy Breathing, a summer series of critical theory seminars in the form of absurd fitness classes led by artists. The gathering also included a session of “laughter yoga” led by artist Raphael Noz and a workout called “Pumped Up for Nothing” in which performance artist Julz Hale Mary taught the crowd irreverent moves, including “blank face” and “pour yourself a drink.” The kick-off sessions were light on the theoretical end, but as the series unfolds throughout the summer, facilitators will use similarly wacky approaches to tackle some challenging bodies of thought.

Bay Area artists Sophia Wang and Lisa Rybovich Crallé began curating Heavy Breathing only three months ago, thanks to grant funding. Wang and Crallé came up with the concept during a walk up a massive San Francisco hill as they were discussing what they were reading. As they climbed, they began losing their breath, but insisted on continuing the conversation. “There’s so much humor in when you’re trying to articulate something and you’re huffing and puffing,” said Crallé in a recent interview. “I feel like things kind of break down and dissolve as your body gets moving and it becomes fun.”

They decided to curate a workshop series in which participants would be exerting themselves both physically and mentally. Through the events, Wang and Crallé hope to explore the potential for “somatic learning” — learning through the entire body — to bring new perspectives to theory that would normally be simply read and discussed. The idea is to engage those theoretical concepts with the entire body to see if they can be understood in a new way through physical metaphor. “I’m interested in what happens if you’re being forced to move and think about global risk management,” said Wang, “or you’re asked to go for a run around the lake and think about systemic oppression of people of color and what it means to feel like you’re being chased.”

Once Wang and Crallé began searching for facilitators, they found that there were a surprisingly high number of local artists making work at the intersection of bodily engagement and critical theory. “I think people are really interested in body learning and the capacities of the body as an art form, which, of course, is not a new thing,” said Wang. “You have that in performance art and durational art and things like that, but it seems like — here in the Bay Area at least — we’re having a lot of consonance and resonance at this juncture.”

Wang is a dancer, and started her dance practice while she was writing her doctoral dissertation, so she’s familiar with the overlap and balance involved when engaging oneself both mentally and physically. But Crallé is a sculptor, and said that she spends most of her time sitting in her studio making work or reading at home. “I think for those of us who don’t have a dance practice or who aren’t active yoga practitioners, or what have you, there is this scary disembodied kind of aspect to contemporary life,” said Crallé. Heavy Breathing will work to activate that embodiment for people who might not usually engage in a conscious physical dialogue with the world around them.

The first seminar will be on June 27 at the Lake Merritt Bandstand in Oakland (666 Bellevue Ave.), and ten more will follow at various locations on both sides of the bay. The last will take place on August 30. All sessions are free.

For a session entitled “Cosmoconvulsive Anxiothenics,” artist Christian Nagler will lecture about global risk management practices and how they relate to the nervous system while engaging in a bounce house session of “Reichian somatics, full-corpus spasms, and galactic tingles” at the Lab in San Francisco (2948 16th St.). And in a session called “Training for Exhaustion (for the Unintelligible),” performance artist Xandra Ibarra will provide training for enduring white supremacy as a person of color while also leading a jog around Lake Merritt.

Other highlights include Olivia Mole’s session in the San Francisco Chinatown YMCA pool (855 Sacramento St.), “Topos: That’s What She Said,” which will involve an underwater audio installation and a lecture on the Aristotelian concept of topos through a feminist lens. And in a session called “The Pleasure Principle,” which will be held at Real Time & Space in Oakland (125 10th St.), the artist collective Bonanza will lecture on artist Emily Roysdon’s essay “Ecstatic Resistance,” which reimagines what political protest looks and feels like, while teaching a series of resistance training exercises.

Aside from imbuing a physical aspect to theoretical study, the series will also infuse mental engagement into physical exertion to rethink what forms exercise can take and what the intentions behind it can be. “[Exercise] often is promoting normative values as far as what a body should look like, what it means to be fit, what it means to be healthy, and who can actually participate in a certain kind of leisure-related fitness activity that assumes that you’re not moving your body in manual labor as your work,” said Wang. “So I like the fact that we have this series of classes where you’re being asked to move in ways that aren’t just an aerobics class or yoga for fancy people.”

The full schedule of classes can be found online at Facebook.com/HeavyHeavyBreathing.