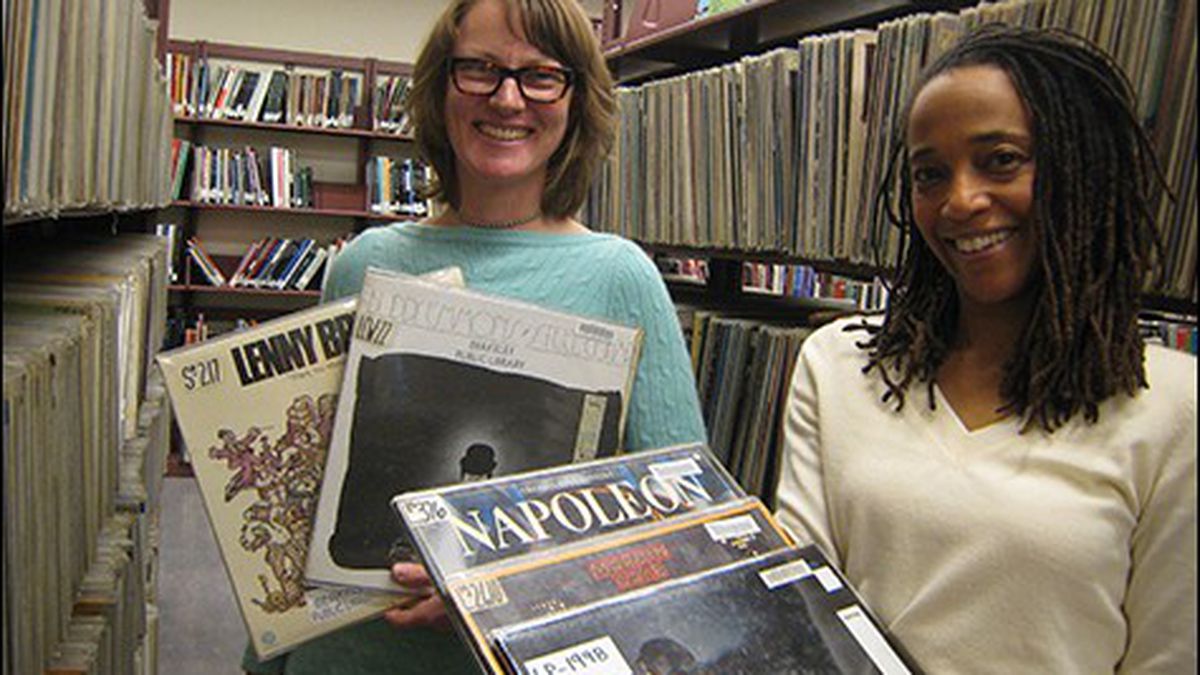 Finding the Funk in the Library

Librarians at the Berkeley Public Library show off their music collection by throwing a monthly dance party.

Over the course of a cold Tuesday evening in December, a group of thirty people transformed the beige, fluorescent-lit community room of the downtown Berkeley Public Library into something that more resembled Soul Train. The music got loud. People started dancing. The DJ — Rickey Vincent of KPFA, who is also a UC Berkeley professor and funk scholar — growled along to the Ohio Players, dipped into funk’s many subgenres, and taught the crowd about the history of funk in between songs.

“That sort of heavy stuff?” he said over a song by go-go innovators Trouble Funk. “People want that heavy funk.”

The event was the second in the Berkeley Public Library’s “Mining the Library” program — a three-part series that enlists popular local radio DJs to dig through the library’s music collection and play a set of songs around a theme. Arts and music librarian Michele McKenzie developed the series when she realized the main way she discovers new music — through local radio DJs — could also help showcase the library’s collection. Wanting to demonstrate that there was more to the library’s collection than just classical music, she reached out to some of her favorite DJs specializing in other genres.

For Vincent, one of the biggest advantages of the library’s collection is the access to rare, out-of-print, and expensive box sets — like the one that included an alternate take of the Isley Brothers’ “Take Me to the Next Phase,” which played during his set. “For most of us collectors, we’d like to have an alternate seven-minute take of our favorite song, but we don’t have the resources to get all of these artists’ fifty-, sixty-dollar compilations,” he said. “That was the most exciting part of their CD collection. There’s stuff that I had long since given up on — unreleased tracks and rarities — that are in some of these box sets.”

The librarians also wanted to highlight their vinyl collection — 6,000 carefully preserved records (a larger number of LPs than both the San Francisco and Oakland public library systems offer) dating from the 1960s to early ’90s — housed in a back room on the fifth floor of the downtown branch.

“[The collection] was a revelation,” said KALW DJ Dore Stein, who DJed a set of world-jazz and cross-cultural music hybrids library in November. “This is a resource that people really should take advantage of. Most of what I play is not mainstream. I was very impressed they had virtually all of [the music] I picked. The few things that they didn’t have, Michele immediately ordered.”

While the Berkeley library has been dedicated to embracing new music technologies — it was the first library in the Bay Area to start buying CDs in the 1970s and now boasts an impressive streaming music service — its desire to always be on the forefront of new technology has thrown the future of the vinyl collection into question. Although vinyl has surged in popularity in recent years, it’s still viewed by many as a dead format, and some at the library don’t see value in maintaining the collection.

“Libraries want to be the cutting edge, and there is a perception that analog is not hip,” said McKenzie. “We’re often told that we are not an archive.”

It’s the same debate the library had a few years ago about cassette tapes, said art and music librarian Dayna Holz, who helped organize the series. “How many different formats does the library collect and maintain? Since we have not added to the vinyl collection in over twenty years, it’s not fresh and it’s not perceived as something that could be active.”

Because the library’s budget allocation is determined by how often certain materials are checked out, the librarians, vinyl fans themselves, have to constantly prove that patrons are interested in the collection. They’re hoping to drum up enough interest to eventually expand it (the library stopped buying records in the early Nineties) and want to get a record player for the library.

“Young people who are discovering vinyl — who want to try out the format can do that here, without making a massive investment,” said McKenzie. “We’re looking for support, because if the vinyl collection is going to stay here, it has to come from the patrons. If people want it, they’re going to have to fight for it.”

The series ends on January 12 with an hour of ’50s- and ’60s-era lounge and exotica chosen by KALX’s Erin Prunchak (also known as Rubberband Girl). Prunchak described her upcoming set as “mid-century bachelorette pad” and, accordingly, mocktails will be served.

At Vincent’s event, people kept dancing even as he transitioned from the familiar (Aretha Franklin’s “Respect”) to the obscure (A track by the Black Panthers band, off the compilation Listen, Whitey!). The librarians joined in, as did the security guard on duty.

“Do you feel that?” Vincent said, over a Parliament song. “The first note spanks the beat. This tension between wildness and structure, that’s why funk never gets old, never gets stale. You can find that funk right here in the library.”

Your Daily Lick: The Slow Poisoner

You’ve Got Stories, They’ve Got a Recorder