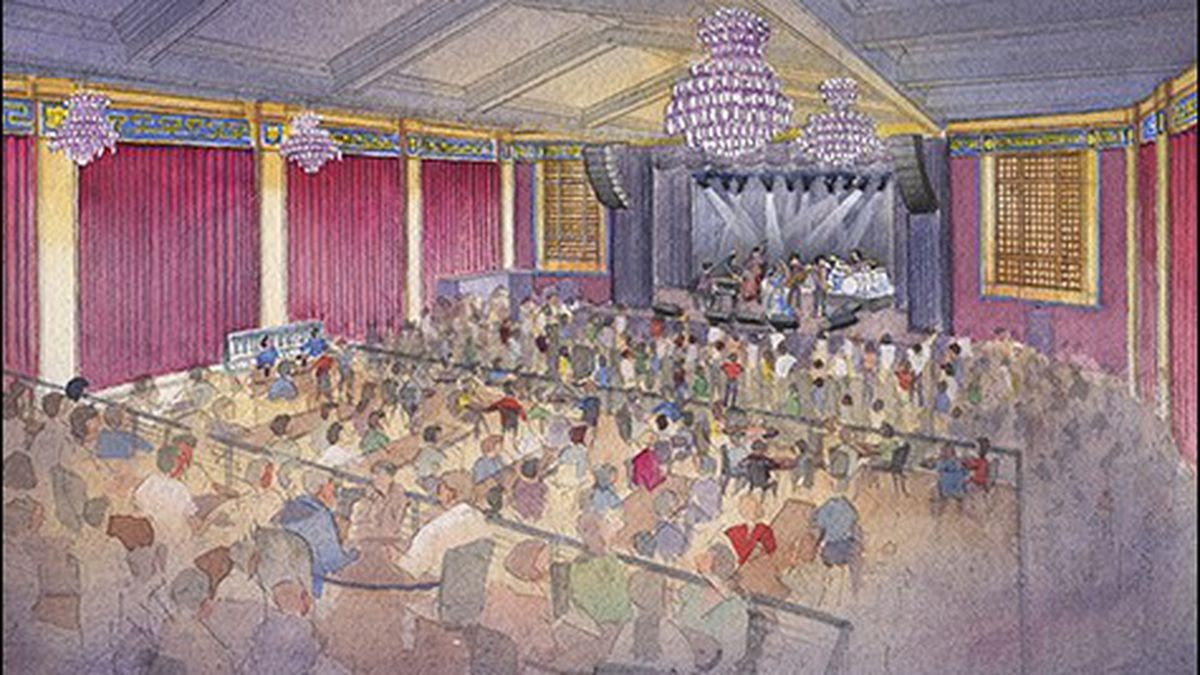 Two new East Bay music venues made significant progress in recent weeks. The operator of The UC Theatre in Berkeley unveiled his plans to rechristen the historic movie house a music venue, which he aims to open next year, while the owners of Leo’s in Oakland finally got the go-ahead from the city’s planning commission, and are shooting for a late-June, early-July opening. Both venue operators are hoping to fill voids in the local music scene and strengthen the case that the East Bay plays a vital role in the Bay Area’s cultural landscape.

Leo’s, located at 5447 Telegraph Avenue in the space formerly occupied by Leo’s Pro Audio, is owned by the Parish Entertainment Group, which also operates The New Parish and The Rock Steady in Oakland and Brick and Mortar Music Hall in San Francisco. The 6,000-square-foot building will include a 2,500-square-foot music venue that will operate at night, as well as a twenty-seat restaurant and a clothing store that will both be open during the day. At a city planning commission meeting last month, co-owner Michael O’Connor made his case for Oakland’s need for a venue of this size, saying it will fill the void in the city for places that can nurture up-and-coming bands. “It helps grow small artists,” he said. “When they prove they can fill Leo’s, then they can play The New Parish.” He added that Leo’s will also help lure more touring acts to Oakland. “We’re constantly, constantly trying to make the argument that top-flight up-and-coming music should stop and play in Oakland and not just San Francisco. We will definitely be able to book really good national and international talent at Leo’s.”

In an interview, co-owner Jason Perkins added that while he and O’Connor used to have to convince booking agents that their bands should play in Oakland, now “we have agents knocking on our door every day saying, ‘Our bands want to play Oakland.’ That’s a big difference from two years ago.”

Neighborhood boosters also have high hopes for Leo’s. Darlene Rios Drapkin, executive director of the Temescal Telegraph Business Improvement District, said the venue will add more “eyes and ears” to that part of Telegraph Avenue and turn it into a “day and nighttime district.” She echoed sentiments expressed by supporters of Leo’s that it not only will provide a sorely needed music venue in Temescal but also promises to be part of the overall trajectory of establishing Oakland as an arts destination. She added that O’Conner and Perkins have also committed to sponsoring a stage at this year’s Temescal Street Fair, which will be held in July. “It’s a win all the way around. We’re excited to welcome them into the neighborhood.”

Meanwhile, over in Berkeley, the former chief operating officer of Bill Graham Presents, David Mayeri, announced his plans to turn the historic UC Theatre into a Fillmore-size venue that will open next year. Originally conceived as a for-profit operation whose investors included Warren Hellman, the billionaire venture capitalist and founder of the Hardly Strictly Bluegrass music festival, the 1,460-capacity venue was reconfigured as a nonprofit after Hellman’s death in 2011. Now, Mayeri, who is board president of the nonprofit (called the Berkeley Music Group), envisions the programming being more diverse than just that of a music venue — although that will still be the core of the operation. In addition to featuring a range of genres, such as bluegrass, rock, EDM, Latin, jazz, R&B, and more, the venue’s estimated 75 to 100 shows per year will also include comedians, film screenings (including at least one showing, possibly more, of The Rocky Horror Picture Show, which ran at the UC Theatre for 23 years), and a speaker series. There will also be a major education component to the nonprofit, which will focus on training youth in concert promotion, as well as a nonprofit fundraising model — i.e., helping nonprofits raise money in the space. Partners in the education component so far include Berkeley Youth Alternatives, Youth UpRising in Oakland, and the YMCA Teen Center in Berkeley.

Mayeri, who used to run all of Bill Graham Presents’ venues in the western United States, said The UC Theatre will play a crucial role in the local music scene. “There is no venue of this size and type in the East Bay — it does not exist,” he said, noting that nearby Freight & Salvage has a capacity of four hundred, while The Fox Theater in Oakland is double the UC’s size. Its closest analog is the fully seated Zellerbach Hall, whose programming he said won’t overlap with the UC’s. “So we’re allowing bands that have graduated from the Slim’s, the Great American Music Hall, the Independent level in San Francisco to have a [place to] play in the East Bay that they don’t have right now.”

When asked whether he sees The UC Theatre taking shows away from The Fillmore — which Mayeri used to run and which he called “one of my most favorite venues in the world” — or whether he thought bands would play both venues, he hinted at the latter, saying, “What we’ll do is bring the opportunity for more shows and more bands.”

Whether Mayeri will be able to accomplish that goal may depend on whom he hires to book the venue. Although Dawn Holliday of Slim’s and Great American Music Hall (and Hardly Strictly Bluegrass) was initially going to help with the programming, it’s now unclear if she or her team will be play a role. Mayeri wouldn’t reveal any details, saying only “We will hire an independent contractor to program not all but some of our shows. We have made no announcements. Right now we’re focused on fundraising.”

Regardless, Berkeley officials see The UC Theatre playing a crucial role in downtown. Michael Caplan of the city’s Office of Economic Development, who introduced Mayeri to the building’s owners, said The UC Theatre is “a very interesting addition to the cultural landscape of downtown.” Besides its historical significance, the nearly one-hundred-year-old theater has a prominent marquee (which was recently renovated) that serves as a gateway to the arts district. “It’s important as a welcoming element,” he said.

Caplan added that the venue will provide a much-needed nighttime entertainment option — especially for young people — in Berkeley. While the city used to have The Keystone, Berkeley Square, and Blakes on Telegraph, recent years have brought a noticeable dearth of rock music venues. “We have a shortage of places to dance or see live music,” he said. “It will be a huge benefit to that age group. That age group will come into downtown — it becomes a major attractor for a demographic that’s probably underserved in the whole area.”

The UC Theatre could help “activate the whole district,” much as The Fox Theater has done for Uptown Oakland, Caplan continued. “People want to be where people are doing other fun stuff. You absorb that energy by osmosis.”

Berkeley Music Group needs to raise a total of $5.2 million to begin renovation of the theater, which will include installing lights and a sound system by Berkeley’s Meyer Sound Laboratories, and removing the theater seats (the floor plan will be flexible, with optional cabaret-style tables and chairs), among other upgrades. Mayeri said they’re more than halfway toward their goal, and just received an anonymous $250,000 challenge grant. Construction will begin this summer. “There’s an enormous amount of interest,” he said. “It’s very exciting to see that.”

For more information, go to TheUCTheatre.org.