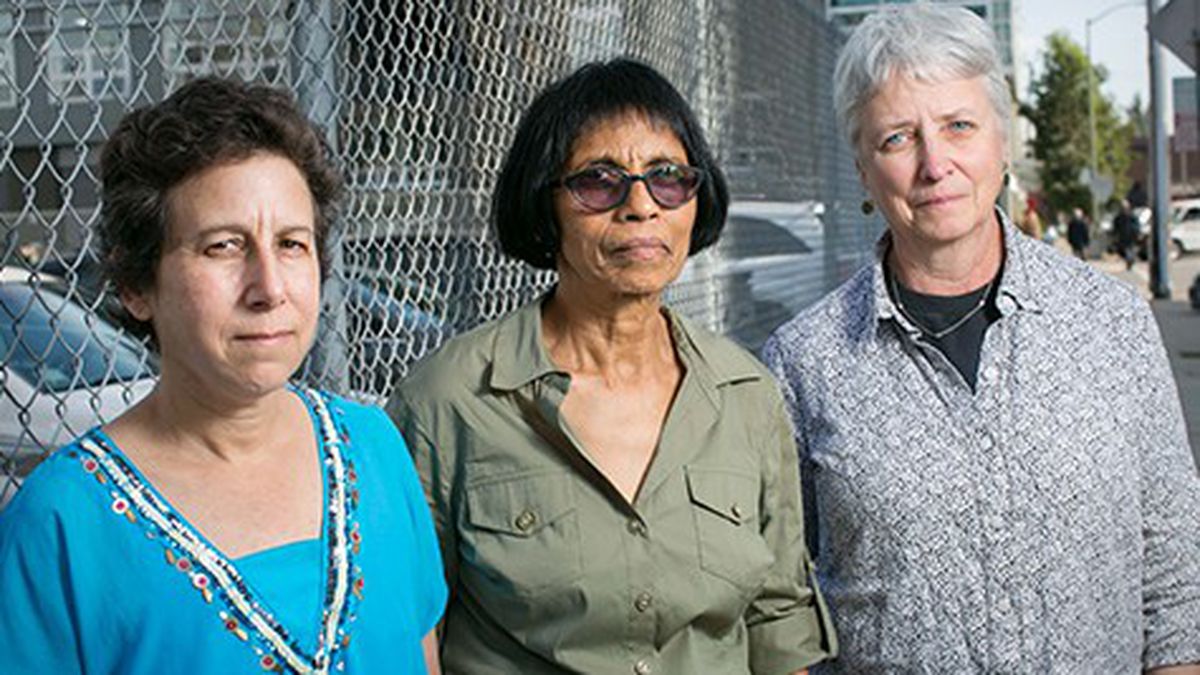 When longtime Laney College instructor Cynthia Mahabir returned from summer vacation last year, she was shocked to find out that her supervisors had cancelled her classes for the fall semester. Her dean, she learned, had sent a letter to the union that represents faculty stating that the college had revoked her position “based on our desire to assign classes to instructors who best fit the wide range of learning needs reflected in our student body.”

Mahabir — a seventeen-year Laney veteran who had received an “exemplary” ranking in her most recent evaluation — was especially upset to learn that administrators had ordered her to return her keys to the college and had even revoked her access to the school’s email system. “I was absolutely totally stunned,” said Mahabir, who teaches sociology. “What was really most painful was being described as not the ‘best fit.'”

She said it was immediately clear that the college was punishing her for her advocacy efforts. Despite her long career at the Oakland community college, Mahabir is classified as a part-time instructor, and in recent years has become particularly outspoken about the need for job protections for non-tenured faculty. In the months before the administration revoked her class assignments, she had publicly criticized Laney’s president, Elñora Tena Webb, for failing to honor part-time faculty at an annual event and had been involved in a number of other protests against Webb.

Mahabir got her job back this semester, but the fight, she said, is far from over. Part-time faculty across the Peralta Community College District — which includes Laney and Merritt colleges in Oakland, Berkeley City College, and College of Alameda — are pushing for major reforms in how the district treats non-tenured instructors. Part-time teachers greatly outnumber tenured faculty at all four colleges yet they have very limited rights and almost no job security.

The Peralta Federation of Teachers (PFT) — the union that represents both part-time and full-time faculty — filed a grievance last year on behalf of Mahabir and Matthew Hubbard, another longtime non-tenured Laney instructor who lost his fall class assignments in the summer. The grievance alleged that the district’s last-minute class cancellations were not justified and violated contract rules — and in Mahabir’s case constituted retaliation.

As part of a joint settlement agreement in that dispute, the Peralta administration and the union are currently negotiating to clarify the existing rights of part-time faculty to maintain class assignments from one semester to the next, according to Matthew Goldstein, PFT president. At the same time, the union is preparing to bargain for a new three-year contract before the current agreement expires in June. Through that process, part-time faculty members hope to substantially expand their rights and benefits to bring more equity between part-time and full-time instructors.

This push comes as non-tenured professors at private nonprofit colleges across the Bay Area have recently taken the unprecedented step of unionizing in an effort to improve their working conditions (see “The Battle for Adjunct Faculty Rights,” 7/22/14). Last week, activists on campuses across the country participated in National Adjunct Walkout Day in an effort to raise awareness about the plight of non-tenured professors.

While Peralta part-timers have long had union representation, their fight for stronger protections is critical now, advocates say, given the renewed attention on community colleges at the national level. In his State of the Union address in January, President Barack Obama touted the affordability of community college and called for an expansion of tuition-free colleges, saying he would like to see two years of college become “as free and universal in America as high school is today.”

But absent from this discussion, advocates have argued, is the role of the community college instructors who are already dramatically underpaid. Across Peralta, roughly 70 percent of all faculty members are classified as part-time. At Laney last semester, 359 out of 484 faculty members, or 74 percent, were part-time, according to Mahabir, who has been the PFT rep for all part-time Peralta faculty since 2005. Part-time instructors cannot teach more than roughly ten hours of classes per week, which is generally a maximum of three courses (and is two-thirds of a full-time faculty course load).

Part-time faculty members only get paid for one office hour per week — and that’s only if they have two or more courses. Many part-timers don’t even have their own office spaces on campus, according to the union. Full-time instructors receive five paid office hours per week. And while full-time faculty members have traditional tenure contracts, part-timers have little certainty about future class assignments.

Given this job instability, part-time instructors at Peralta — many for whom this is their primary source of income — face a constant struggle, said Alayne Cramer, a part-time English as a Second Language instructor at Laney College. “The stresses are so enormous that they eat up your energy and they eat away at you semester after semester.” Cramer, who has been working at Peralta for more than sixteen years, said some instructors can barely make ends meet and don’t have the time to advocate for better working conditions. “You’re just surviving a lot of the time.”

As a union rep, Mahabir helped negotiate a policy in 2005 that stated that part-time instructors who have worked six out of ten consecutive semesters and have received above-average evaluations are entitled to a minimum number of course assignments. But even with that protection, there are no guarantees for future classes, because part-timers can still lose their assignments due to budget or enrollment declines. Full-time instructors get priority in their course selections.

According to the union, Laney officials violated that 2005 policy when they revoked the course assignments of Mahabir and Hubbard last summer. Both faculty members are longtime instructors with strong evaluations, yet the college denied them courses due to vague claims of them not being the “best fit” for their positions.

“I’m not a good fit for the Laney community? I had been an okay fit for eleven years,” said Hubbard, a mathematics instructor who also has a non-tenured position at Mills College. He added: “Being a part-timer, you’re really living from semester to semester.”

Peralta ultimately agreed to pay back wages to both instructors who returned to teaching in January, according to Mahabir. But even if the settlement forces the administration to honor part-time teachers’ existing rights, instructors said they felt Peralta still has a long way to go to achieve meaningful job security.

“When two groups of faculty have virtually identical CVs and years of teaching experience, but one comes back in the fall and the other doesn’t, questions are certainly raised about fairness,” said Goldstein, the union president. He noted that there are ongoing concerns about the potential for retaliation against non-tenured faculty who are advocating for change. “Their part-time status doesn’t cost them their First Amendment rights.”

As part of broader contract negotiations, Mahabir said she plans to advocate for seniority rights for part-time faculty so that longtime instructors would have more job security and benefits. She said she also wants to make it easier for part-time faculty to access summer classes since currently they only get courses after full-time faculty members select their choices.

In terms of possible job security reforms, Mahabir said there are other public college systems in which part-time faculty sign two-year or three-year contracts and face evaluations in the process. Under that model, instructors have more job stability and colleges are more successful at recruiting and retaining talented faculty. “The continuation of your employment is guaranteed, but you have to be evaluated again,” she explained.

Mahabir and part-time faculty organizers across the state have also advocated for legislation that would establish a so-called “equal pay for equal work” system for community colleges, meaning part-time and full-time instructors would receive equivalent wages for the same course loads. These kinds of reforms ultimately benefit students, she added: “There’s a real symbiotic relationship between equity for faculty and the success of students.”

The district’s treatment of Mahabir sparked outrage among part-time and full-time instructors alike, said Sonja Franeta, a longtime tenured ESL instructor at Laney College. “These are people who are devoted to the institution and they literally have hardly any rights,” she said.

Cramer added that when she learned Mahabir had lost her position, “It was really like being kicked in the gut.”

Jeffrey Heyman, Peralta spokesperson, declined to comment on the specific Laney cases or ongoing negotiations, but said that “part-time faculty play a very, very important role here in Peralta. They teach a lot of classes and we really value their expertise and what they bring to our students.”