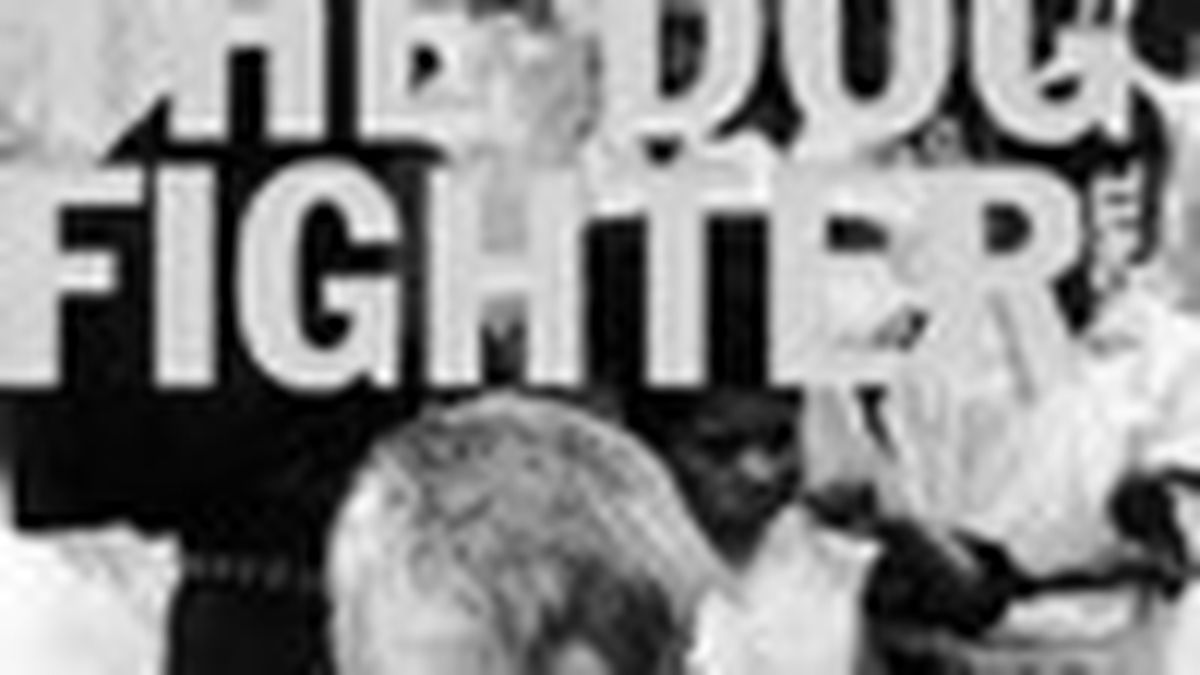 Hot new books for your delectation.

The titular dog fighting in this debut novel by a UC Berkeley grad is a good job if you’re strong, poor, and willing to battle hounds to the rib-stomping death, armed only with a Freddy Krueger-style glove. The novel’s unnamed narrator is all of the above. But the fight scenes, as frothy with blood and spittle as they may be, are only a gruesome side note in this manly man’s coming-of-age tale set in 1940s Mexico. The novel wanders, plotwise, almost as much as its itinerant narrator does. After arriving in the hidden town of Canción, the young man becomes embroiled in a class-and-culture clash as rebel forces battle the local crime boss, who is intent on turning Canción into an American tourist haven. The narrator soon falls in love with the local crime boss’ mistress, adding more testosteroney angst to the mix. Stream-of-consciousness weirdness dominates the text as the narrator crushes dogs with his giant ham-hands, reflects on God and homosexuality, and refuses to use apostrophes. Hes not so fond. Of complete sentences. Either. Though Bojanowski’s agenda-heavy revisionist history doesn’t always feel period-authentic, he has a gift for detail and a relentless dedication to his imaginative world. It’s Hemingway for hipsters. Though he hits you over the head with the damn seriousness of his story, and the ending falls short of satisfying, Bojanowski’s bloody menace and touching moments keep you reading. — Nicole Ankowski

Diary of a Viagra Fiend
By Jayson Gallaway
Atria Books, $22

This journal of carnality, consumption, and condescension aroused laughter — once. On page 241. Recounting his high times as a San Francisco bondage-club dancer, porn reviewer, crushed-Viagra inhaler, and blitzed subject of a 20/20 interview, Gallaway writes as if he’s being paid per cultural reference and makes like a coked-up Ray Ratto, unnecessarily tossing SAT-prep words such as “pulchritudinous” and “erumpent” into the mix. Narcissistic recollections of all the legal and illegal drugs in which he has overindulged and all the hot, trashy women he has banged alternate with repeated, melodramatic attempts to stick it to The Man via pompous, expletive-heavy tirades. These grow wearisome rapidly, and are the literary equivalent of being trapped in a telephone booth with Jim Carrey. The most painful thing about this book — and that’s saying something — is that, somewhere in there, this could have been a good story. What led an obviously clever, well-read man with an advanced degree to live like this? Why is Gallaway so willing to spill gallons of ink describing his penis in various states of engorgement, but so little explaining his mind? More introversion would also have been good, because Gallaway’s dialogue reads like X-rated sitcom chatter. Hey, maybe if your organ was rapidly turning gangrenous from a misapplied cock ring, you too would have the presence of mind to tell your doctor, “[I will] denounce you before God and the entire world as a charlatan, a quack, and an unfeeling, inhumane bastard who sat around eating fondue and pork tartare with his fly-fishing buddies while one of his patients’ cocks was turning into a retiree named Ordell before falling off.” — Joe Eskenazi

The Good Cripple
By Rodrigo Rey Rosa
Translated from the Spanish by Esther Allen
New Directions, $13.95

It’s only 116 pages long, but the latest novella from preeminent Guatemalan author Rodrigo Rey Rosa is hefty stuff. Former kidnapping victim Juan Luis Luna, now a writer living in Morocco, chances upon one of his former captors, who has become a restaurant owner. Thoroughly unnerved by the meeting, Luna moves back to Guatemala, where he runs into another one. Not surprisingly, Luna still has some questions about the incident (during which one of his feet was amputated), especially since he’d believed all this time that the kidnappers had all died during a botched getaway. Unexpectedly presented with the chance to get even, Luna lives up to the book’s title — and in so doing reminds us of what they say about living well being the best … well, you get the picture. Though Rey Rosa’s writing is spare and powerful, the book’s circular structure is unnecessarily confusing. Readers might find it wise to look back over Part I, which comes last chronologically. Note: Although the author, like the protagonist, is a friend of Paul Bowles who has lived in both Guatemala City and Tangiers, The Good Cripple is indeed a work of fiction. Against the ordered violence of late-20th-century Central America — and, for that matter, of post-9/11 America — an eye for an eye is more likely than a turned cheek. — Nora Sohnen

Writing About Your Life
By William Zinsser
Marlowe & Co., $23.95

Zinsser has spent much of his life writing about other people’s lives. After serving in World War II, the Princeton grad began his career as the New York Herald Tribune drama editor and went on to profile the famous and the ordinary as a freelancer for Look, Life, and the Saturday Evening Post. Zinsser has also spent much of his life — including an eight-year stint at Yale — teaching students how to write, as well as investigating his own craft in such books as On Writing Well and Writing to Learn. It therefore stands to reason that this latest effort — part memoir, part instructional manual on writing memoirs — should incorporate his passion for imparting knowledge with passages from his own creations to illustrate pertinent points. Unfortunately, for all Zinsser’s professorial prowess, most of his instructions come across as preachy platitudes rather than providing fresh ideas for wannabe scribes. He even confesses to doing so, but defends it by saying, “This book is sprinkled with maxims that are clichés of positive thinking. But they have worked for me, and you can make them work for you.” Zinsser’s readers deserve better. He has proven this by peppering the book the book with previously published articles that offer glimpses of his true depths. — Vicki Cameron

The joy of Todd Taylor’s collected writings from the punk rock fanzines Flipside and Razorcake is that he doesn’t waste a single page trying to prove his punk credentials or develop an all-encompassing theory of the punk DIY aesthetic’s role in our culture. Taylor is happy just to be on the scene, and that makes him a capable interviewer who asks questions rather than leading statements meant to show off what he knows. The result is a collection by turns incoherent, silly, thoughtful, and insightful. The inclusion of artists such as Winston Smith and Mike Diana evince Taylor’s expansive view of punk culture, but his tent is not big enough to include punk poseurs such as Incubus who have been embraced by the mainstream. Most of Taylor’s subjects rue the current state of punk, weeping a little for the days before it went top 40. Smith says, “I never thought punk could be co-opted. … It’s so tawdry and off-putting and so repellent that I was always thinking, ‘Great, this is something that won’t be that flower-power, hippie-dippy love bead shit.'” But as the Nick Hornby of the punk scene, Taylor believes in the beauty of today, his role as the guardian of tradition be damned. “Fuck ‘back in the day,'” he writes. “To be sure, there were fantastic bands in the past — arguably the best bands that ever were — but if we don’t challenge that, if we don’t even try to come up with something new or relevant or our own, what’s the point?” — Matt King

Natasha and Other Stories
By David Bezmozgis
Farrar, Straus & Giroux, $18

“Nothing was repeated until everything was attempted. That way, in the event that I was struck by a bus, I would feel as though I had lived a full life,” muses narrator Mark Berman, recalling a steamy summer adolescent fling with his cousin in the title piece of this satisfying, often absorbing debut short-story collection. It’s typical of Bezmozgis’ incisive, economic prose, balancing matter-of-fact depictions of incidents that many might find shocking with a germ of gallows humor. Having immigrated from Latvia to Toronto with his parents in the early ’80s, Mark recounts growing from an English-challenged first grader into an acclimatized young adult via rough passage through behavioral problems and experimentation with drugs and sex. The command of English in this volume is masterful, but Bezmozgis’ own immigrant experience — it matches Mark’s — effects a sense of outsiderdom, of being assimilated but never feeling wholly a part of the New World. That in-between-ness gives these stories a compelling tension as they reveal a seedier side of Russian Jewish life: the nervous breakdowns of parents barely able to function in a new environment; young Mark’s negligence leading to the near-death of a dog that serves as a fellow expatriate’s primary hold on sanity; the Hebrew-school bullying that leads to a Jew-on-Jew slugfest during a Holocaust memorial; even anti-gay slander at a B’nai B’rith-owned old folks’ home. It’s “Natasha,” however, that is the book’s tour de force, blurring the lines between the corrupting influence of the Promised Land and the corruption inherent in the immigrants themselves. — Richie Unterberger

Even stray cats and pigeons are on the down-and-out in this latest novel by San Franciscan Plate. Early one morning, a Brinks armored van collides with a car on Market Street and topples over, spilling bags of cash onto the street. Onlookers make off with the money, among them a septuagenarian named Mama Celeste, who then heads home to the decrepit Allen residence hotel to ponder what she should do with her loot. For the next twenty hours or so the novel follows her movements and those of several others who are connected in one way or another to the hotel: Jeeter Roche, the book-loving, drug-dealing building manager; Chiclet Dupont, his garish, perpetually tweaked wife; Stiv Wilkins, a directionless quondam rock musician prone to historical hallucinations who shares his room with his nineteen-year-old wife, Sharona, and their not-yet-officially-named baby; and Richard Rood, a sadistic, red-patent-leather-suited ex-drag queen. There’s no question that Plate has a sensitive, masterful command of language. His writing is simultaneously direct and lyrical, and he has more unique action verbs at his disposal than you could shake a stick at. However, his creativity can get a little overzealous, as several of his characters have a tendency to toss out awkward fifty-cent words. Regardless of whether they are used in a humorous vein, these words are frequently jarring, and their ubiquity ultimately contributes to the muddling of characters’ individual voices. — Kim Hedges