They contend that the "modernization" of the Richmond refinery could worsen air pollution, safety risks, and greenhouse gas emissions. 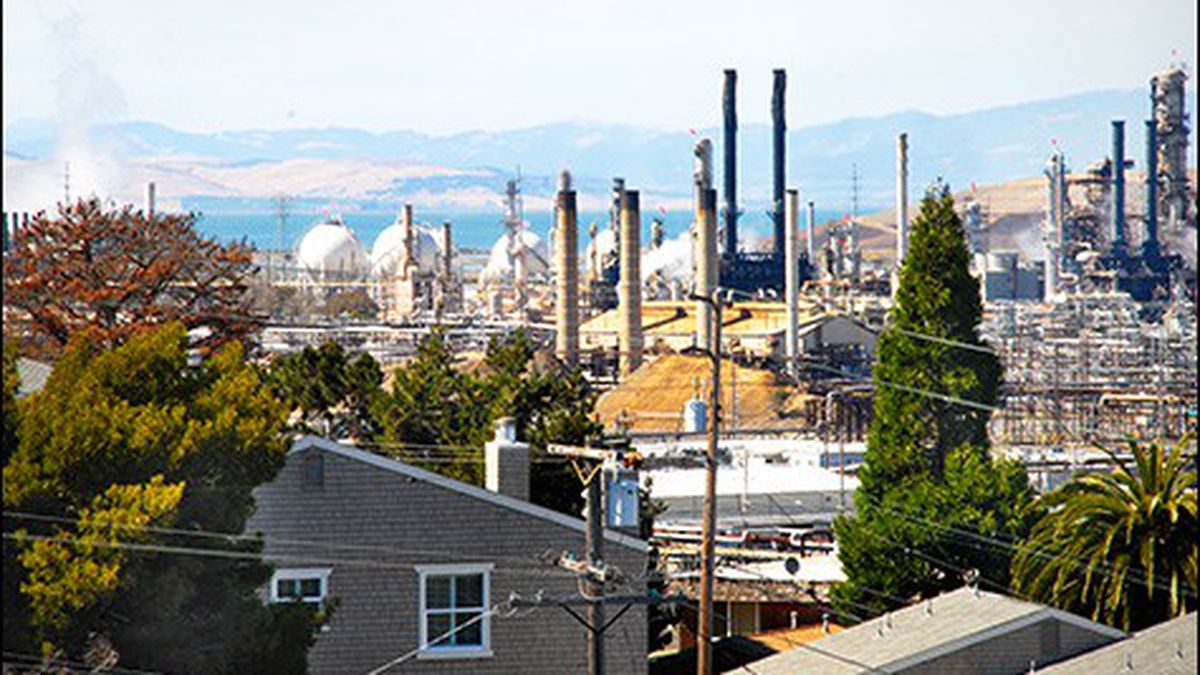 The battle over the Richmond Chevron refinery’s proposed “modernization project” is coming to a head this month, with environmentalists and community activists pushing to make the proposal more eco-friendly, as the oil giant is attempts to win over residents with a slick and expensive marketing campaign. “This is the biggest fight over a refinery project I’ve ever seen,” said Greg Karras, senior scientist at the environmental organization Communities for a Better Environment (CBE).

Chevron contends that the project will lead to a “safer, cleaner refinery.” But the Richmond Environmental Justice Coalition, an alliance of community groups and environmental organizations, fears the project could produce just the opposite: increased pollution, safety risks, and greenhouse gas emissions.

Both sides are going all-out to rally community support. “Chevron has been spending [lots of money] to put up billboards and [is] sending at least thirty people door to door, getting residents to sign a statement saying ‘we want modernization,'” said Richmond mayoral candidate Mike Parker. His organization, the Richmond Progressive Alliance, and other members of the Environmental Justice Coalition have also been talking to residents, handing out flyers, and holding community meetings to share information about the project and voice their concerns.

The battle is expected to come to a head in a meeting of the Richmond Planning Commission on July 9, then at a city council meeting on July 22.

In its official statements, Chevron has said that the proposed project would increase energy efficiency and replace some of the plant’s oldest equipment “with newer, cleaner, and inherently safer systems and equipment.” The project also calls for replacement and expansion of the refinery’s hydrogen production unit and allow Chevron to refine higher-sulfur crude oil and “gas oil” (a petroleum product also used as raw material). Chevron’s plans for the project also include a commitment to “no net increases in the emission of air pollutants, health risks, or greenhouse gases.”

But the prospect of Chevron refining higher-sulfur crude oil scares many Richmond residents, 15,000 of whom sought medical treatment after the August 2012 fire and explosion at the refinery, which was caused by a leak in a pipe that had been corroded by sulfur. The city’s environmental impact report (EIR) shows that refining higher-sulfur raw materials will also increase air pollution in a community that’s already among the most polluted in California — and that producing more hydrogen will increase greenhouse gas emissions. “This is both a climate fight and an environmental justice fight,” said Nile Malloy, CBE program director, at a community meeting on June 19.

Chevron plans to deal with the risk of accidents by replacing equipment in one area of the plant and monitoring for safety problems in the rest. It plans to achieve its goal of creating no net increase in air pollution and greenhouse gas emissions partly through “mitigation” measures that are designed to reduce these problems and partly through the use of credits to “offset” remaining emissions.

But critics charge that none of these measures would actually cut the risk of health, safety, and climate problems from increasing. “A whole lot of toxic air contaminants are increasing as a result of this project even while they’re claiming the project will make it cleaner,” said Parker at the June 19 meeting.

Several speakers at the meeting said that Chevron’s goal of holding pollution to 2010 levels isn’t good enough. “We should be decreasing the pollution that’s already happening,” said Sylvia Gray-White, a CBE member who said she lost her job because she has had so many respiratory problems. Karras said Chevron already emits more unhealthy air pollution than its permits allow. “The 2010 baseline is a product of a negligent, badly run refinery,” said Andres Soto, CBE’s Richmond organizer, at an earlier meeting. “Why do we want to be bound by that baseline?”

At the June 19 meeting, Karras explained one of CBE’s big complaints about the project: that Chevron plans to replace deteriorated old equipment only in the crude unit, which is just one of many parts of the refinery in which old, worn-out equipment is at risk of corrosion from higher-sulfur raw materials, making the equipment a “ticking time bomb.” Outside the crude unit, the plan calls only for monitoring to identify hazards. That’s too risky, Karras said. “There’s no way that monitoring a decrepit piece of equipment is as safe as replacing it.”

Thirty-year Richmond resident Thongsoun Phuthama, a member of the Asian Pacific Environmental Network, said in Lao through a translator that in his experience, “Chevron is very clever. And they’re cheaters. They will do anything to get their way. We’re not going to trust them.”

Parker said many Richmond residents share that distrust. On the other hand, he said, Chevron’s publicity campaign — and the company’s promises of “community benefits,” including more resources for schools, parks, and roads, if the project is approved — have persuaded many people to back the proposal. The Richmond Standard, a Chevron-sponsored website, claims that 70 percent of Richmond residents said in a recent poll that they favor “modernization.”

Countering Chevron’s campaign with a low-budget, people-to-people approach is a challenge. “We have to explain the project to a lot of people very quickly,” Parker said. Many critics complain that the EIR is being rushed through without enough time for evaluation and community education.

Phuthama noted that besides the Chevron project, residents are also upset about two decisions made by the Bay Area Air Quality Management District. “[It] gave permits to companies here without letting us know,” he said. “We have to make sure they’re accountable to us.”

Members of CBE learned in April that the air district had green-lighted the Chevron project in 2012 — before the city’s environmental review process had even begun. Last month, CBE filed a lawsuit against the air district for issuing its okay without public review. Phuthama and other Richmond residents are also still upset about the air district’s decision to issue a permit to another company, Kinder Morgan, to start shipping highly explosive Bakken crude oil through its Richmond rail terminal. The air district issued the permit last fall with no public notice.

When the City of Richmond released its draft EIR for the Chevron project, which was released in March, it was met with a flood of criticism, from community protests to scientific analyses to a ten-page letter from California Attorney General Kamala Harris detailing defects in the document. In response, Chevron and the city made some changes that were reflected in the “final” EIR released on June 9.

The new EIR strengthens mitigation measures to lower the health risks from air pollution, and requires Chevron to take these steps before resorting to offsetting increased air pollution with “emission-reduction” credits. The air district granted these credits previously to Chevron when it reduced some emissions. The refinery would also be able to use the credits to claim “no net increase” if pollution worsens.

The refinery has also committed to implementing changes required by the California Division of Occupational Safety and Health in response to the 2012 fire before it begins the new project.

The new EIR also contains an alternative plan in which the refinery would still process higher-sulfur crude oil and gas oil, but the city would reduce the amount of sulfur allowed. This alternative would also bar Chevron from increasing greenhouse gas emissions for its Richmond refinery operations. However, the provision would not apply to the production of hydrogen for sale to other refineries (hydrogen production for sale is part of the plan for the new higher-capacity hydrogen unit). The alternative plan states that Chevron would be able to fully offset the remaining increase in greenhouse gas emissions by buying cap-and-trade credits.

Karras said some of the changes in the new EIR are positive but that they are not enough to protect the community’s health and safety or the global climate. He pointed out that higher-sulfur crude oil and gas oil still increase the risk of accidents when newer, safer equipment is being installed in only a fraction of the plant. Gas oil, for example, will not be processed through the new, modernized crude unit, but through equipment that is decades old and vulnerable to leaks that could cause fires and explosions.

The Richmond Environmental Justice Coalition wants the city to put additional requirements on Chevron before approving the EIR. Coalition members want the city to require Chevron to reduce its smog-forming and toxic emissions to current permit levels before starting the new project. And they want Chevron to replace all old, vulnerable pipes, not just those in the crude unit, and to respond to future leaks by replacing the leaking pipe, not just putting a clamp on it, as the company has done in the past.

The coalition also is pushing for changes in the plans for dealing with the increase in greenhouse gas emissions. The coalition wants Chevron to do everything possible to limit greenhouse gas emissions in the refinery itself before it turns to the state’s cap-and-trade system to offset these emissions. After that, Chevron would focus on offsetting its greenhouse gas emissions locally by funding a Clean Energy Jobs Program designed by the community that would include projects to increase conservation and energy efficiency; support increased use of bicycles, public transportation, and other alternatives to cars; generate clean energy locally with solar energy projects; and more.

“We want this to be the cleanest, safest refinery possible,” Karras concluded. “Chevron can afford it.”