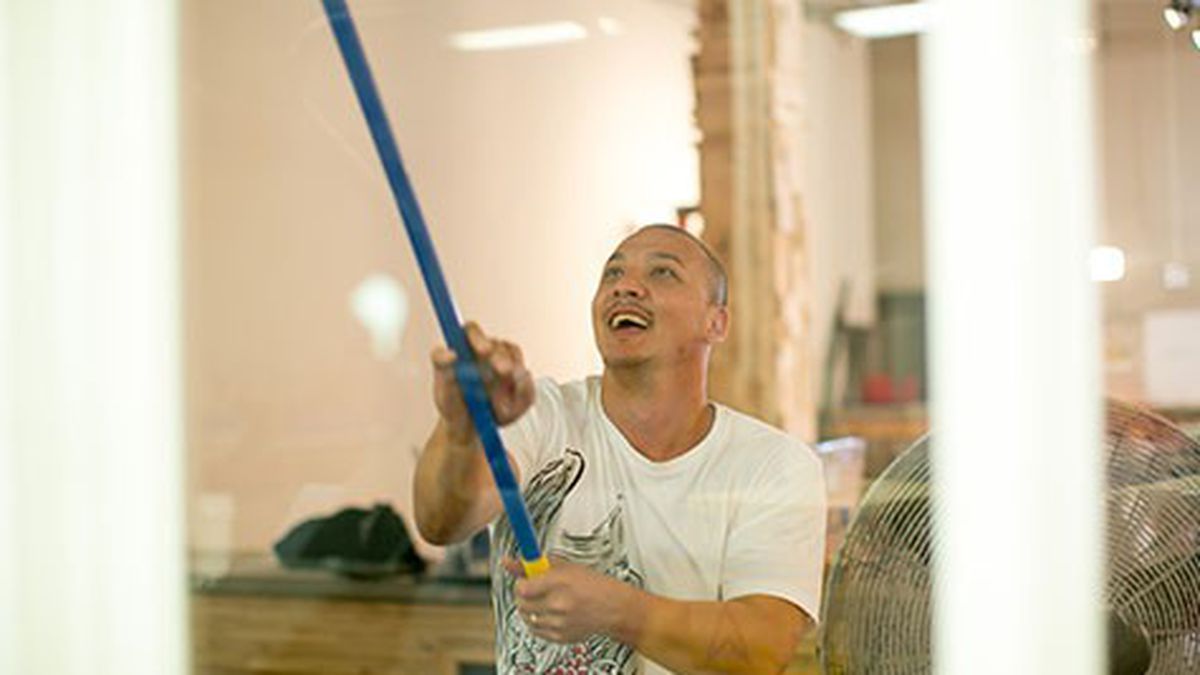 Athen B, a new gallery in downtown, aims to build relationships between the city's emerging artists and the incoming wave of young collectors.

Street art in the Bay Area has come a long way since the locally beloved Barry McGee bridged the gap between graffiti and fine art in the 1990s. Since then, art that calls upon the aesthetic traditions paved by graffiti and other illustration-heavy art forms has now carved a prominent — and lucrative — home for itself within the international contemporary art market. Today, the term “street art” has nearly lost its meaning, except to loosely point to a vibrant league of young, hip artists — few of whom would actually refer to themselves as “street artists” — who are making work that’s best suited for others their age. These artists are suited to paint the offices of new tech startups, do product collaborations and sell work to the young employees of tech companies. San Francisco has a slew of high-end galleries that cater to that demographic, but Oakland has none — despite the fact that many of those artists live on this side of the bay.

Athen B, a new gallery opening in downtown Oakland this week, hopes to fill that gap. The new venue is partially a reincarnation of LeQuiVive Gallery, which quietly shut its doors in March. Athen B will be in the same space at 1525 Webster Street, but with a new look. Former LeQuiVive owner Sorell Raino-Tsui is the director and co-owner of Athen B and former LeQuiVive publicist Brock Brake is now co-owner and curator. Over the two years that it was open, LeQuiVive established a reputation as a go-to gallery for quality, street art-leaning shows, often drawing a young crowd that would linger after openings late into the night. Raino-Tsui said in a recent interview that Athen B will continue to cater to those supporters, but won’t get lost in “the party of things.” The co-owners plan to introduce a new level of professionalism into the space, in hopes of broadening their audience to include more serious art collectors who are willing to make substantial purchases. “There’s a lot of street artists who are really big now, whose works are $50,000, and if they’re going to show here in Oakland, they need to have a place that they can do that,” said Raino-Tsui.

Brake and Raino-Tsui believe the best way to develop that collector base will be to build direct relationships between artists and art appreciators. “There’s a lot of new money and a lot of young people coming in [who] may not know what’s going on here locally, they don’t know how amazing the contemporary art is here in Oakland,” said Raino-Tsui. In order to draw that new demographic into the gallery, Raino-Tsui and Brake are planning an array of outreach initiatives including lectures, mural projects, business partnerships, and events, such as mural tours. All this, they hope, will educate newcomers about the value and importance of the local art scene.

The series of talks they plan to curate will allow the community to get to know particular artists, but also educate them on the financial realities of surviving as an artist and why investing in the arts is important for keeping local creativity healthy. “People have to understand, when they’re investing in art, they’re investing in the artist, they’re investing in the gallery, they’re investing in a larger community that helps fund a lot of things and helps a lot of people survive, ” said Raino-Tsui. He understands that fully embedding that appreciation can take a long time, but he and Brake said that they are committed long-term. Raino-Tsui projects that the young collectors of today will be the billionaires of the future, and he wants to ensure that when those people do have money to give back, they’ll use it to do things like build new art centers in Oakland. “That conversation has to start now in the hopes that it will happen down the line, and we feel like this is where that conversation can happen,” he said.

Brake and Raino-Tsui have immense faith in the artists that they work with, and said that their core motivation is to help those artists progress in their careers. Athen B won’t officially represent specific artists in the way that traditional high-end galleries do, largely because the co-owners are close friends with most of the people they work with, so they prefer to discard the limitations that a contract would typically impose on an artist. Thirteen of those artists also have studios in the back of the gallery, which they rent for only $150 a month. “It’s not just about dollar signs and selling shows, it’s about maintaining these relationships — that’s bigger than anything else,” said Brake.

Brake is a professional photographer, and he has already begun personalizing the Athen B website (AthenBGallery.com) with photographic studio visits. Eventually, every artist with whom the gallery works will have a profile on the site with a list of available works, photos of past projects, a curriculum vitae, and a bio. Raino-Tsui and Brake plan to offer this to businesses as a resource for finding artists to do contract work and collaborations.

Athen B will also be putting out limited-edition prints and other affordable collectibles, such as small, limited-run sculptures. “We know not everyone is ready to buy a $5,000 painting, so we’ll always have that range,” said Raino-Tsui. He also runs a separate business called Brick and Cotton, which allows artists to turn their artwork into wearable merchandise without having to front overhead costs or forfeit the rights to their work.

Despite all of these plans, curating quality shows will remain a priority for the gallery. Brake has already lined up a promising calendar for the rest of the year. The gallery’s first show, which will open on June 13 (with an opening reception starting at 7 p.m.) and run through July 3, is called House Warming, and includes 23 artists who represent a mix of local favorites and international talent. “It’s a way to align the Oakland community with the broader community,” said Raino-Tsui. By mixing recognizable names with what they see as the best local talent, Athen B’s co-owners hope to propel the artists they work with further into the international art arena.

With so many newcomers arriving in Oakland, the topic of gentrification is constantly in the air. Many Oakland residents are up in arms, quickly drawing lines between subcultures — and for good reason. Raino-Tsui said he understands why that’s happening, but he also sees the necessity to build healthy relationships between artists and potential patrons. “All those people are like the next generation of philanthropists and they’re investing in art, so you have to try to at least start the conversation, get them interested, and let them understand what’s happening and why this is important,” he said.

Beyond the Small Chamber