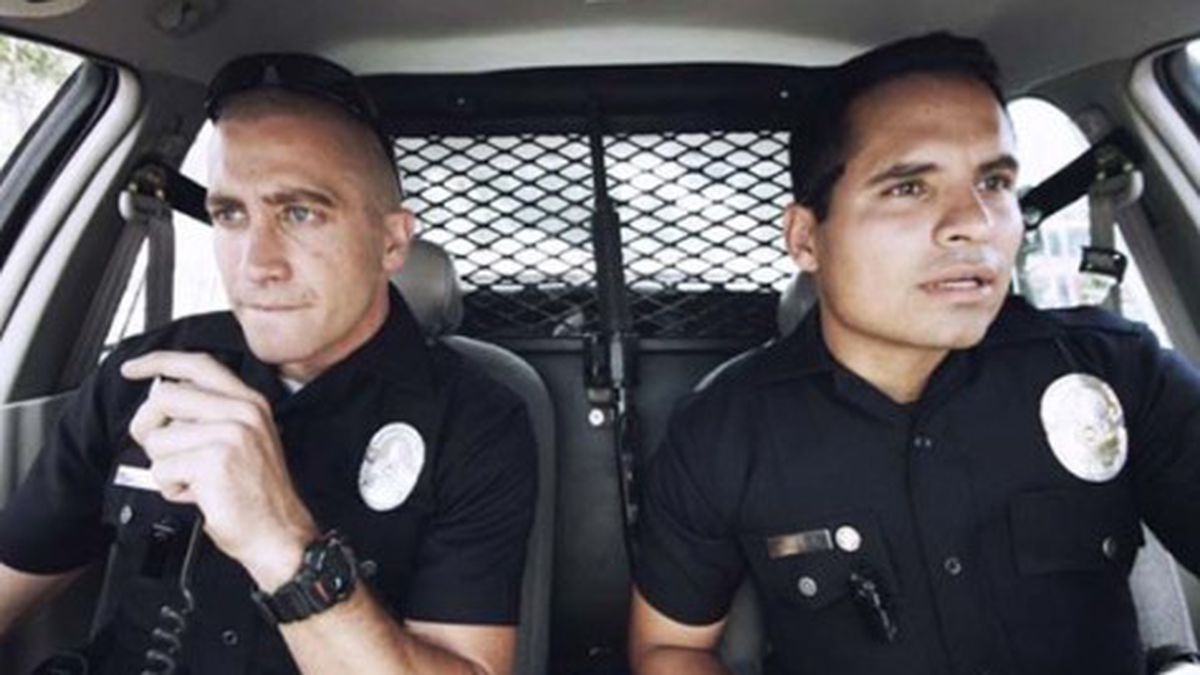 End of Watch opens with a thrilling police chase right out of a Cops episode, shot with a dash cam in a patrol car racing down dusty South Central Los Angeles streets and climaxing in a piece of action unlikely to ever be broadcast on TV. The scene then switches to the police locker room where officers Brian Taylor (Jake Gyllenhaal) and Mike “Zee” Zavala (Michael Peña) establish that they’re the best of friends as well as squad car partners, and also that they record everything that happens to them with tiny digital cameras they wear on their uniforms.

In fact, one of the main points of David Ayers’ bracing actioner is that everyone, everywhere in South Central is recording everything all the time. We might assume this would mean that both cops and robbers are extra careful to avoid incriminating themselves, but we’d be wrong. The device is more of an excuse for up-close, in-your-face interpersonal relations, mostly fights, with handheld TV news immediacy. End of Watch belongs to the long roll call of movies that try to make sense of the LAPD by zeroing in on a couple of congenial, regular-guy “blue knights.” It succeeds as far as it goes. But it goes pretty far in any case. Fans of brutal, bloody shootouts will find plenty to gnaw on.

Lots of stuff cookin’ in the hood. Loud backyard parties. Dazed crackheads misplacing their children. Guys with gold-plated AKs. Human traffickers running torture chambers. Old ladies stuffed into garbage bags. In one key incident, officer Zee engages in hand-to-hand, “straight-up-gangsta” combat with a guy named Tre (Cle Shaheed Sloan) in a living room, and earns street points for stand-up-ness. But the signal event is a drive-by shooting by a van full of eses directed at a yard full of Bloods. Seems the eses, led by a big, evil dude called Big Evil (veteran actor Maurice Compte), are tied up with a Sinaloa drug cartel, an alliance with severe implications for Brian and Zee.

Our heroes don’t spend much time dunking donuts or peeping through transoms. They’re the type of movie cops who are present at each and every major crime scene in their district, so much so that on one occasion they step on the toes of a squad of ICE agents. Brian and Zee crave excitement and busting bad guys but at the same time have wives (Anna Kendrick’s Janet for Brian, Natalie Martinez’ Gabi for Zee) and families that hang out together off-duty, roasting weenies and attending weddings. In short, they’re the best possible cops in Los Angeles, but they’re not satisfied. We keep waiting for one of them to slip up and display a hidden flaw, but it never happens. Not even a Brokeback Mountain thing.

In multitudes of adventures built around the LAPD — among them Colors, L.A. Confidential, and this year’s Rampart — the route to the morally ambiguous heart of the department has been through a bent cop, a rotten apple that the honest cops can vanquish for the good of all concerned. Not here. There are one or two possibilities, but nobody steps forward. Writer-director, longtime Angeleno, and putative police enthusiast Ayer (Training Day, Harsh Times), whose Street Kings was co-written by crime-fiction cavalier James Ellroy, evidently eschews Ellroy’s penchant for internal funk among the Southland fuzz.

A straightforward drama like End of Watch almost demands a rotten cop — there’s no vital introspective friction without one. In this film, no one person is the enemy-in-chief, and yet everyone the two buddies run into is a potential foe. The theater of operations is thus far slipperier, but unfortunately so is the dramatic tension.

Most of these quibbles fly out the window like stray armor-piercing rounds when the movie’s squabbles pop and boil. Gyllenhaal, one of America’s favorite conflicted everymen, makes all the right moves alongside Peña, a hard-working actor frequently seen as a deceptively soulful military type (The Lucky Ones) or law enforcer (Everything Must Go). And filmmaker Ayer knows exactly how to milk a firefight. It’s the bang-bang that glues us to End of Watch. We’ll have to save the nuances for another time. Who needs moral ambiguity, anyway?