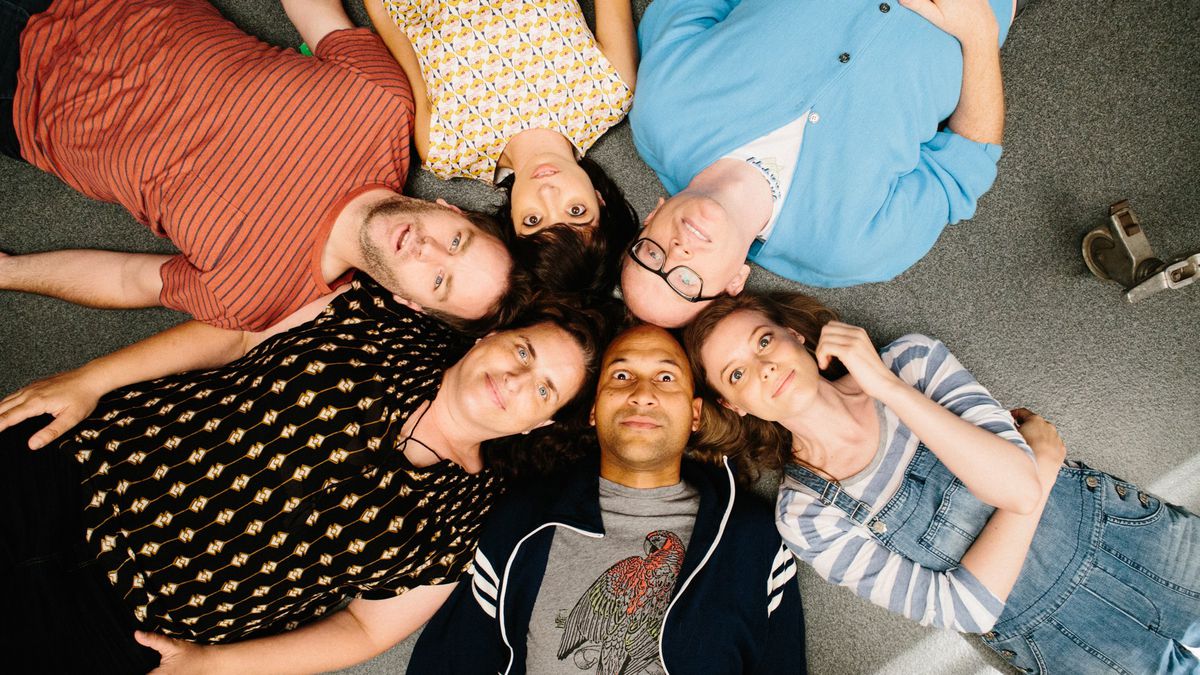 In Don’t Think Twice, the six members of the comedy group The Commune behave the way improv performers are supposed to. Impossibly eager and switched-on, they woodshed improvised comic sketches 24/7, even while in bed with each other in their New York apartments. They also sit around and smoke weed together while watching Weekend Live (based, natch, on Saturday Night Live), their number one dream job. The forced laughter reaches dangerous levels. Meanwhile they continue their day gigs — “come try this” guy in a food store, waitress, bike messenger, teacher, etc. — while striving mightily for that big break. More than anything else, we are shown that this style of entertainment is more difficult to succeed in than many other showbiz pursuits. Accordingly, fear of failure is uppermost in each of the characters. Only the strong and lucky will survive.

Writer-director Mike Birbiglia, who portrays Miles, one of the Commune-ists, made Sleepwalk with Me (2012), a desperately awkward character study about an untalented stand-up comic on the road playing dismal venues. Where that showbiz yarn was hard to take — it resembled an Andy Kaufman exercise in self-humiliation — in Don’t Think Twice Birbiglia opts for a classical group dynamic, fleshed out with reasonably sympathetic figures. The camaraderie is tested when Jack (Keegan-Michael Key) and Samantha (Gillian Jacobs) get called to audition for Weekend Live, and the other four are left to sort out whether they want to stay in the business after all. Cue defiantly mean-spirited bits and a losers’ road trip.

If you want to make a movie about show business failure you’d better make it funny — something along the lines of Broadway Danny Rose or, on the bizarre side, Shakes the Clown. Birbiglia’s scenario is neither especially hilarious nor edgy, but it builds, thanks to the personalities. We can fully imagine the characters fizzing and whinnying on a flimsy stage for starvation wages. Dope-smoking Lindsay (Tami Sagher) is the class grump. Bill, the pint-sized nerd with the glasses (Chris Gethard), is the sort who never gives up no matter how tough it gets — when his father gets hospitalized, the troupe’s condolences sound like the lead-in to a sketch. Cute, pixie-ish Allison (Kate Micucci) is forever working on her cartoon-graphic novel, and never finishing it. Jack looks ahead to network TV by perfecting his Barack Obama and Liam Neeson impersonations. Samantha’s favorite impression is Katherine Hepburn — did she never see Catherine O’Hara’s on SCTV? Sam blows off steam by teaching an acting class.

Birbiglia saves the most complex character for himself. Frozen out by the group when sudden success causes personal rifts, he and his girlfriend Liz (Maggie Kemper) forge ahead with their own plans in spite of the surly club owners, hard-boiled TV producers, punchline-blowing hecklers, and dinky houses. The Commune players spend a large percentage of their waking hours sucking up to visiting network execs in the audience. Ben Stiller makes a cameo appearance as himself, and his ad-libs are just as bewildering as everyone else’s.

And yet there’s something invigorating and just a shade inspiring about the troupe bouncing stupid ideas off each other night after night — the standard audience-suggestion lead-in is: “Did anyone here have a really bad day today?” — waiting for lightning to strike. Don’t Think Twice sets the mood by running a short intro clip at the beginning, showcasing the roots of improvised sketch comedy at Chicago’s Second City, where Bob Odenkirk, Tina Fey, Mike Nichols, Shelley Berman, Jason Sudeikis, Joan Rivers, John Candy, and John Belushi killed nightly, once upon a time (Key and Sagher are also recent SC alums). Filmmaker Birbiglia understands that improv is an acquired taste, but wisely lets his performers prove themselves on their feet, doing what they do, in a backstage pastiche where the losers are far more interesting than the winners. As one of the characters says: “It all depends on the group.”