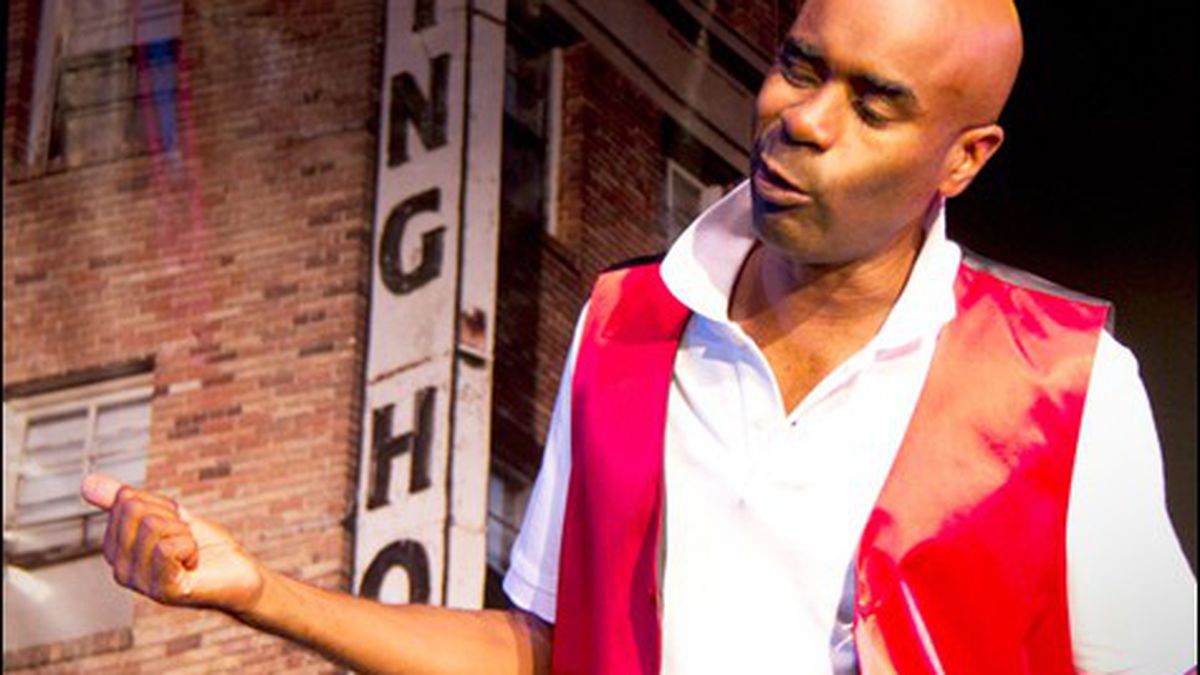 The maker of East 14th brings us the next chapter of his autobiography.

To really understand Don Reed’s performance style — not to mention the repertory of characters he introduces, then forgets about, at the beginning of The Kipling Hotel — it helps to have seen his previous one-man show, East 14th. That one traced Reed’s childhood in East Oakland, initially living under the iron grip of his religious stepfather, but ultimately seeking refuge with his biological father, who was a moderately successful Seventies pimp. (According to Reed, the best metric for “success” was the number of big fashionable hats he owned.) With its morbidly humorous storyline and slick presentation, it found favor with critics and enjoyed an extended run in both San Francisco and Berkeley. Reed got his own well-deserved cult of celebrity.

So it’s not surprising that he used a very similar template to tell the story of Kipling, which is basically just the next chapter in his autobiography. (The full title is The Kipling Hotel: True Misadventures of the Electric Pink ’80s.) This one takes place during the era of stonewashed jeans, new wave music, the crack epidemic, and, of course, the jheri curl. It’s also the era of Don Reed being broke. Not that poverty was a new or unusual state for a kid from East 14th Street (now International Boulevard). But this case seemed more dire. While a well-heeled college student might get a grace period to learn how to be an adult, a kid from the inner-city had no such option. He had a partial scholarship to cover tuition at UCLA; his only option for room and board was a crackhead friend of the family.

That’s the situation with which Reed opens his play, presenting the dramatic details with a disarmingly cavalier air. The crackhead lends himself to absurd physical comedy — Reed compares his drug addiction to a squirrel hunting for nuts — and also sets up an obvious roommate horror story, although Reed elides most of the specifics. He also glosses over the back story of black America in the early Eighties: post-civil rights, pre-Obama, crippled by Reaganomics and an unfair drug war. It’s the lens through which to view all these characters, but Reed starts off assuming we know that already. It’s actually pretty refreshing to have a narrator who never underestimates the intelligence of his audience.

It’s also useful to have a problem that propels the story forward right away. Reed might sum the problem up thus: He had no money. He had job. He had the crackhead-living blues. In aggregate, those misfortunes didn’t amount to actual, tangible despair, but they were significant enough to send him to the classified section of a local newspaper. After running the gamut of crappy, low-rung jobs that were available in Los Angeles — namely, storage worker and male stripper — he found work as a brunch server at The Kipling Hotel, a retirement facility with chintzy decor, cranky residents, free room and board, and no remuneration for employees. The fact that he took it speaks volumes about the former crackhead roommate.

By using The Kipling as a framing device, Reed enables himself to talk about being young, enterprising, and African American at a time when America’s race and class politics were still pretty retrograde — whether or not they’ve evolved is of course a point of contention. But he also has a story that’s funny, self-deprecating, sentimental, and personal. The protagonist who emerges has his own slew of vices; he’s a bit of a spendthrift and a Casanova; and he commits the cardinal sin of accepting hair advice from a junky. But he’s also relentlessly charming.

And that quality really becomes a storyteller. Not to mention that Reed is also a fantastic writer. He provides just enough detail to give you a mental image, with minimal set design and props. (The only set pieces at this performance are an empty dinette table and chairs, and a small backdrop that shows the hotel facade.) The Kipling, for instance, is a classic fixer-upper, with its decorating scheme of 1970s adornments, slapped onto a 1920s frame — hence the brown-orange “borange” carpeting. Then there are the inhabitants: a once-successful womanizer with no teeth, a cranky Holocaust survivor, and a receptionist who looks like a cartoon rat, albeit in a very modelesque way. Reed even lends a lot of cinematic juice to his descriptions of Eighties hairstyles, with their asymmetrical flip-flops and slick, baby-oiled surfaces. Most of his shows include at least one bad-hair-product gag, in which an elaborate coiffure is set outside to melt in the sun. It’s a cheap laugh that works every time.

Reed is an alluring, endearing, magnetic entertainer because of his conversational style, his unsparing use of profanity, his agile dance moves, his rubbery-limbed body, and his ability to jest about personal tragedies or grave social issues without seeming insensitive. Even when Kipling Hotel devolves into a morality tale, it’s still engaging. The last twenty minutes of Act II could be truncated; the rest is terrific.

Best Preventive Health Care: A resurrection of the body