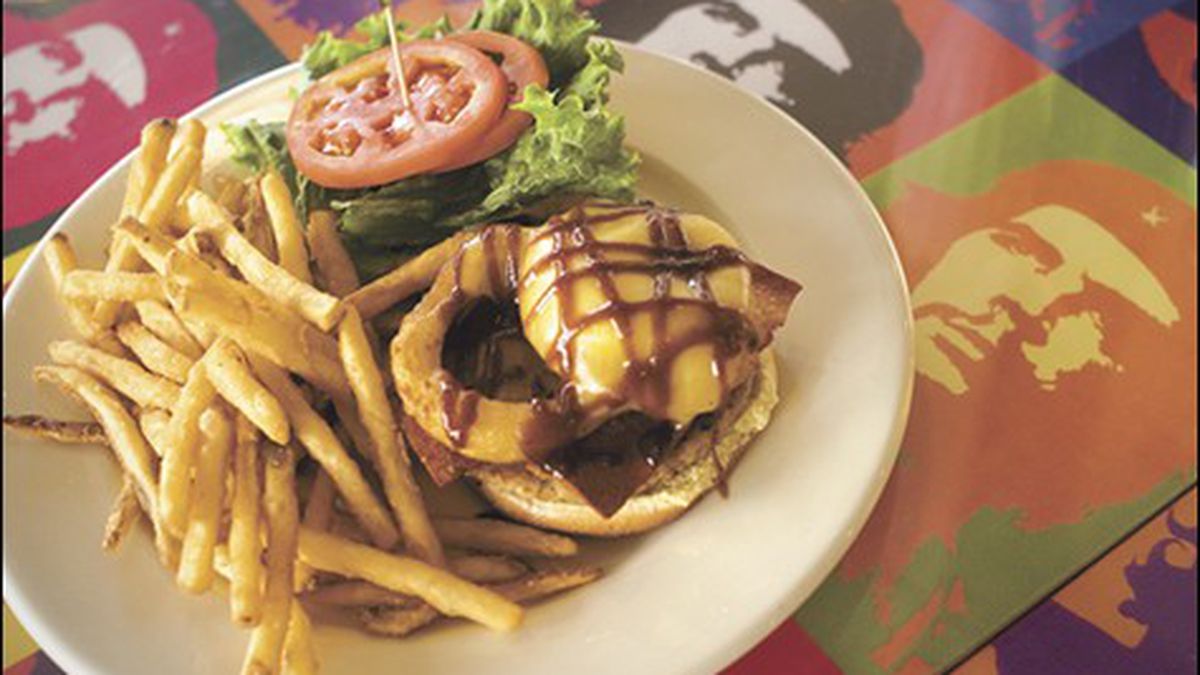 Do the Time Warp at the Saturn Cafe

Diner food gets updated fleshlessly, with a shout-out to Che.

It’s called the FLT, which stands for Fakin’ Bacon, lettuce, and tomato, and it’s a revelation, a glorious sunburst of juicy, fresh, organic produce and time-tested, masterful mock meat on square sourdough slices whose grill-kissed summer-cloud whiteness shouts Classic sandwich, born in the USA. Bisected into jaunty triangles, it delivers the salty, smoky, chewy, crispy, protein-rich power-punch of a BLT, but with a deft disappearing-pork switcheroo that renders this, for vegetarians who miss the taste of meat, the lunchroom version of prescription eyeglasses: Once I was nearly blind, but now I see.

Skirting the sandwich on its sturdy white plate is a mercifully ungreasy golden shock of those thumb-thick guilty pleasures known as steak-cut fries. That name’s ironic in an entirely fleshless restaurant, the brand-new Berkeley sister of a beloved Santa Cruz institution. By any name, such fries are sines qua non here because the Saturn Cafe is a retro diner, a fact made face-punchingly clear by its glorious silver-glitter vinyl booths and dinette chairs, swivel-stooled counter, open kitchen, and walls whose hue in a good mood you’d call bubblegum pink, in a bad mood Pepto-Bismol.

One does not want to be in a bad mood before a meal, especially not when nacho fries and grilled-cheese sandwiches and peanut-sauce tofu and McConnell’s Ice Cream milkshakes are on the menu. But damn: After we ordered, time stopped. Ten minutes. Twenty. Then more. Other diners were waiting, too, most of them wearing fixed so-glad-to-be-here grins as hipster music blared and the clangor of dishes, chairs, and conversation made me want to cry. This is a shiny hard place with no soft spots to absorb spare sound.

And it is an ironic place. Painted on one wall, visible from every table, is a quote: At the risk of seeming ridiculous, let me say that the true revolutuionary/is guided by a great feeling of love. — Che Guevara

It’s the only quote in here. Printed in boingy, birthday-cardish black, these are the words of someone who, at the moment in history when American restaurants such as those the Saturn Cafe emulates were flourishing, was supervising firing squads.

Developed in the 19th century but thriving in the mid-20th, the quintessential American diner serves affordable, filling food amid friendly, casual comfort. Diners were fast food’s warmhearted ancestor: a quick, customer-centric, class-blind home-away-from-home for midcentury drifters and doctors, road-tripping families, and first-daters teetering toward love. With their bottomless cups of coffee, diners are capsules of the American Dream.

The Saturn Cafe pays homage to all this, but it’s a wink-wink homage refracted through the increasingly postmodern lenses of every decade since, a silvery-glittery-swervy-curvy mimicry-mockery in which midcentury America looks beautiful and deluded and doomed, its dream hilariously failed. That America-hating, execution-facilitating Marxist guerrilla Che reigns here — not only on the wall but also depicted two dozen times on our tabletop, à la Andy Warhol — says much about a culture that no longer knows the meaning of hypocrisy.

When our Super Sampler arrived, we fell upon this mountain range of indulgently creamy sweet-potato fries; crisp, salty, slender French fries; juicy, batter-fried zucchini sticks; crunchy taquitos; and dense onion rings. Competing for attention with the big ketchup and mustard squirt bottles on every table is wasabi dip, another of the time-warpers that make the Saturn’s vegan/vegetarian and mainly seasonal/local/organic menu so American Graffiti meets Blade Runner meets An Inconvenient Truth.

Our huevos rancheros comprised black beans boiled to perfect doneness, nestled into cheesy, fluffy scrambled eggs: a protein paradise, big enough for two. Our baked mac-and-cheese was a bit light on the cheese, but the mac — pasta shells, actually — was exquisitely textured, neither too firm nor too soft. Diner food is comfort food and, for some, meatless diner food is double-comfort food: Yet for us on that first visit, it was double-comfort food partaken in discomfort, between the din and Che’s homicidal glare. How would he like the prices here, the $9.50 nachos and $7.25 cheese fries? What would he say about the Saturn Cafe T-shirts and other merchandise for sale?

Subsequent visits — one of them cortex-corrodingly loud, the next not quite — yielded further revelations in the form of Soyrizo-stuffed breakfast burritos; zesty Southwestern posole, thick with earthy, flesh-tone hominy; and the Cowgirl Blues Salad, loaded with mock bacon, mock chicken, blue-cheese dressing, and blue-cheese chunks. Its name exemplifies that postmodern knack for referencing multiple eras in a single go, in this case name-checking Tom Robbins‘ cult-favorite 1976 novel Even Cowgirls Get the Blues.

In a similar vein, the soul-satisfying barbecue-sauced Fakin’ Bacon veggie cheeseburger that’s called the Space Cowboy is funny because (1) it’s a veggie burger, (2) its name comprises “space” and “cowboys,” two Fifties clichés, and (3) its name is also the name of a character in a Steve Miller Band top-ten hit from 1973, when retro Fifties kitsch with a cocaine inflection was faddish.

Currently open nightly until midnight, the Saturn is awaiting permission to stay open until 3 a.m. The Saturn’s Space Lounge, featuring live acts, is due to open in September.

Behind those glad-to-be-here grins are several inconvenient truths. One is that we Americans love to sprawl in warm, spill-proof booths. Another is that some can’t reconcile their love of diner food with what it represents: that shiny-Chrysler postwar glow they know only to mock. With its massive milkshakes and sandwiches stuffed so full that they drip, the Saturn lets its patrons eat diner food in a diner while feeling superior to diner food and diners. Hold that pose: Otherwise we might be mistaken for American dream chasers after all.