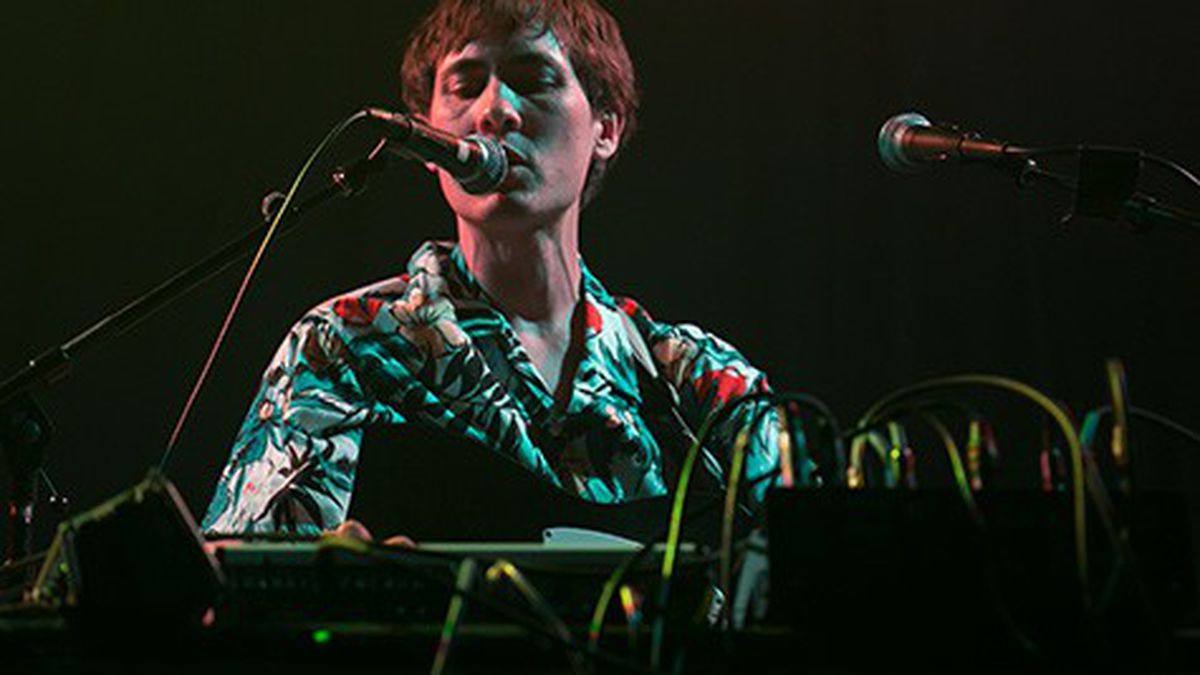 Light bounced between a busted disco ball and chintzy red streamers, illuminating a small stage in which the rock foursome Rat Columns yanked beers from a decrepit cooler and prepared to play. Foremost was David West, standing rigid with a guitar strapped high against a shirt buttoned to the neck. Without introduction, the band began. West’s posture loosened, his head wrenching askew and affixing itself to the mic while his body undulated to brisk backbeats. Buoyant, intertwining guitar leads tangled with West’s breathy coos and oohs for a set that drew from the fleeting pop songs on Rat Columns’ sophomore album, Leaf. The place spruced up, the disco ball shone anew, and for about 25 minutes the dive bar felt grand.

Two days later, West performed as Lace Curtain at a larger venue supporting touring acts. He stood alone, flanked by two microphones, and coaxed beats from a table of electronics. The tracks intermittently fluttered and stopped, flirting hesitantly with dance-floor viability but ultimately receding into gauzy textures and nebulous vocal loops. He kept gutting the low end, withholding the most viscerally rewarding frequency range, which drove attention to stranger, more challenging passages. He played a guitar, mostly for confection, strapped again across his upper chest. Rather than the stiff ensemble from a couple nights before, West wore a billowing tropical shirt.

“I’m going for a bit of an American-G.I.-in-the-tropics-on-downtime kind of look,” he said after the set. Travel, struggle, relax in nature — the description spoke to West’s varied experiences as a bandleader and collaborator since 2009, when he moved to San Francisco from Australia. Since then, he’s maintained Lace Curtain as an international electronic music collaboration with Australia’s musical polymath Mikey Young; Rat Columns as a breezy, romantic pop outfit with revolving band members; and Rank/Xerox as a stark post-punk trio founded within months of arriving in San Francisco. Since 2013, he’s toured on three continents with Rank/Xerox, Rat Columns, and briefly with Young in the acclaimed group Total Control. In between recent outings, he’s been recharging locally.

“I’ve never been in one of those bands that just get in the van for a year,” he said. “That appeals to me — it’s very romantic — but it hasn’t happened because I’ve been a bit transitory. … I’ve been jet-setting for a while.”

But West has a surprising anchor. He’s an artist who’s engaged in a global music community — emailing Lace Curtain beats from San Francisco to his Australian collaborator, which appear on vinyl through the reputable New York labels DFA and Mexican Summer — who relishes greenery, nature, and especially the time of year known in Australia as simply “harvest.”

West grew up on a farm in rural Western Australia. He appreciates harvest time more now than as a kid. “It’s great to see the farmers and truck drivers being happy and jovial, because usually they’re suffering,” he said. “The primary producers get fucked over. … It’s like music.” Last year, he harvested wheat for two months on a farm near his parents’ house. The music video for Rat Columns’ track “Another Day” pays tribute to the scenery. It depicts West alone in a wheat crop at dusk. Bittersweet keyboard sheen reflects the waning light. “The next day, that crop got chopped down,” he said. “It was glorious.”

Most days during harvest, he’d drive fifteen minutes to work while listening to J Dilla’s revered sample tapestry Donuts. With what little energy remained after working thirteen-hour shifts in the sun, West began stitching together a continuous mix-tape-style assemblage of his own, chopping up old demos and multi-track snippets sourced from a couple of hard drives.

The result, Drop Out of Collage, is West’s only release under his own name. It opens with quick cuts between unnerving incantations, feedback, tape-hiss, and sporadic shouts before settling on a warbling drum-machine groove. The intro has the effect of a flash-forward video montage, the sonic equivalent of TV plot recaps that bring viewers up to speed. Only, the capsule history is for West himself, a way to reckon with and maybe jettison a mightily busy creative period. It’s telling that for West’s only “solo” title, he culled bits and pieces from work with other people. He called his general approach “magpie,” as in habitually collecting unique partnerships, platforms, and material.

Drop Out Of Collage by David West

Referring to Drop Out of Collage, he said, “I love editing. I think a sharp edit is a thing of beauty.” Considered broadly, “editing” describes his approach to mediating collaborative relationships. For instance, he welcomes the fact that Rat Columns’ songs change with every new live incarnation. He enjoys photography and video, but feels comfortable ceding album art decisions to designers he likes. To explain his lyrics in Rank/Xerox — in which songs such as “Nausea” grapple with urban anxieties — he credited the rhythm section’s performances.

“It’s a harsh, abstract dystopian vibe because their music suggests that — their music dictated it to me.” Rank/Xerox is West’s only project with a consistent lineup. West, bassist Kevin McCarthy, and drummer Jon Shade began playing together in 2009. Among others, Rank/Xerox fell in with Grass Widow and released a split tape. Grass Widow garnered more name recognition, while Rank/Xerox’s sole album, released eponymously on Make-A-Mess Records in 2011, accrued cult respect, sold out, became collectable, and eventually saw reissue ahead of the band’s European tour last year.

The magpie habit has drawbacks. A devout Rank/Xerox fan might be unaware of Lace Curtain or vice versa. “My brand is sort of diluted,” said West with a smirk, “but the advantage is being more indulgent to my whims and being able to just produce more work.”

West doesn’t want a day job, but he values work. He expressed admiration for both the hardened farmers in Australia and committed artists in America, where he considers creative endeavors to be more challenging. “Australia is nice and comfortable,” he said. “There’s more funding for the arts. You can get grants for your garage rock band.” For playing music though, “America is hard and weird and more stimulating,” he said. “It’s more exciting. There are more ways to very be humbled. Success is just not losing your shit on tour, not limping back.”

He spoke from experience. On Rat Columns’ most recent US tour, an emergency left the band without a drummer. In Portland, they programmed a borrowed a drum machine at the last minute. Lillian Maring, former Grass Widow drummer and current Ruby Pins leader, played drums without preparation for a couple shows. In Boise, West picked out a sharply dressed crowd member and asked him to keep time. Shade, the drummer from Rank/Xerox, flew to Chicago and finished the remaining dates.

West leaves for harvest again in November. He spoke vaguely of plans afterward, cryptically mentioning a “spiritual quest that doesn’t involve spirituality,” recording some techno, or just touring more. It seemed like he hadn’t thought beyond the annual reap. “When I was a kid on the farm I’d mostly watch Australian music videos,” he said. “Now I’m looking forward to watching the sunset in those golden fields of wheat.”