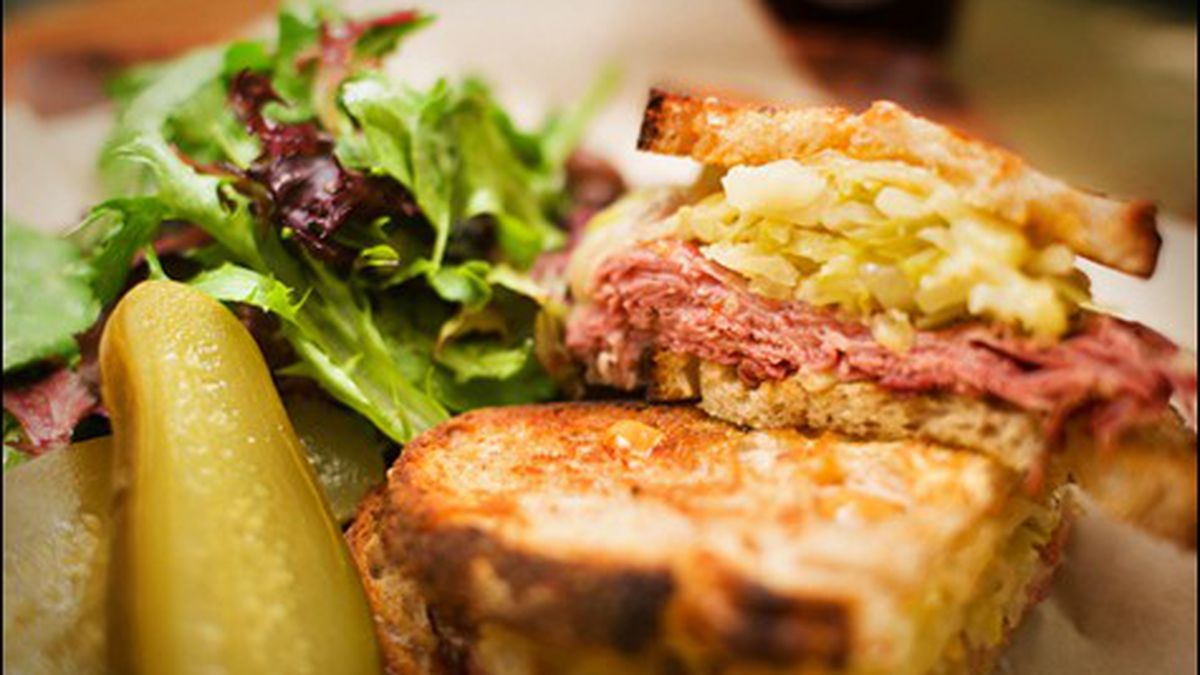 The Uptown sandwich shop serves meat with a conscience — although most of its customers probably don't realize it.

These days, more and more of the food discourse centers on “conscious” meat consumption and how we can raise and slaughter animals more humanely — by choosing pasture-raised livestock and eating meat seasonally. All of a sudden butchers are the new rock stars of the culinary world, and the moral high ground no longer seems to be the exclusive domain of vegans.

Against this backdrop, it makes sense that one of Oakland’s most talked-about new restaurants would be Stag’s Lunchette, a breakfast-and-lunch spot from chef-owner Alexeis Filipello, who also owns the nearby bar Dogwood. Stag’s is a sandwich shop, but above all it’s a place that takes meat seriously — where, according to Filipello, all of the meat is good meat: cruelty-free, hormone-free, antibiotic-free. Just about everything is brined/cured/dry-rubbed/smoked/etc. in-house, and for a place with a tiny kitchen, the restaurant’s ambitiousness is impressive. Filipello smokes her own pastrami, cures her own bacon, and roasts suckling pigs on the rotisserie to boot.

The restaurant’s somewhat-hidden Uptown location was most recently home to Uncle Dougie’s (R.I.P.), whose red-sauced offerings were long an object of my obsession. And while it wouldn’t be accurate to say that Stag’s Lunchette is the direct opposite of Uncle Dougie’s on the sandwich-shop spectrum, it’s hard to overstate how different the restaurant looks. Gone are the graffiti and the old-school red-checkered tablecloths. In their place: tall built-in tables, wood paneling, antlers on the wall, a mason jar filled with arrows, and sepia-toned sketches of forest scenes featuring — of course — lots of those eponymous stags.

The overall aesthetic might accurately be described as “hipster hunting lodge” (not unlike the decor at Dogwood), but the truth is that Stag’s seems to get as much of its business from tie-wearing corporate warriors as it does from the disaffected artist types who populate certain East Bay cafes. If my two visits during the lunch rush were any indication, business is good: There’s usually a line, and you might even need to share a table with a stranger.

But although Filipello has fashioned the shop as a “cruelty-free” lunch counter, Stag’s isn’t the type of place where the staff is likely to lecture you on food politics. Only occasionally will you see the name of a farm listed on the six-sandwich chalkboard menu — the menu isn’t littered with buzzwords, and the prices are reasonable (mostly $10 or less). Filipello suspects that the majority of her customers don’t even know that Stag’s is using meat that’s sustainably raised. As she put it, “Maybe people can’t taste the difference in their mouth, but I can taste it in my brain.”

All in all, what comes across feels less like the self-importance of food people who take themselves too seriously and more like a good-natured, chummy swagger.

“Beethoven. Mozart. Good songs,” one of the cooks quipped as he handed me my order. “I make sandwiches.”

Take a bite into, say, the sumptuous roasted lamb sandwich, and it’s hard to feel bothered by that kind of braggadocio. Served in a pillowy ciabatta roll, the lamb was tender and moist, cooked to a beautiful shade of pink. The meat was gamey enough to get your attention, but it was balanced by bold Mediterranean flavors: tahini, spicy roasted tomato, and lightly salt-pickled cucumber slices.

The pastrami sandwich with Emmenthal cheese and house-made sauerkraut, meanwhile, was a worthy entrant into the local pastrami pantheon. Stag’s is one of the saltier and more aggressively spiced versions I’ve had — but very tasty, if nontraditional. A “piquant dressing” provided a dose of sweat-inducing heat, and because the brisket had been basted with butter and demi-glace (instead of being steamed), it ended up with a nice dense chew.

Even for the sandwiches I didn’t love, I appreciated the quality of the ingredients and the amount of care that went into each component. Subtly spicy pork-and-beef meatballs had bits of fennel seed and were draped in an excellent sweet tomato sauce made from fresh San Marzanos — but the proportions of the sandwich were off, so you ended up with bites that were mostly bread. And, as with the lamb, the cold roast beef had been cooked to perfect rareness, but the beef’s delicate flavor was overwhelmed by a heavy-handed slather of spicy yellow mustard.

Anyway, the menu changes all the time — usually at least twice a week (only the pastrami is a fairly steady constant) — so it’s not surprising that there would be hits and misses.

It’s worth noting, however, that during both of my lunch visits, the only substantial vegetarian option was a gussied-up grilled cheese sandwich. The display case in front always has a couple of side-dishy salads that you can order — a potato-and-cauliflower salad, for instance, and a raw kale salad jazzed up with corn kernels and bits of feta — but neither was memorable enough to feel like much more than an afterthought. A one-dollar house-made pickle was soggy and sad.

So Stag’s still needs to step up its veggie game. What you shouldn’t sleep on, though, is the restaurant’s breakfast menu. From the perfectly constructed bagel platter (featuring Baron Baking’s transcendent bagels, scallion cream cheese, and house-smoked trout) to the super-fresh ricotta cheese (a new batch whipped up every morning) that’s served with marcona almonds and local honeycomb, every item I tried was spectacular.

Interestingly enough, deer is not currently on the menu at Stag’s — despite Filipello’s self-proclaimed passion for (eating) it and it being the restaurant’s unofficial logo/mascot. It turns out fresh venison isn’t so easy to source, but Filipello says she’s working on it. Here’s to hoping that whatever incarnation it takes (deer salami? deer sausage?), it’ll be something both conscious meat eaters and folks who just want to grab a quick sandwich during their lunch break will agree is delicious.

Friday Must Read: The GOP Wants to Shut Down Federal Gov’t...