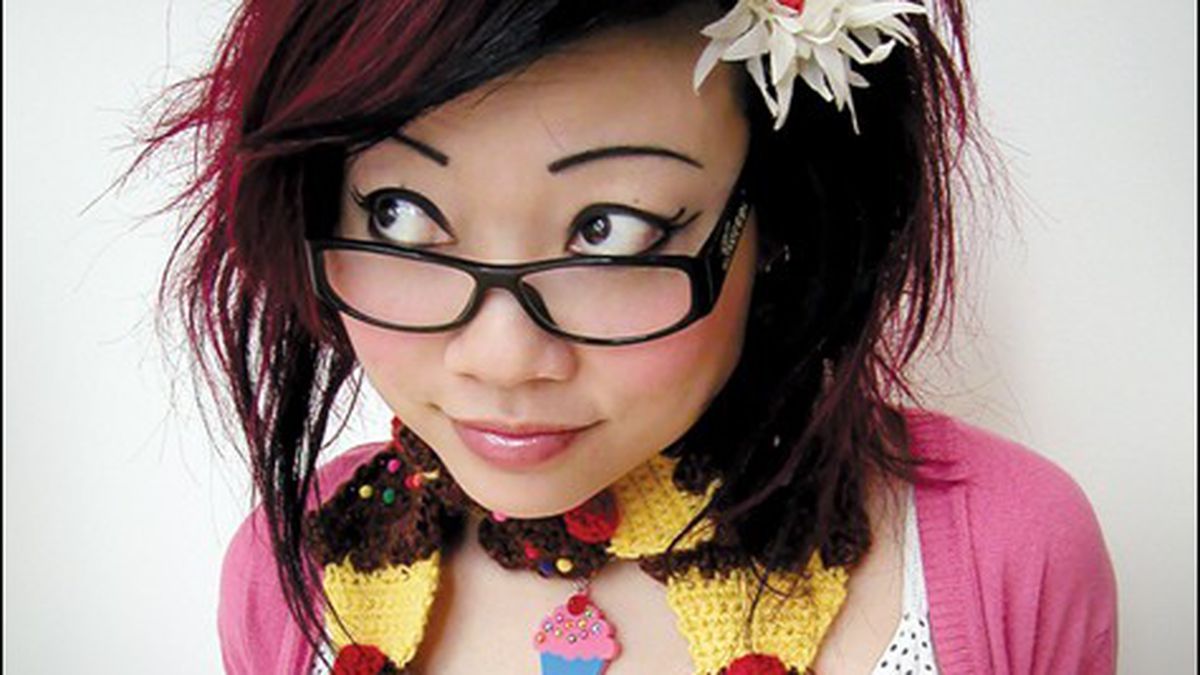 Cupcakes are tattooed on her belly, red licorice on her back. A triple-decker ice-cream cone and hot-pink marshmallow Peep are tattooed on her right arm. She wears a fuzzy scarf comprising a dozen crocheted sugar cookies. Is it any wonder that when this ex-literary agent became a full-time crafter and sought a pseudonym, she chose Twinkie Chan?

“I think my brain is just naturally obsessed with food,” she said. “As a kid, I’d look at random objects, like funny rocks, and see hamburger buns or chunks of salami, and this is how a lot of my playtimes began. Free toys from nature! So even as an adult, when I’d see really cool art yarn or handspun yarn, I’d see a ball of scrambled eggs or cotton candy.”

After moving from Palo Alto to San Francisco and finding its weather unnervingly cold, Chan began crocheting scarves. Adapting the craft she’d learned at age ten from a friend’s grandmother, she made dangly chains of crocheted cupcakes, cookies, and Valentine candy hearts in mouthwatering pinks, whites, and golden-browns.

“I just thought it was funny,” she said. But strangers wanted to buy them. Creating more and more patterns — sprinkle-topped Pop Tart scarves, Popsicle scarves, candy-corn scarves, and crocheted boxes of Milk Duds and Peeps — Chan launched a web site in 2005, then a series of videos. Expanding to savories such as corn-dog, fried-egg, bacon, and sushi scarves and squeezable, anthropomorphic, beady-eyed “Crochet-ter Tots,” she quit her day job and began a new career that now includes brooches, accessories, and a book: She’ll model some of her designs, discuss how she made them, and sign Twinkie Chan’s Crochet Goodies for Fashion Foodies: 20 Yummy Treats to Wear at Books Inc. (1760 Fourth St., Berkeley) on Tuesday, November 16.

“I want to have a craft-show booth with only cake tissue boxes. … I’ve heard a lot from people that they love the cozies but don’t use Kleenex,” she said. “I also really love making purses that look like funny savory foods, like hot dogs or steaks, but these food items tend to not do as well as the sweets-themed items like cookies and cupcakes. I still have love for the steak purse, though. I think it’s hilarious. Once I also made a ham scarf covered in pineapple rings. That didn’t go ever that well, either.”

Chan’s pseudonym emerged because “I wanted a superhero crafting persona when I started, just in case my publishing clients might find out that I also did all this silly craft stuff on the side. … I wanted a name that was cute and memorable, and ‘Twinkie’ is also a colloquial term for Asian kids who grew up in America — yellow on the outside, white on the inside — so it’s kind of a subtle wink that nobody really knows about.” 7 p.m., free. BooksInc.net

A Holistic Approach to Helping the Homeless

Bored with Your Corolla / Prius / Civic? Have We Got...