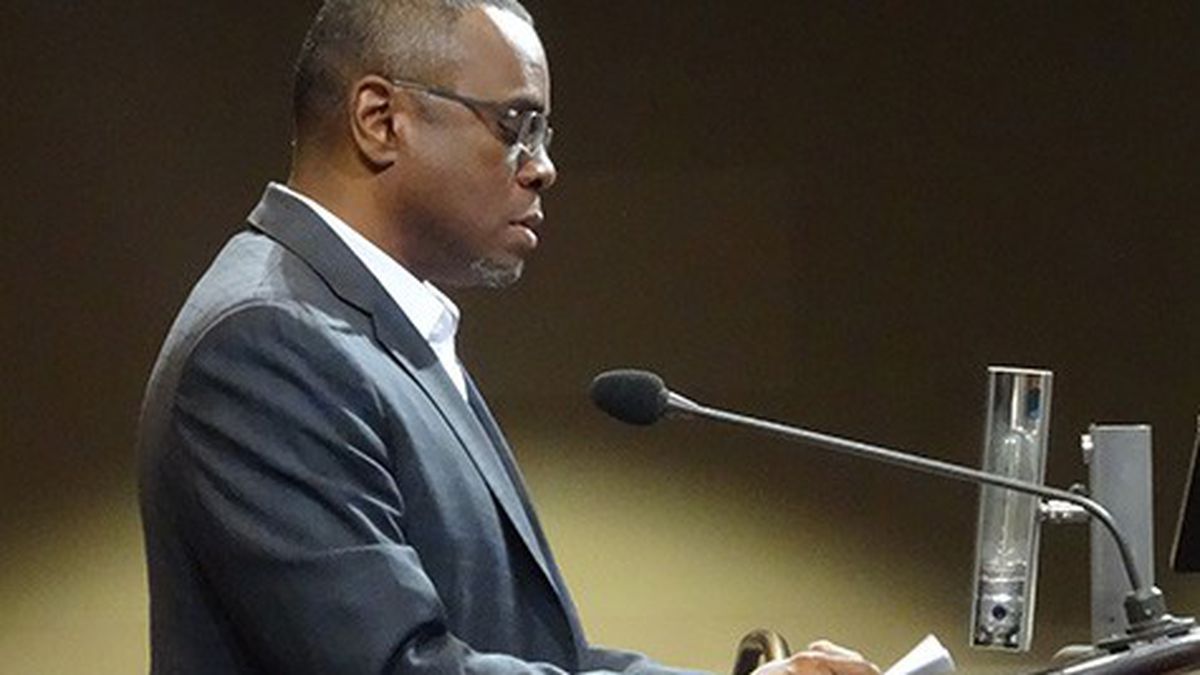 Campaign Contributions from Oakland Luxury Tower Developer May Have Been Illegal

UrbanCore, its lobbyists, and architect donated more than $3,000 to Oakland political candidates while negotiating to buy public land by Lake Merritt — in apparent violation of city law.

UrbanCore CEO Michael Johnson’s proposal to build a luxury apartment tower on city-owned land near Lake Merritt has run up against fierce opposition from neighbors and affordable housing advocates during the past few months. Opponents of the project have packed recent planning commission and city council meetings and implored officials to require that affordable housing be included in the project. Last week, several dozen protesters, who said the sale of public land for luxury apartments will worsen Oakland’s affordable housing crisis, even blocked the intersection of East 12th Street and Lake Merritt Boulevard for an hour, holding aloft banners that read “Public Land for Public Good” and “No to Displacement.”

UrbanCore’s plans also face potential legal problems. As we reported last week (“Oakland Apartment Tower Deal May Be Illegal,” 4/22), the city’s process for selling the publicly owned land at East 12th Street to Johnson appears to be unlawful under the state Surplus Land Act and similar city laws. Earlier this month, at the city council’s Community and Economic Development Committee meeting, Councilmember Abel Guillen threw another wrench into the deal’s gears. Guillen recommended to the committee members that the city conduct an updated appraisal of the parcel, based on his suspicion that the land is worth as much as 25 percent more than the $5.1 million the city is asking.

Yet despite of all these obstacles, most members of the council appear to support the land sale, and have shrugged off the community unrest and possible legal issues. Councilmembers Larry Reid and Lynette Gibson McElhaney shot down Guillen’s recommendation for an updated appraisal, arguing that the city cannot risk scaring other developers away from future deals with the city. The full council is scheduled to vote on the land sale to UrbanCore on May 5, the final step to approve the project.

But there’s at least one more problem with the city’s plan to sell the parcel to UrbanCore. According to public records, UrbanCore’s executives, the company’s lobbyists, and the architect partnering with UrbanCore on the project have all made what appear to have been illegal campaign contributions to Mayor Libby Schaaf, members of the city council, and candidates who ran for mayor and for seats on the city council in the last election.

The Oakland Campaign Reform Act is designed to prevent city contractors from funding the campaigns of politicians who are in a position to award them lucrative contracts. The law bars any city contractor from making a contribution to any candidate or officeholder while negotiations are underway for a contract, and up to 180 days after the completion of any negotiations.

On December 20, 2012, the city issued a private request for proposals to three developers, including UrbanCore, for sale of the East 12th Street parcel. UrbanCore submitted a bid on December 21, 2012, according to planning commission reports. Then on February 2, 2013, UrbanCore submitted a development proposal to the city that called for a year-long term of exclusive negotiations, during which the city would appraise the land and work with UrbanCore to refine its project design. After the city entered into the negotiating agreement with Urban Core, the City Administrator’s Office extended the pact in July 2014 for another six months. It expired in January of this year. UrbanCore is now seeking a disposition and development agreement with the city — the final contract it needs to purchase the land.

Over this same period of time, members of UrbanCore’s project team, and the company’s lobbyists, and its architect, have been making cash contributions to candidates for city office. On June 20, 2013 — after UrbanCore bid on the 12th Street property and before submitting its development proposal to the city — UrbanCore co-founder Theo Oliphant (a former city staffer) made a $700 contribution to candidate Bryan Parker’s mayoral campaign. Ten days after Oliphant’s contribution, Michael Pyatok, UrbanCore’s architect for the tower, gave then Mayor Jean Quan $200 for her reelection committee.

Between July 2, 2013 and January 2, 2015 — the entire eighteen-month period of exclusive negotiating agreement between the city and UrbanCore — the company’s executives and lobbyists made at least eleven campaign contributions to Oakland politicians, public records show.

UrbanCore’s CEO Michael Johnson gave Schaaf $100 on July 27, 2014 — on the same day that he gave Quan’s reelection campaign $250. On October 18, Johnson contributed $100 to Councilmember Rebecca Kaplan’s mayoral campaign committee. Four days later, he donated $100 to Kevin Blackburn, a candidate for Oakland City Council District Two. The 12th Street parcel is located within District Two. Blackburn lost the race to Guillen, and while Guillen is generally supportive of the project, he has asked that UrbanCore provide greater community benefits in return for acquiring the city land and building luxury housing on it.

UrbanCore’s lobbyist Merlin Edwards gave $1,250 to Oakland political candidates during the exclusive negotiating period between the city and UrbanCore. This included a $100 contribution to Kaplan’s mayoral campaign committee, and a $700 check to Kevin Blackburn’s run for city council. Edwards has been a registered lobbyist for UrbanCore since 2012. Edwards is also a lobbyist for Lynn Truong, owner of the Sun Hop Fat Market on East 12th Street. Truong also owns several million dollars worth of real estate within blocks of the East 12th Street parcel, and with the help of Edwards and Michael Johnson of UrbanCore, was responsible for bussing a group of elderly Asian-Americans to a planning commission meeting on April 1 (see “Tricking Immigrant Seniors,” 4/8). Some of the seniors, who don’t speak English, were under the mistaken impression that UrbanCore’s project would include affordable senior housing.

When asked whether the UrbanCore team’s contributions violated the city’s campaign contributions law, representatives of the City Administrator’s Office of Contracts and Compliance declined to comment, referring me instead to the Oakland Public Ethics Commission (PEC). The PEC by policy does not comment on potential violations of Oakland’s ethics rules unless a complaint is filed. Representatives of the City Attorney’s Office did not respond to a request for information regarding Oakland’s campaign contribution limits and the timing of contributions made by the UrbanCore team.

Ralph Kanz, former chair of the Oakland Public Ethics Commission, said city laws restricting campaign contributions are weak and riddled with technicalities that allow both politicians and contractors to violate the spirit of the law. The law needs updating and more rigorous enforcement, he said. “Contractors are required to sign a form and file with the clerk’s office acknowledging that they’re barred from making contributions while seeking a contract with the city,” said Kanz. “But right now it’s a bunch of papers in a file cabinet in the clerk’s office, and it doesn’t do any good in terms of letting the public know any of this is happening.”

It’s also unclear if Oakland’s rules bar contributions from lobbyists who work for contractors seeking city contracts. According to city law, no “individual, proprietorship, firm, partnership, joint venture, syndicate, business, trust, company, corporation, association, committee, and any other organization or group of persons acting in concert,” may make a contribution while seeking a city contract, and up to 180 days afterward. Lobbyists may not fall under this definition, however.

The city’s director of contracts and compliance Deborah Barnes provided the Express with a copy of Michael Johnson’s signed Schedule O form, acknowledging that he is barred from making political contributions while in negotiations with the city for the East 12th Street parcel. Johnson signed the form on September 24, 2013, listing as his business UrbanCore-Integral, LLC. This LLC, however, is no longer vying to purchase the city-owned land, because Johnson’s business partner, Integral Development, LLC, and Atlanta-based company, pulled out of the project last year.

After I asked Schaaf’s office for comment on Johnson’s donation last year to her mayoral committee, Erica Derryck, spokesperson for Schaaf, said, “Now that this has been brought to our attention, the contribution was returned, along with a reminder to the donor of his responsibility to follow the relevant regulations.” Kaplan’s office did not respond to multiple emails and phone calls requesting comment.

In addition to campaign contributions, business and personal ties also link some Oakland officials to UrbanCore and its lobbyists. The nonprofit organization — East Bay Neighborhood Housing Services — run by Oakland City Council President Gibson McElhaney went into business with EM Johnson Interests, Inc., a firm owned by UrbanCore’s Michael Johnson in the mid-2000s to develop housing in Richmond. The venture built 82 homes in the East Hill-Cortez development, 65 of which were sold at market rate.

When she ran for council in 2012, Gibson McElhaney received help from UrbanCore lobbyists Merlin Edwards and Ronnie Turner. In an August 24, 2012 Facebook post about her campaign “kick off” event, Gibson McElhaney called Turner her “dear friend,” and credited him with “stepping up early to not only encourage me to believe that I could make this run.” In the same post, Gibson McElhaney called Edwards her “mentor,” and thanked the UrbanCore lobbyist for “helping me understand my hometown from the inside out and for your steadfast guidance.” Edwards was a host of Gibson McElhaney’s November 2012 victory celebration, and helped her raise funds toward a $55,000 goal. The money was intended to help Gibson McElhaney pay off her personal debt to her campaign committee, according to the councilmember’s Facebook post.

Gibson McElhaney did not respond to a request for comment.

Correction: The original version of this story identified Ralph Kanz as the former president of the Public Ethics Commission. Mr. Kanz was the chair of the PEC.