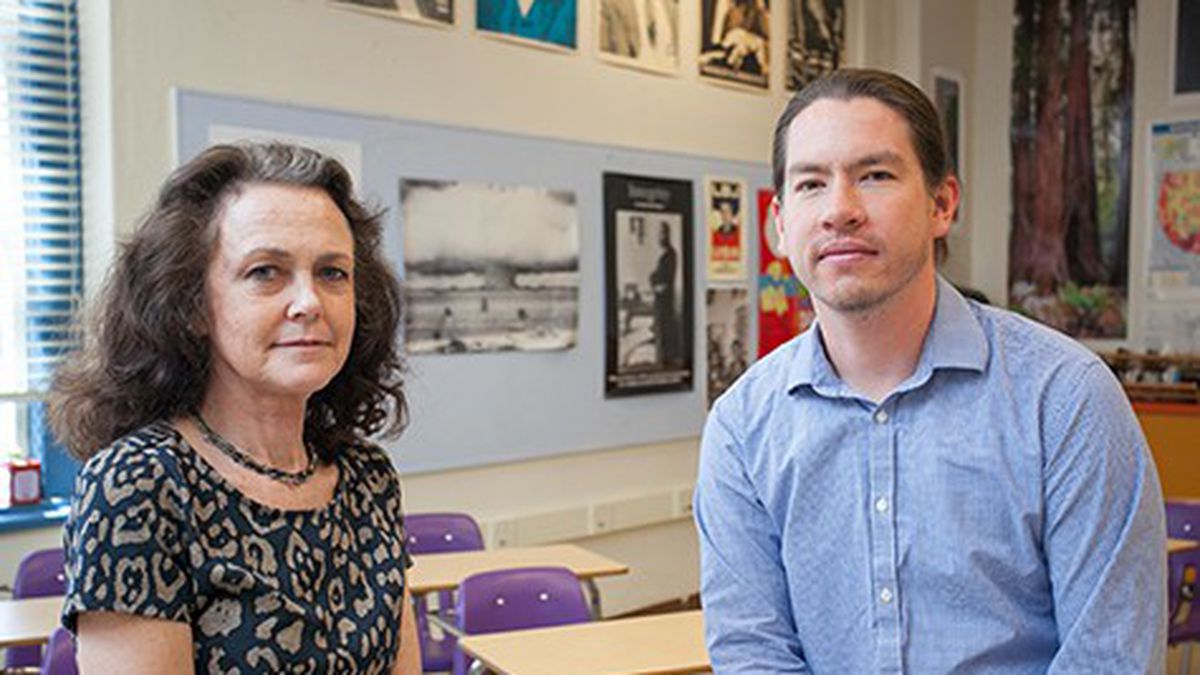 Teachers say that the new test is significantly disrupting class time, is plagued by technical malfunctions, and is an unfair assessment of student performance.

Chaz Garcia’s fourth-grade students spent twelve hours taking standardized tests last week. The teacher at Esperanza Elementary School in the Elmhurst district of East Oakland had anticipated that the Smarter Balanced Assessment Consortium (SBAC), a new state exam tied to federal Common Core standards, might be draining for students. But it was worse than she expected. That’s because her students were taking the test on Chromebooks — new Oakland Unified School District (OUSD) laptop computers that, according to multiple teachers, have been plagued by technical malfunctions before and during the test.

“They are stressed out … and they are discouraged,” Garcia said of her fourth-graders, explaining that one student’s exam essay was completely erased because of a glitch that Garcia couldn’t fix. Others had to restart computers because of various malfunctions, including the failure of audio technology required for certain questions. “These kids are guinea pigs,” she said, adding, “We all know this is not the best use of student time.”

Teachers throughout OUSD said that the SBAC has caused a host of problems for instructors and students, arguing that the district’s implementation of the test — both in terms of scheduling and its technology plan — has been chaotic and needlessly disruptive of class time. For starters, teachers lamented the fact that the district chose to administer the test exclusively on Chromebooks, but did not purchase enough laptops to accommodate all students taking the exam. As a result, schools have had to scramble to share the computers, which means the testing at some sites has gone on for weeks.

Additionally, teachers argued that the test itself has been unnecessarily confusing for students, both in terms of the content of questions and the presentation on Chromebooks. Instructors, in turn, have questioned how well the test measures students’ skills and said that the scores will do little to help teachers develop curricula.

The debate in Oakland comes as teachers and education activists across the country have increasingly scrutinized the controversial tests aligned with the federal Common Core, which aims to establish uniform standards for math and English Language Arts (ELA). Unlike New York and a few other states, California has not seen any large-scale “opt-out” movements, in which parents allow their children to skip Common Core exams in protest of the federal mandates and high-stakes testing. Still, OUSD teachers said there have been growing frustrations about the SBAC this year — some ideological and others related to the logistical nightmare that the test has apparently created.

“The district loves to say that they put students first … but we don’t have enough computers,” said Elizabeth Haugen, who teaches history and literature at Oakland Technical High School in the Temescal district. “And now they are expecting students to pick up the slack when the administration messed up.”

Throughout OUSD, students in third through eighth grade and eleventh grade are taking the SBAC this spring. The state estimates that the math and ELA tests take seven to eight-and-a-half hours total, though the exams are not timed, and Oakland teachers said ongoing tech challenges have made the exams drag on much longer — in some cases twice the state’s estimated timeframe. Oakland schools participated in a “field test” of the SBAC last year — a pilot designed to assist the test’s developers — but this is the first time test scores are being recorded.

The SBAC replaces the pencil-and-paper Standardized Testing and Reporting (STAR) exam and is supposed to provide a more comprehensive assessment of students’ proficiency. Instead of the multiple-choice questions of the STAR, the SBAC requires students to write longer essays and in some cases explain how they got their answers. The test also features “performance tasks,” which are focused on problem-solving and involve a classroom activity. The test is also adaptive, which means questions get harder or easier depending on how students initially perform.

John Krull, OUSD’s information technology officer, said the district currently has 12,000 Chromebooks — about one for every three students — and said district officials divvied up the computers so that every school could complete the SBAC in an efficient manner, over fifteen days, or roughly a three-week period.

The three-to-one student-to-computer ratio, however, means schools can’t have their students take the test simultaneously, which would have allowed them to complete the SBAC in a few days or one week. As a result, the test is disrupting schools for weeks on end, teachers said. This is particularly problematic in high schools, where many classes, such as art or math courses, have students from multiple grades. With eleventh-graders repeatedly missing those courses so they can take the SBAC, teachers end up struggling to move their classes forward.

“It’s taking too much time out of the curriculum,” said Nate Gong, an English and history teacher at Oakland Tech. “I’m excited by digital technology. But with implementing a digital test, there are a whole lot of other things that need to go along with it.” He argued that Oakland Tech does not have enough Chromebooks and that the district has not given schools enough IT resources to handle potential problems with the computers. “There’s not a lot of foresight,” he said.

What’s more, Oakland Tech has scheduled the test in a way that teachers said was inadvertently putting lower-performing students at a disadvantage. After students and teachers in Advanced Placement (AP) classes expressed concerns about having to take the SBAC test just prior to the AP tests, the district decided to allow AP students to take the SBAC at the end of May after they’ve completed the AP exams. The unintended result is that non-AP students have been forced to take the SBAC a month earlier, and thus have had less prep time. “It’s a horrible situation,” said Haugen, who teaches two AP courses. “The AP kids have more instruction before they test than the non-AP students. It’s the exact opposite of equity.”

Beyond concerns around the administrative challenges of testing in shifts, teachers said that students were having trouble navigating the exam on Chromebooks. Marisa Villegas, a sixth-grade humanities teacher at Melrose Leadership Academy in the Maxwell Park neighborhood of East Oakland, said the laptop screens presented text in a way that made it difficult for students to distinguish where test instructions ended and readings began, for example. “The kids are so bogged down trying to figure out what the test is asking them to do,” she said. “Students who are very strong academically are saying, ‘I don’t get this.'”

Villegas said she supports a shift away from traditional multiple-choice tests toward more holistic evaluations, but said the exam seems too intensive and confusing — and thus doesn’t provide a meaningful assessment of academic performance. And if the SBAC fails to offer useful measures of students’ skills, it clearly does more harm than good, she argued. “It was a really big stress for them,” she said of her class. “It was very hard to see my students go through it and feel like I couldn’t do anything.”

Last week, in OUSD and in schools across the state, officials were also unable to log on to computers that were supposed to administer the SBAC due to problems with the state’s servers, according to Krull, OUSD’s IT officer, who said this tech malfunction caused interruptions and confusion during testing. A California Department of Education spokesperson told me there were “minor delays” due to a software update, but Oakland teachers said the errors made the testing process more time-consuming and stressful.

Still, Krull said the implementation of the computerized test has been successful, arguing that there’s a learning curve with new technology. But he acknowledged that he has fielded complaints about the text on the Chromebooks not displaying properly on certain questions. And he said he understands how answering certain math questions on a computer — such as ones in which students have to write out fractions — might be confusing.

“It’s just this brand new platform,” he said, adding that he expects teachers to increasingly integrate Chromebooks into curricula next year, which should help students become more comfortable with them. In terms of the SBAC rollout, he added, “We worked through a lot of the glitches last year. This year it’s been pretty darn smooth.”

Ramona Burton, OUSD’s director of state and local assessment, said Oakland was once very far behind other districts in terms of tech infrastructure, but has come a long way during the past year, in large part by aggressively purchasing Chromebooks. And in many ways, the testing conditions and associated concerns haven’t changed since STAR, she said. “It’s the first time, and there’s a lot of anxiety. And people are thinking of this as so different, but it really isn’t,” she said. “The tests will become more stable over time. Kids will do better and adults will understand how to do this better.”