What's supposed to be a funny play about a serious subject comes uncomfortably close to outright moralizing. 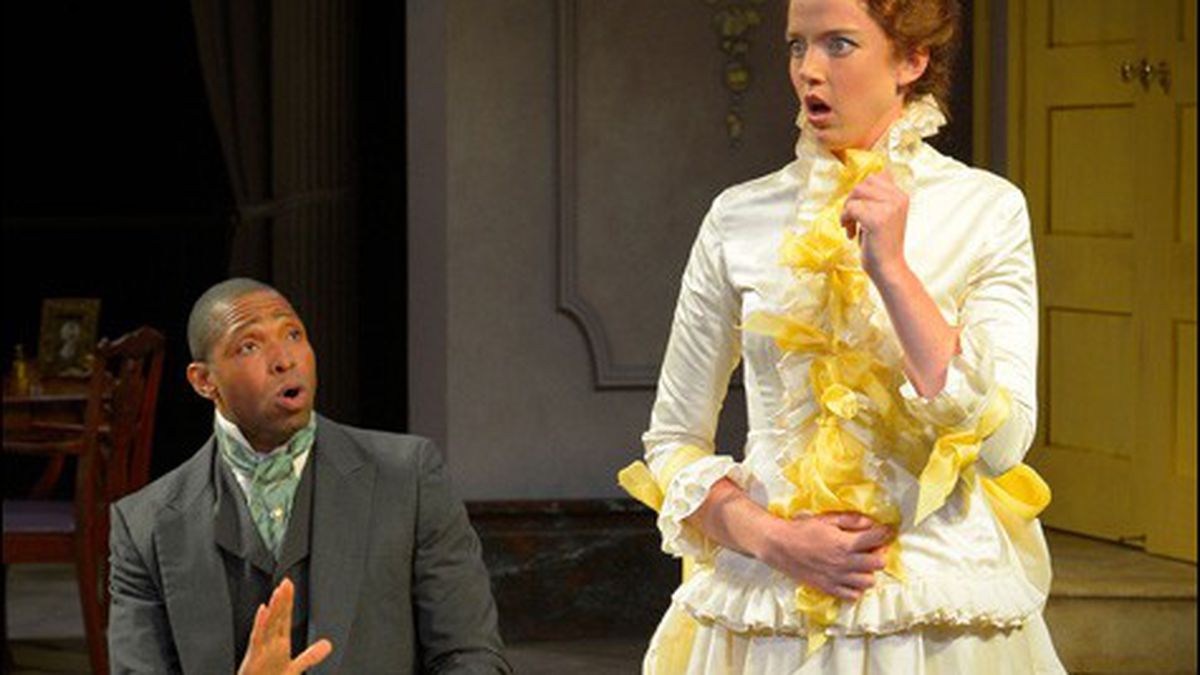 One line in particular escaped Lady Windermere’s Fan, Oscar Wilde’s early comedy, and managed to attain notoriety in itself: “We are all in the gutter, but some of us are looking at the stars.” Trivia buffs who are familiar with the phrase out of context may be led astray by its apparently idealistic swell. In the play, the line is immediately met by jeers and ridicule for its highfalutin romanticism.

The play, a satire of the threadbare Victorian marriage contract, returns again and again to this battle of earnest idealism versus disillusioned realism — the latter of which takes the form of flippant aestheticism, this being Wilde. “It is absurd to divide people into good and bad. People are either charming or tedious,” says one character, trying to coax a married woman to infidelity. Of course, only the men can really afford to take such a frank attitude with impunity, and it is this double standard that brings the central character, Lady Windermere, from spotless Puritanism to the brink of ruin.

But there is another reason Wilde’s characters obsess so much over the dreaded “tediousness”: The playwright himself seems uneasy about how serious to make this play — an intended comedy, but by all means one with a substantial core. Director Christopher Liam Moore evidently inherits Wilde’s quandary, but fails to heed his characters’ reminders. With a few exceptions, the characters in this production, now at Cal Shakes, are either far too silly or, worse, much too serious.

The story begins when society gossip the Duchess of Berwick (played by Danny Scheie in a spirited drag performance) passes a devastating rumor along to the young, naive Lady Windermere (Emily Kitchens): that Lord Windermere, her husband of just two years, has been paying large sums of money to one Mrs. Erlynne (Stacy Ross), a fallen woman with a reputation of scandalous proportions — “infamy to meet, degradation to know,” as the Duchess frames her. Lady Windermere confronts her husband (Aldo Billingslea), who is disturbed by her discovery but maintains that his relationship with Erlynne is not a sexual one and goes so far as to insist that Erlynne be invited to his wife’s birthday ball. The audience then discovers a surprising truth about Erlynne’s identity that Lady Windermere does not, and so her belief in the sanctity of marriage remains shattered. In this state, Lady Windermere decides to heed the love call of a forward admirer, Lord Darlington (Nick Gabriel), but Erlynne stops her from consummating the mistake. Thus, Erlynne earns Lady Windermere’s understanding and perhaps even esteem — though her true, tragic identity remains unknown to the title character.

To be sure, this structure necessitates several sharp turns from the funny to the tragic. We chuckle at the contradictions of Victorian society, which Wilde’s wit so singularly exposes, and then we gasp at this society’s ability to so utterly devastate a woman — to make someone as good-hearted as Mrs. Erlynne into a pariah. A good production has to make these turns nimbly, keeping the consuming specter of morality at bay from what is, after all, supposed to be a comedy.

No such luck here, particularly after intermission. Kitchens gives a distractingly overwrought performance as the central character, and, perhaps in consequence, those closest to her seem compelled toward melodrama. Billingslea, as Lord Windermere, instantly takes such a fatherly rapport with her that it becomes impossible to ever see him as the jealous, sexually possessive husband that the play’s second half requires him to be. Ross, for her part, interrupts an otherwise excellent performance as Mrs. Erlynne with several too-deep plunges into emotion, choking up over lines about God’s judgment and deeply piercing Wilde’s comedic veil.

In consequence, the production tends to be best at its peripheries, which come to offer relief. The circling gossips and gaggle of effete husbands, through whom Wilde delivers the bulk of his signature quips and ironic double talk, are perhaps enough to make the play worth seeing. In particular, Nick Gabriel as Lord Darlington exemplifies the nimbleness required by the play: he slides frictionlessly from devious aesthete to head-over-heels romantic (indeed, it is Darlington who speaks the “we are all in the gutter” line). James Carpenter, for his part, repeatedly kicks this comedy back into a form of such with his portrayal of Lord Augustus, the hapless, slightly dense old-timer with a schoolboy crush on Mrs. Erlynne. In a production that comes uncomfortably close to outright moralizing, someone has to provide the charm.