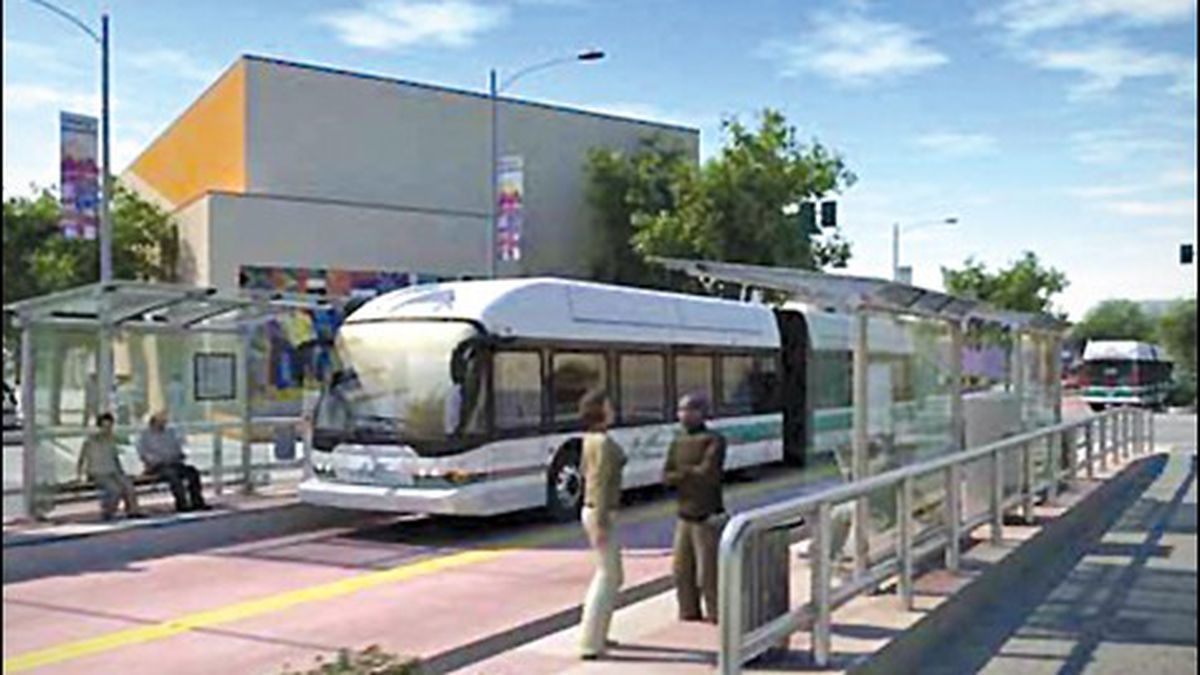 Bus Rapid Transit Is Not a Done Deal

AC Transit’s scaled-down Bus Rapid Transit project got the go-ahead from the district’s board of directors late last month, but the ambitious proposal may see further proposed modifications when it comes before the Oakland City Council for approval in June. In addition, BRT may face a possible federal challenge on disability and elderly discrimination grounds from a powerful East Oakland church if requested changes are not made to the portions of the line nearest to the San Leandro border.

Fourteen years in the planning, BRT was originally proposed to serve as a light-rail-type bus line running on dedicated, bus-only center lane tracks between downtown Berkeley and downtown San Leandro on the Telegraph Avenue and International Boulevard/E. 14th Street corridors. The Berkeley portion of the line was eliminated two years ago when objections by Telegraph Avenue area residents and merchants caused the Berkeley City Council to reject the project. And the northern spur of the line from downtown Oakland to the Berkeley border was killed when the AC Transit Board of Directors unanimously approved the project in April.

Both the Oakland and San Leandro city councils must still vote to allow the BRT project to move forward. Cutting off the Telegraph Avenue portion of the project — which had caused the most concerns when Oakland City Council gave preliminary approval to BRT two years ago — certainly increased the odds that Oakland will give the final green light. And at least two Oakland councilwomen — Desley Brooks and Rebecca Kaplan — made favorable comments about the BRT proposal in interviews last week.

Kaplan, who gained familiarity with the BRT proposal during six years as a member of the AC Transit Board of Directors, said that the Oakland City Council has the upper hand in what she called any possible requests to modify the BRT proposal, which she said “has the capacity to be a spectacular project.”

Assuming the council gives approval for AC Transit to move forward with BRT at next month’s meeting, Kaplan said, “we will probably pass it giving AC Transit ‘direction'” for possible modifications. The transit district “must come back to us to get approval for any actual construction to take place,” she noted.

She added that “we’ve been continuing to build a dialogue” between AC Transit and Oakland officials on the BRT project, and she does not anticipate major difficulties in working out any possible problems between the city and the agency. “What people have been asking for [so far] seems perfectly reasonable,” she said.

But Reverend Daniel Buford, director of Allen Temple Baptist Church’s Prophetic Justice Ministry, is not so optimistic, and said he and others with Deep East Oakland interests will attend the Oakland City Hall meeting to voice their concerns. “I’m upset,” Buford said in an interview. “I held my fire until the meeting [at Allen Temple Arms in March]. That was the litmus test. Until then, I thought [AC Transit was] listening to us. It was at the meeting that I found out that they were basically giving us the okey-doke. They don’t give a damn about us.”

The meeting Buford was referring to was a contentious March 12 community meeting at Allen Temple’s senior-citizen residential facility at 82nd and International, in which AC Transit officials explained BRT to local residents and asked for their comments and concerns. Close to one hundred people attended, by far the largest of seven BRT community meetings held late last winter.

Buford’s BRT complaints involve a 22-block stretch of International between 73rd and 105th avenues. Along with the church itself, Allen Temple operates seven facilities in that area, including two senior citizen facilities and a health clinic, all of which cater heavily to either seniors or people with disabilities, or both.

Buford is opposed to speeding up bus traffic in the area, saying that it is already a “speeding zone” that is dangerous to pedestrians. He is also opposed to reducing auto traffic to one lane in front of Allen Temple Arms between 81st and 82nd avenues, as BRT proposes, saying that the lane would be blocked two to three times a week by medical emergency vehicles that are regularly called to the senior residence there. And, finally, the minister is opposed to the proposed elimination of several bus stops in the area. AC Transit proposes installing seven BRT stations between 73rd and 104th, a significant reduction from the twelve bus stops in the same area currently operating on the No. 1 bus line. Under the AC Transit proposal, BRT would replace portions of the 1 and 1R lines operating east of Lake Merritt in Oakland.

Buford also said he would prefer that BRT run along the curbside lane in Deep East Oakland as opposed to a bus-only center lane, and says he was disturbed that AC Transit officials did not initially present that alternative when presenting the BRT plan at the March 12 Allen Temple Arms meeting. “It took some people from outside the community, from Berkeley and San Leandro, to speak up at the meeting and tell us that there was another way to do it,” Buford said.

Buford said that if the Oakland City Council does not modify the BRT proposal, “I am willing to pursue federal action” on the grounds of discrimination against disabled citizens.

Pressure to either modify or even vote down BRT could be especially heavy on Oakland City Council President Larry Reid, who represents the 73rd-to-105th corridor. Reid also has expressed concerns about BRT in the past.

Another Oakland councilmember who may insist on modifications to the BRT plan is Fruitvale-area representative Ignacio De La Fuente. AC Transit has proposed a number of mitigations to moderate the effect of BRT’s auto lane and parking-space reduction in what AC Transit board member Joel Young called the Fruitvale “chokepoint.” One such change proposed by AC Transit involves extensive street reconstruction to make it easier to cross over Fruitvale Avenue between East 12th Street and San Leandro Street, one of the most congested and difficult intersections to navigate during rush-hour traffic. But De La Fuente, who may face a stiff re-election challenge this November from veteran Oakland school board member Noel Gallo, may insist on more changes if Fruitvale residents and merchants demand it. Neither Reid nor De La Fuente answered requests for comment on this story.

Desley Brooks, who represents the East Oakland Council district between De La Fuente’s and Reid’s, praised the BRT project in an interview last week, saying that “International Boulevard is in dire need of a facelift” and that, with the elimination of redevelopment money by Governor Jerry Brown, the BRT proposal is the only way that it can get the funds necessary to do the work. She also said that construction of the BRT street modifications and stations would provide needed jobs in the area, adding that “we need to make sure” that many of those jobs are filled by “local people.”

Brooks said that, early in the process, “I made sure I raised the concerns of my community about the BRT project to AC Transit officials.” “They were addressed by AC Transit,” she said, noting that during a February AC Transit/BRT community meeting in her district, “there were no additional concerns voiced.” Brooks added that she understood “there are still some issues in Larry [Reid]’s district,” and did not commit herself to how she would ultimately vote.