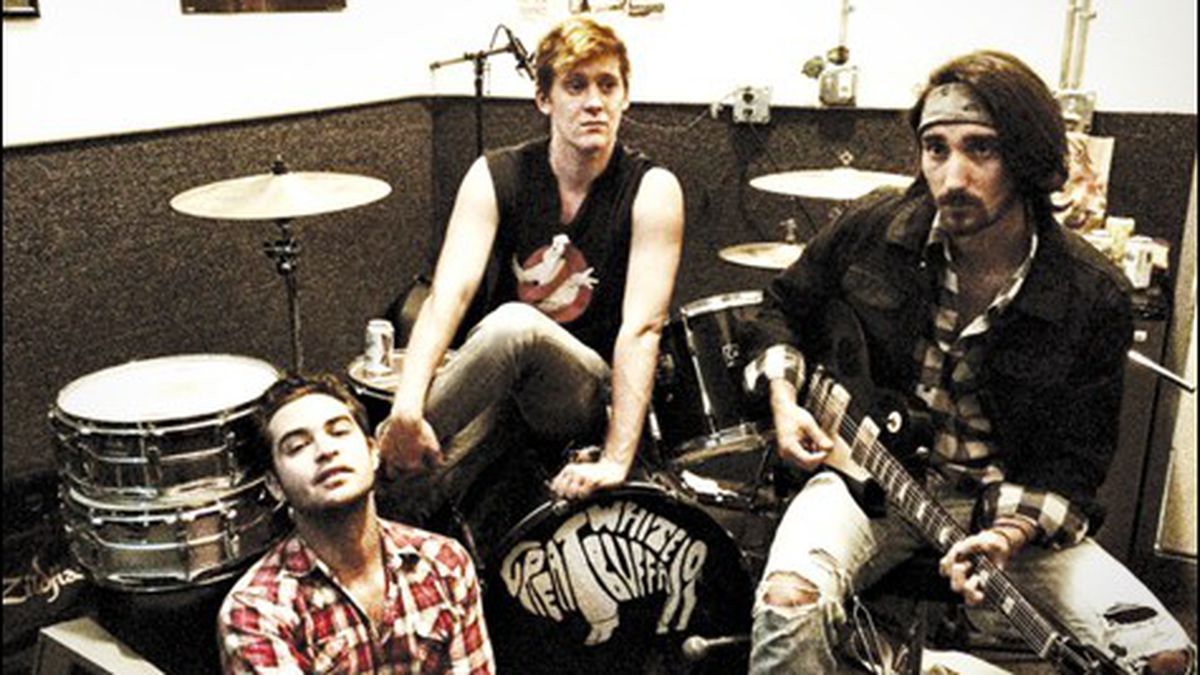 An Orinda band finds success in LA, and an ardent following in the Bay Area.

The four members of Great White Buffalo ambled into Thee Parkside last Thursday, a few hours before their headlining show down the street at Bottom of the Hill. After trying to order drinks and hamburgers in the mostly empty, pre-happy hour bar and complaining about the surly dude in the kitchen, the up-and-coming rock ‘n’ rollers dug into their French fries and launched a frenetic discussion about their music, time-traveling, and jacuzzis, among other things.

It’s been a big couple months for the members of Great White Buffalo. They just finished a new EP, which was engineered by Phil Allen, who recently won a Grammy for his work on Adele’s 21. (GWB’s singer and rhythm guitarist Graham Bockmiller went to college with Allen, who works at a studio down the street from his apartment in West Hollywood.) Last month, the band got extra exposure thanks to an appearance on Spinner, an AOL music blog.

That was an adrenaline shot for the two founding members, Stephen Johnson and Bockmiller, who both grew up in Orinda and relocated to Los Angeles. Though they were raised in the same town, Bockmiller and Johnson didn’t know each other that well until forming Great White Buffalo about two and a half years ago. At that time, it consisted entirely of Orindans, all of them alumni of Miramonte High School. Eventually they replaced original drummer Russ Hardy with Angelino Rich Carrillo, who showed up to meet the band on a motorcycle. Johnson joked that Carrillo looked so cool rolling up on his vintage Honda that he wasn’t sure if he wanted Carrillo in the band, or if he wanted to date him.

Original bassist Colin Regan left earlier this year, and now Blake La Grange, an audio engineer who recorded the band’s original EP, plays bass with them live; with his long curly hair, La Grange is an obvious, albeit hipper, doppelgänger for Blake on the TV show Workaholics, a fact he unhappily acknowledges. Judging by the band members’ conversations, it’s easy to tell they’ve spent a lot of time together. Their rapid-fire back-and-forth isn’t as much a finishing of each other’s sentences as it is a series of interruptions. More importantly, they know how to banter. Asked how the group came up with its name, Johnson replied, “We kicked around a bunch of names in the beginning. Graham’s sister suggested [Great White Buffalo]; she did not tell us it was in Hot Tub Time Machine.”

Besides their easy rapport, the guys are also a solid, well-rehearsed rock band. Their music is crisp, tight, and consistently catchy. At Thursday’s show, Great White Buffalo cranked out an hour-long set that could garner comparisons to a variety of hugely successful modern rockers: Kings of Leon, The Strokes, and Foo Fighters, for starters. Bockmiller sings in an oddly soothing baritone that the band’s press materials described as “aching.” I would go further and say his voice and lyrics have a late-night, drunken, half-asleep, melancholy quality that seems to be constantly yearning for something better.

The whole band plays hard, sincerely, and convincingly. The songs are concise, but the quartet knows when to kick up the volume and distortion before a tune becomes monotonous. After a few numbers, a bunch of girls started dancing in front of the stage. They didn’t stop until the show ended.

Johnson is probably the most fun to watch. He simply looks like the lead guitarist in a rock ‘n’ roll band. He’s tall and lanky. He has shaggy brown hair and an unkempt beard. He’s clearly having fun, and he never stops boogying around the stage, even though he has a torn ACL, which will consign the band to the recording studio for most of August. On one song he played a quick solo using a beer bottle as a slide. On another, a new tune called “Sinking In,” he laid on spacious layering reminiscent of old-school U2.

At this point, Great White Buffalo is definitely considered a Los Angeles band, which some people might find offensive, even though they shouldn’t. These guys look like a band you would see playing an arena, and that’s not a bad thing. They played a legit cover of The Strokes’ “Hard to Explain.” And they owned a slow, dirty version of Queens of the Stone Age’s “Make It Wit Chu” that beat the snot out of the original. La Grange only learned the song that day, he said, but he still managed to work in some of his best fills of the show.

Bockmiller and Johnson say they are still single, defying expectations and providing a small glimmer of hope for the women who trailed them in hot pursuit. Johnson had to keep moving when he strutted across the club, because every time he planted his feet, he was basically accosted by fans.

To be honest, though, who could blame them?