Broadway Shuttle to Extend Service to 1 a.m. on Weekends

Lazy people of Oakland, rejoice! The Broadway Shuttle — those free lime-green buses that run from Jack London to Uptown from 7 a.m.- 7p.m. during the week — will begin rolling out later service on Friday and Saturday nights starting in July, per the service’s Twitter feed. The shuttle — which started running last summer and which gets its funding from various city sources as well as a $1 million grant from the Bay Area Air Quality Management District — has been rumored to be seeking funding for later service for awhile, the idea being that later service could potentially drum up major business for bars and restaurants along the Broadway corridor. A post- 5 p.m. phone call to the project’s manager wasn’t immediately returned, and the service’s Twitter feed implores us to “stay tuned for more details.”

Update, 7 p.m.: According to aforementioned project manager Zach Seal, the shuttle will run about once every fifteen minutes, from 7 a.m.-1 a.m. on Fridays and 6 p.m.-1 a.m. on Saturdays. The night route will differ slightly from the daytime route in that instead of running straight up Broadway and stopping at Grand Avenue, it’ll turn onto Telegraph at 15th, run up Telegraph past Rudy’s Can’t Fail Cafe and the Fox Theater, turn back onto Broadway at 20th, and go all the way up to 27th Street. According again to Seal, the service extension is being covered by a grant from the Alameda County Transportation Commission’s Transportation Fund for Clean Air and will cost about $200,000 annually. 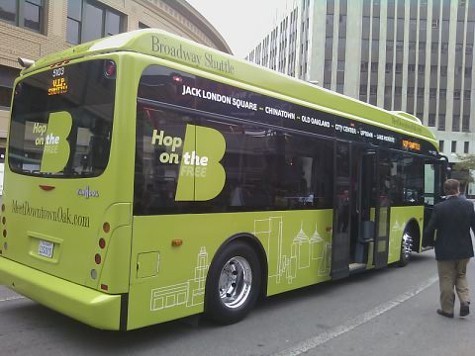