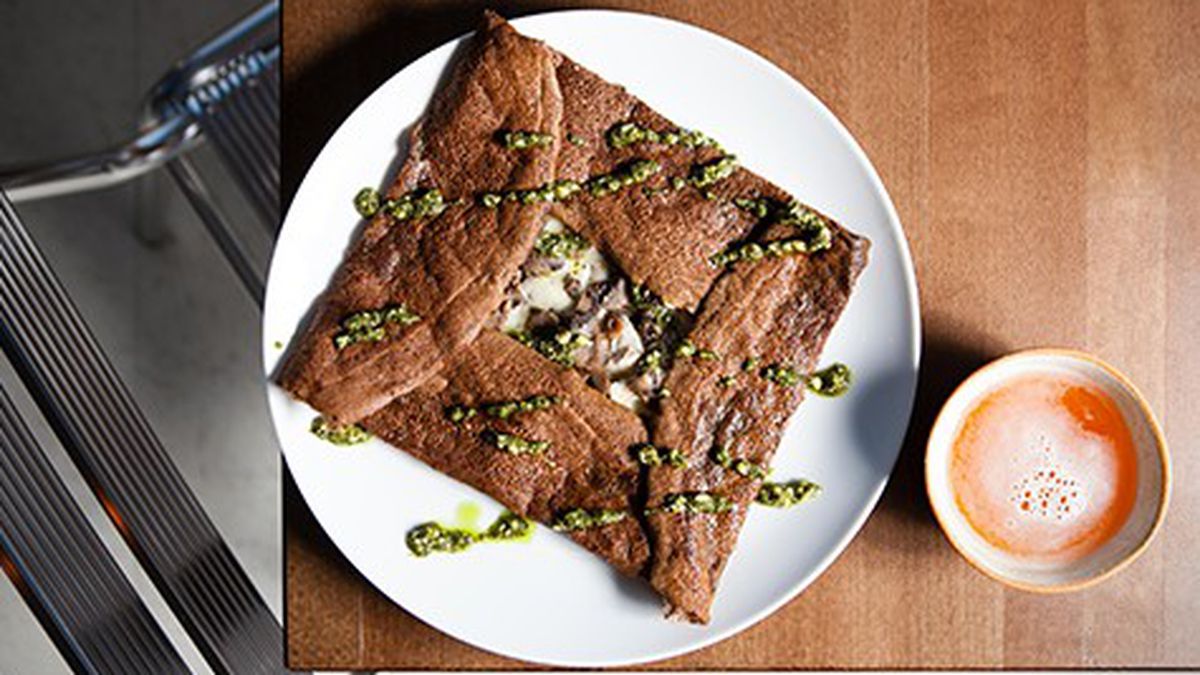 Brittany Crepes Brings a Slice of France to West Berkeley

The crepe of things to come.

It’s standard order for French restaurants in the United States to fashion themselves after the kind of place you might find in France — say, that little bistro you remember from your vacation in Paris all those years ago. Brittany Crepes, a new creperie in West Berkeley, checks off more boxes than most. There is, of course, the misty-eyed accordion music and the flower-lined faux balcony. The walls are painted in that particular shade of baby blue. And during my visits, I seemed to be the only person in the room who wasn’t speaking French.

All in all, it’s not quite what you might expect to find at a place that sits next to a copy store and a real estate office in a no-man’s-land stretch of University Avenue, halfway between the posh boutiques of Fourth Street and the hub of diverse restaurants clustered around San Pablo Avenue. The restaurant sits in the space formerly occupied by Wrap N Roll, a quick-service lunch spot known for its gyros and kathi rolls, but I barely recognized it.

Mainly, though, it’s the food that will transport diners to the northwestern coast of France — to the small village of Arradon, where husband-and-wife co-owners Laurent and Carole Le Barbier lived before moving to the United States twenty years ago. In 2006, the couple opened Brittany Crepes as a mobile food and catering business that has since become a fixture at Bay Area farmers’ markets, but their cozy Berkeley storefront — for now, only open for dinner — is their first brick-and-mortar restaurant.

Most of the other creperies I’ve encountered in the Bay Area have chosen to go the Cal-fusion route, committing the same kinds of atrocities that, say, California Pizza Kitchen has been inflicting on thin-crust pizza for years. Grilled tofu crepe, anyone? There is (maybe) a time and a place for that kind of thing. After all, as Laurent, the main chef, explained, even in France there aren’t really any rules when it comes to crepes. When he was growing up, his parents and grandparents would fill the buckwheat galettes they made at home with whatever leftovers they had on hand. Any kind of meat or fish would do.

But by and large, Brittany Crepes sticks to the ingredients you’d find at a traditional creperie in Brittany. Start with the batter itself, which for the galettes, or savory crepes, is made with a buckwheat flour batter that is characteristic of the Breton style — it’s both dairy- and gluten-free, Laurent noted. The buckwheat batter yields a heartier, slightly nuttier flavor than a wheat-flour crepe, and each brown pancake is served folded at the edges to form a kind of square-shaped envelope, with the center open so you can see the filling. The galette filled with ham and melted Emmentaler cheese was one of those quintessential French meals: simple but very satisfying. Get it topped with a fried egg to make it a “complète.” During another visit, I was in the mood for something a little bit more elaborate, so I ordered the L’Armoricaine, which was topped with sautéed sea scallops and leeks that had cooked slowly in butter until they were soft — another classic French combination. The deeply savory leeks were a great complement to the mild ocean funk of the shellfish.

And my favorite galette, La Campagnarde, was filled with chicken, mushrooms, cheese, and a basil pesto — the one less obviously French ingredient (though, of course, what the French call pistou is a popular condiment in southern France). I liked this one best because the pesto added an extra element of savoriness and moisture, because, if the galettes at Brittany Crepes have a flaw, it’s that they tend to be a bit dry — probably a result of the cook’s tendency to put a lot less butter on the griddle than they do in France. Laurent doesn’t use butter at all at his farmers’ market stands in an effort to appeal to health-conscious Californians. But he said customers at the restaurant, which he wanted to be more traditionally French, can always ask for more. Next time, I will.

Otherwise, everything about the place is about as French as it gets — not just the ambience and decor, but also the Krampouz heavy-duty cast-iron crepe griddles that just about every serious creperie in France has, and the wide ceramic bowls, or bolées, that are used to serve good French cider — the traditional beverage to accompany a meal of galettes and crepes.

In addition to the galettes, Brittany Crepes offers a very concise menu of other savory options, the highlight of which is a charcuterie board that includes some excellent duck rillettes and pate de campagne made by Fabrique Delices, a Hayward-based company.

I wish I could say the same about the two soups that I tried, both of which were vegetarian. The vegetable soup du jour is always some kind of vegetable purée (of leeks or broccoli, for instance), but on the night I ordered it, it tasted more like a lightly flavored onion water — severely undersalted and served scalding hot, so I couldn’t even slurp it down quickly and move on. The French onion soup, on the other hand, arrived at the table lukewarm. This was presented in the traditional way, topped with a thick slice of baguette and a metric ton of stretchy, partially-browned Emmentaler cheese, but there was no savory element to balance the overwhelming sweetness of the caramelized onion base. A hearty beef broth — or, at the very least, a big pinch of salt — would have helped.

Seasoning issues aside, it’s nice to have a place where you can enjoy this kind of simple, unpretentious French meal. And of course, at any creperie worth its salt — or, ahem, sugar — you wouldn’t even think to skip dessert. The sweet crepes are made with a flour batter and are more akin to what most Americans know and recognize as a crepe — very thin and tender on the inside, with curled edges that offer a hint of crispness. The more elaborate dessert combinations, filled with caramelized apples and such, will fight for your attention. But you can’t go wrong with the simple butter-and-sugar Bretonne, with an optional squeeze of lemon juice. It makes for the perfect sweet ending to the meal, especially if you wash it down with one of the restaurant’s well-pulled espressos — another real rarity as far as Bay Area restaurants go.

Even viewed in the most optimistic light, Brittany Crepes’ location is less than ideal. The recent spate of wet, chilly weather probably didn’t help, but during my visits there was no foot traffic to speak of, and most cars zoomed right past en route to the Interstate 80 onramp.

Still, despite the glum optics of a mostly empty dining room, it’s easy to imagine how the place might grow into the kind of bustling French cafe that East Bay Francophiles have been waiting for. After all, readers are always asking me to recommend a place where they might sit down and share a dessert in the evening, after all the bakeries and coffee shops have closed. Why couldn’t Brittany Crepes be that place? Especially with its aura of romance — the candles and fresh flowers at every table, the sound of French being spoken all around you. For now, anyway, the place still feels like an undiscovered secret.