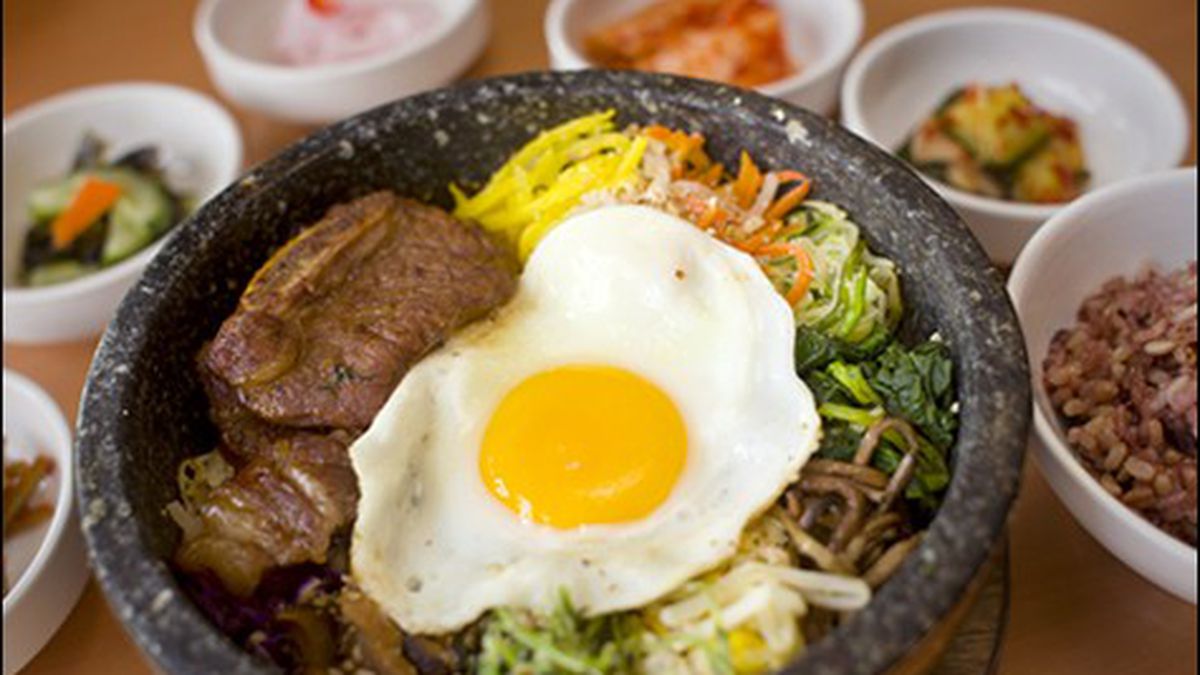 Albany restaurant takes the intimidation factor out of Korean cuisine.

Moments before delivering your entrée amid Bowl’d‘s mildly hipsterish moss-greens and dark wood-grain browns, your server sets out across your table, from left to right, a series of tiny flat-bottomed bowls containing sesame-oil-bathed bean sprouts (kongnamul), seaweed salad (miyeok muchim), sweet pickled radish (muchaei), julienned potato, fresh kimchi, chili-peppered chewy white fish cakes, and jalapeño-tangled dried anchovies, heads and all. If you’ve identified yourself as a vegan or vegetarian, you’ll get garlicky spinach and chopped-tofu salad instead of the fish and the kimchi, which is made with infinitesimal, needle-size shrimp.

If you have any history with Korean food, you’ll know that these morsels are called banchan and that they’re meant to be eaten bit by bit throughout the meal.

But let’s face it: Shockingly few diners in this country have any history with Korean food. 7-11 sells sushi. Jack in the Box offers egg rolls. Yet Korean food remains remote, the Pluto of Asian cuisines in America.

Jessica Oh wants to change that, which is why she likes to tell non-Korean diners at Bowl’d — which she opened last month with co-owner Chi Moon — to treat banchan “like fries with a burger.”

Oh was raised in the Bay Area by Korean-bred parents who owned several restaurants, including Oakland’s Ohgane. “I love Korean food,” she said. “It speaks for itself. It’s perfect for herbivores and for people who like meat, but because it hasn’t been introduced to Americans in the right way, many people are hesitant to try it, even though it’s made of such familiar stuff.”

When she and Moon decided to open a restaurant, one of their main goals was to demystify Korean food for non-Koreans. “Why not introduce Korean food without being intimidating? To do that, you need a clearly written English menu and more Americanized service.”

They called the place Bowl’d “because it means you’re bold to try something new.” It also alludes to the vessel in which most of Bowl’d’s sumptuous, satisfying, sophisticatedly spiced, and strikingly beautiful fare is served — from classic, kaleidoscopic bibimbap to chewy jhap chae noodles (snipped tableside with huge scissors, per tradition) to an array of stews featuring seafood, tofu, beef brisket, kimchi, and whole date/chestnut/ginseng/sticky-rice-stuffed chickens.

These stews, like much else at Bowl’d, can be tailored to suit personal preference. “The great thing about Korean food is that it’s all about choices. Koreans like to have a lot of options along with their rice,” Oh said.

So her customers customize. The crimped white wrappers of pot-stickerish mondoo dumplings can be stuffed with finely chopped and gently spiced shrimp, kimchi, vegetables, or beef, and can be either lightly pan-fried or steamed to delicate melt-in-your-mouthiness. Kimchi fried rice, more intense but less oily than its Chinese counterpart, can be made either spicy or mild; $2 more buys a bacon boost.

Bacon also features, along with almonds and rice, in falafel-esque marinated-tofu pockets whose sophisticated sweetness makes one wish they were more cohesive and easier to eat — as are Bowl’d’s vegetarian rice buns, which aren’t buns at all but tangy, tangerine-size sticky-rice balls reminiscent of Italian arancini, rolled in roasted-seaweed shards.

Justifiably one of Korea’s most popular dishes, bibimbap is itself an exercise in options. Handfuls of spinach, seaweed, mushrooms, carrot, scallions, bean sprouts, pickled vegetables, fried egg, and meat (only if you want egg and meat) artfully array your choice of porcelain bowl or sizzling-hot stoneware dolsot pot; rice (white or “mixed,” containing millet and other grains) fills another. Sauce choices include spicy gojuchang or mild citrus-soy. Your average non-Korean has no idea what to do with all of this — and, if you’re familiar with other Asian cuisines, the correct procedure feels anathema: To the rice, add however much you like of whichever components you like. Stir until well-mixed. Eat slowly with a shallow stainless-steel spoon. “Koreans don’t like to eat in a hurry,” Oh said.

Bibimbap is infinitely customizable comfort food, and Korean-style comfort can be tongue-searingly spicy. Served in a helmet-size, too-hot-to-touch dolsot brimming with cinnabar broth, stretchy clear sweet-potato noodles, chewy rice-cake “petals,” onions, beef bits, and a Sargasso Sea of fiery fermented cabbage, Bowl’d’s kimchi stew offers an incendiary, intimate embrace, asking only — as your face flushes and your eyes stream — that you submit. (Kimchi is prepared fresh daily at Bowl’d.) For a deeply satisfying and optionally red-hot protein fix, soft-tofu stew can be made spicy, mild, or the ambiguous “non-spicy,” stocked with seafood, meats, vegetables, bean paste, and/or kimchi — along with an optional raw egg that cooks after you stir it in.

Although Oh calls Bowl’d’s fare “traditionally Korean, not fusion at all,” the restaurant occasionally darts off the classic path — with a giant jokey fork, spoon, knife, and spatula mounted on one wall; buckwheat soba noodles available instead of rice with bibimbap; an all-organic bibimbap option; and (alongside fleshy faves such as Korean barbecue and pear-fringed beef tartare) a wealth of meatless options. Even when ordering most standard items, just announce that you shun flesh: Arrangements will be made.