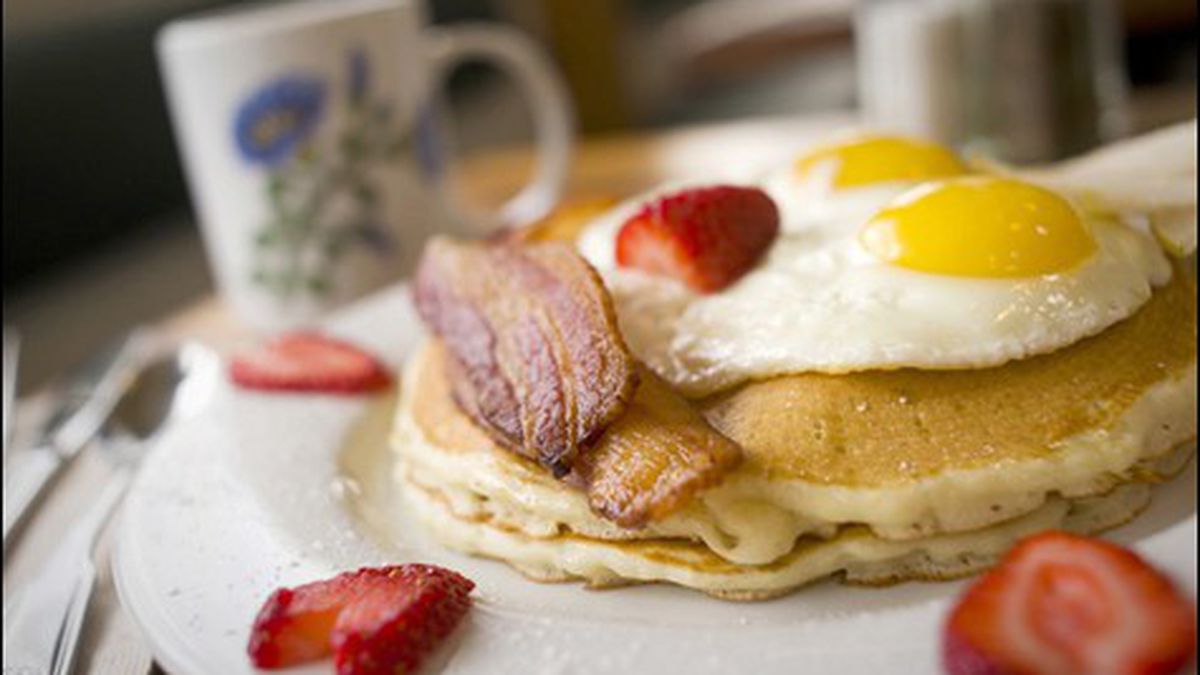 Boffo, a Crossfit in Progress

At Sam's Log Cabin, chef-owner Rhasaan Fernandez blurs the line between a neighborhood diner and innovative side projects.

Rhasaan Fernandez is tall and rangy, with dark, heavy-lidded eyes that look perpetually sleepy, and with good reason. These days the 32-year-old chef is busy, even by the twelve-hour workday standards of his profession.

A year ago Fernandez became chef-owner of Sam’s Log Cabin, Albany’s well-worn diner. At the same time, Fernandez rolled out Boffo Cart, a street-food offshoot that isn’t actually a cart (that “rolling out”: purely metaphorical). On Wednesdays — the day of the Albany Farmers’ Market — Fernandez is on his feet from five in the morning till nine at night, back-to-backing for another early-morning start on Thursday.

That kind of stamina is only the beginning of what Fernandez faces, if you can believe the pending projects he ticks off in a rundown of future plans. Tally up the modest tweaks he has made to Sam’s so far, add them to the necessarily small focus of a street-food stand, and Fernandez hasn’t yet scored a huge impact on the East Bay’s food scene. Still, his story over the past year is a foretelling of the future for chefs who want to survive in the neighborhood restaurant biz.

The times, they call for more than knowing regulars by name and comping the occasional slice of pie. The old model of the neighborhood restaurant is dead. Chef-owners of indie bistros without big-daddy investors are finding the line between primary operations and essential side projects increasingly blurry, and Fernandez is one chef-owner who’s particularly blurred.

Fernandez grew up in San Francisco — the Mission — and is without formal culinary training. He cooked at Taverna Santi up north in Geyserville, and was opening sous chef at Gather. Fernandez’s imagination seems too restless to be contained anywhere for long.

Fernandez bought Sam’s Log Cabin a year ago, in large part because it gave him a commercial kitchen from which he could contemplate other projects. (He’s sole proprietor, technically, though Mike Dalik, who does front-of-house, is a working partner.)

Scott and Carol Schumacher opened Sam’s in 1998, in a circa-1939 roadhouse they decorated with an antiques-mall cache of vintage chotchkes. They’re all still here: egg beaters suspended from the ceiling, age-stained photographs of mustached strangers. Sam’s seems as timeless as the perpetual vintage the Schumacher’s were reaching for thirteen years ago.

As for the food, Fernandez is the first to admit that it needs an update, something he predicts he’ll do well before another year goes by, maybe even this winter. Meantime, he’s caretaking the existing eight-year-old repertoire, while slipping in his own food as specials and transforming everything via produce sourced from farmers’ markets.

Breakfast is the menu’s spine. Sam’s Steam Schooner is some kids’-book configuration of griddle cakes topped with eggs — it looks nothing like a schooner, actually, even when you add a side of “oars,” i.e., two slices of Hobb’s bacon. House-made scones are baking powder-biscuit crumbly. The one we tried was studded with sweet-scented strawberries and walnuts. The special griddle cakes one day contained pieces of green-skinned pear (Comice, I think) and toasted almonds — the pear taste didn’t quite come through, but it was a nice idea anyway.

The Schumacher-era fish sticks haven’t changed since Kim Severson reviewed them back in 1999 for the San Francisco Chronicle. They’re odd. Also weirdly compelling, if you like starchy things — ground catfish mixed with tapioca starch and cornmeal, then battered (the shape is exactly like Twinkies) and shallow-fried. You get a huge plate of them, with tangy tartar sauce.

They’re certainly not delicate, those fish sticks, but the green salad — a lovely pile of butter lettuce in a vinaigrette that layered dill’s pungent greenness over poppy seeds’ cocoa-shell earthiness — is. A chicken soup that got its body from ground chickpeas, capped with buttery-tasting rye croutons, was a hint at what Fernandez’s own menu might eventually taste like.

Later that day, shoppers at the Albany Farmers’ Market could score a purer taste of the chef’s imagination from Fernandez’s Boffo Cart, in a pulled-pork sandwich about as unlike the sticky-sweet barbecue-sauce versions that have become this millennium’s Sloppy Joes. Fernandez’s version piled soft, loose shards of meat — browned on a plancha-like griddle over burning mesquite — on a bun from Starter Bakery, a fellow market vendor. It had a squiggle of Dijon mustard, but the most striking flavor came from fresh marjoram, a booming, smoldering taste like a burning smudge stick.

Fernandez was also grilling peaches — again, sourced from somebody at the market — split and filled with scoops of fluffy goat cheese that softened, threatening to melt in the fruit’s heat. They were the right mix of sweet and not, the peaches, with goat-cheese taste that was perfectly muzzled (Fernandez blends Laura Chenel chèvre with cream cheese).

Does Fernandez want to expand Boffo Cart, maybe grow it into a truck? Not exactly. The chef says he’d like to expand Boffo into a bunch of little places that serve pasta, supported by a central milling facility, sort of like Berkeley’s Phoenix Pastificio, that could also supply other restaurants. Oh, and there’s also Fernandez’s League of Urban Eaters, a sort of club for people who might want to attend butchery or preserving demos, or attend special events at Sam’s. Special brunches on Monday holidays, Fernandez says, with proceeds benefiting the homeless.

Fernandez describes the idea behind these different, mutually supportive enterprises running out of the Sam’s kitchen as “crossfit”: hard to describe, but small-scale, neighborhood-based, a home-grown dynamism Fernandez says the word “boffo” somehow captures. “It means sensational,” he says, “it means spectacular; it’s something the business has to be.” Welcome to the era of the boffo chef.

Facebook
Twitter
Linkedin
Previous articleHalf of California Workers Will Retire at or Near the Poverty Line
Next articleHarborside’s Death Tax
18,646FansLike
0FollowersFollow
67,429FollowersFollow