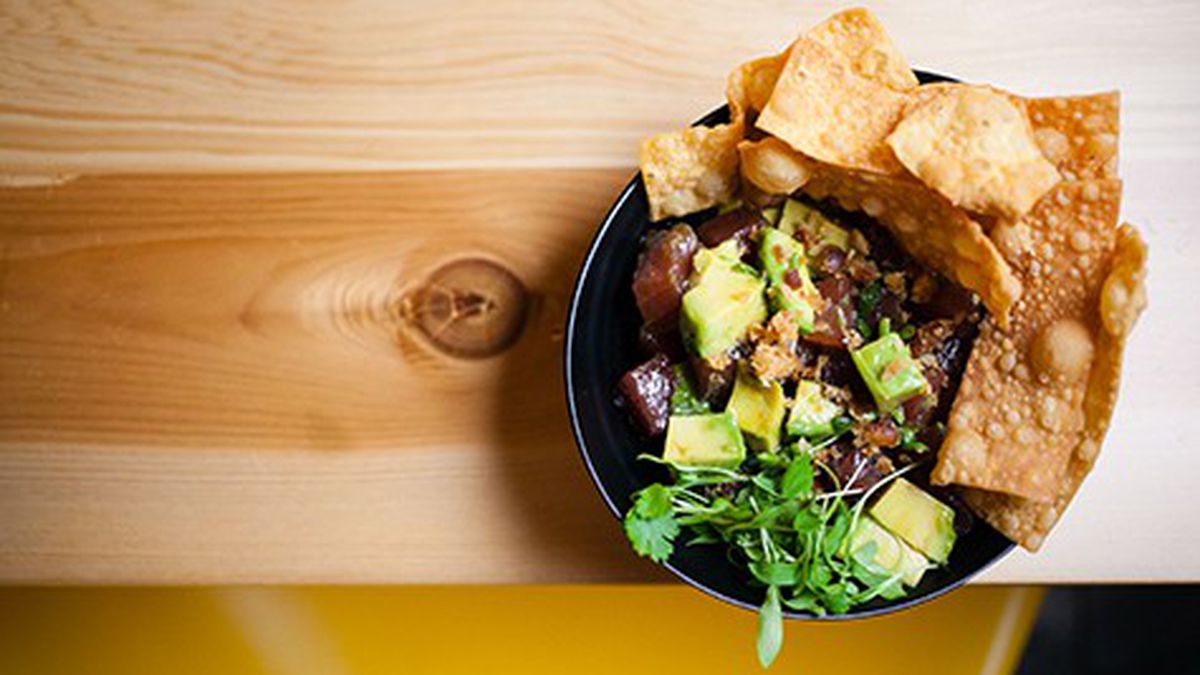 Blind Tiger is located in the basement underneath an all-you-can-eat Korean barbecue restaurant, and its name is an old-fashioned term for a speakeasy. So, you might arrive at this new bar and “Asian tapas” restaurant in Oakland’s Koreatown Northgate district expecting some kind of secret hideaway — the door to enter hidden behind a bookcase, perhaps, or a special handshake you have to complete in order to gain entry.

Instead, if there’s such a thing as an ostentatious speakeasy, Blind Tiger is that. It’s the kind of underground bar that announces itself, loudly, with a giant tiger-themed mural and a Voltron-esque tiger’s head that glowers down from above the doorway with neon-red eyes. The interior also doesn’t exactly aim for subtlety. Once you make your way downstairs, you find yourself in a dim, cavernous space — a former nightclub — that seats two hundred and offers enough sensory stimulation to assure that no customer will ever lack something to look at. The main dining is set up to resemble an outdoor picnic area, with dozens of Chinese-style paper lanterns of every imaginable shape and color overhead. A smaller, more romantic “enclosed” area is decked out with slanted wood beams and Eames dining chairs. (In the course of writing this review, I typed “Bling Tiger” at least three or four times — an oddly appropriate typo.)

If you visit on a busy Friday night, the music will be cranked up too loud, the place will be crammed to the gills with twentysomethings, and some random movie will be projected onto two or three different surfaces, including the entire length of one wall. It can be altogether too much. Or, if you’re in the right kind of mood — and especially if you find yourself in the company of a big, loud group — it can be pretty great.

And while the bar doesn’t necessarily present itself as the kind of place where you would come specifically to have a sit-down dinner, its repertoire of Asian-fusion small plates consistently overshot my expectations.

Blind Tiger is the second restaurant project for co-owner Edward Yoo, a longtime Oakland resident who is one of the partners behind Gogi Time — the aforementioned Korean barbecue spot upstairs. Yoo said he toyed around with several different concepts for the basement space before settling on the current formula, which he described as a “gastropub serving street food with an Asian twist.” It’s part izakaya, part soju bang, and part trendy Californian cocktail bar.

For those who keep a tally of such things: Blind Tiger’s owners are of Asian descent, but both chef Deena Chafetz and — at least during my visits — quite a large proportion of the servers and customers are not. That said, I found the food from the frequently changing menu, which reads as a tour of Asia, to be neither more nor less “authentic” than what you typically find at this genre of restaurant. In a phone interview, Chafetz told me that she is intensely aware of the culinary atrocities committed fifteen or twenty years ago, when “Asian fusion” was the biggest buzzword in the American restaurant scene. Thankfully, you won’t find misguided combinations like wasabi mashed potatoes at Blind Tiger. Instead, about half of the menu consists of solid, fairly straightforward versions of various Asian street-food dishes prepared with some kind of twist, but not so much that it calls attention to itself.

One of the very best dishes was a plate of grilled duck-heart skewers, which were prepared Thai-style, with a marinade of oyster sauce, galangal, cilantro stems, and bird’s eye chilies. These were notable for their extreme tenderness, as well as for the way the flavors worked to complement, rather than disguise, the delicately gamey flavor of the hearts.

And a bowl of hot and sour clams with glass noodles could hardly be described as an Asian-fusion dish: It was a fairly faithful version of a Thai- or Vietnamese-style sour soup — a hearty, homey, cold-weather dish. Its modest spice level left me wishing that it delivered more on the “hot” part of its name, though.

Other dishes were more in keeping with the kind of thing you’d expect to find at a trendy Asian-fusion restaurant. Massaman curry fries featured a slightly sweet coconut-milk-based curry of beef short ribs, with thick, fluffy steak fries standing in for the potatoes you’d normally find in the curry. As far as the Fries With Stuff On It genre of bar food goes, this was a solid-if-not-exceptional interpretation. The ahi tuna poke proved to be one of the most addictive bites, despite the fact that it was served with fried wonton chips that proved to be unwieldy scooping vessels (in addition to being a bad Asian-fusion cliché). Cubes of creamy avocado made a great addition. And it turns out that Chafetz fries up a mean crab cake — lush, crisp-exteriored, and generous in terms of actual crab meat. The only thing Asian about the dish: A tangy yuzu-kosho tartar sauce flecked with black sea salt.

Indeed, some of Blind Tiger’s biggest selling points don’t point to Asia at all: It’s one of a handful of places in town to offer a dollar oyster happy hour. (In fact, there are two two-hour happy hours, so mollusk lovers can feast on cheap oysters for four out of the eight hours the restaurant is open.) And you wouldn’t expect it, but the place also serves one of the better $10 burgers you can buy in Oakland — almost certainly one of the very best that you can routinely get your hands on after midnight. Made from a house-ground mix of beef sirloin, chuck, brisket, and short-rib trim, and topped with American cheese, it’s a better version of the same kind of simple all-American burger I’m always trying to make at home.

Not everything I tried at Blind Tiger was a roaring success. The red-cooked duck potstickers boasted a high price tag ($9) for three pan-seared dumplings, and even though the wrappers had a nice crust and an admirably juicy filling, the duck itself was awfully bland for something made using the traditional Chinese braising technique of “red cooking.” And an Asia-fied take on Mexican street corn suffered three-fold: The cob I was served wasn’t charred well enough or served with a boldly-enough seasoned aioli to compensate for the early-season corn’s lack of natural sweetness.

Meanwhile, the only cocktail I tried was a boozy milkshake called the Mint Choco Monk-Shake, which turned out to be exactly what I thought it would be — which is to say, enjoyably minty, but probably not the wisest pairing for any food known to man. Not to worry: There’s a large and fairly reasonably priced selection of draft beer to choose from.

And I appreciated that the lone dessert option was the delicate, ribbon-like frozen confection known as Taiwanese snow ice, available in a few different flavors — a light, refreshing way to end a meal (or to help you sober up, if need be).

Most of all, I appreciated the friendliness of the service, and the fact that I wasn’t made to feel weird or self-conscious when I showed up alone one night and proceeded to order myself a three-course meal. That counts for something. And I also liked that the prices were mostly quite reasonable, as far as the spectrum of trendy Oakland bar food goes.

“I want this to be for the masses, and not for this ‘New Oakland.’ I don’t want to snub my nose at where I came from,” Yoo said.

That counts for something, too.

Stop and Frisk Is a Bad Idea

He Came, He Saw, He Conquered