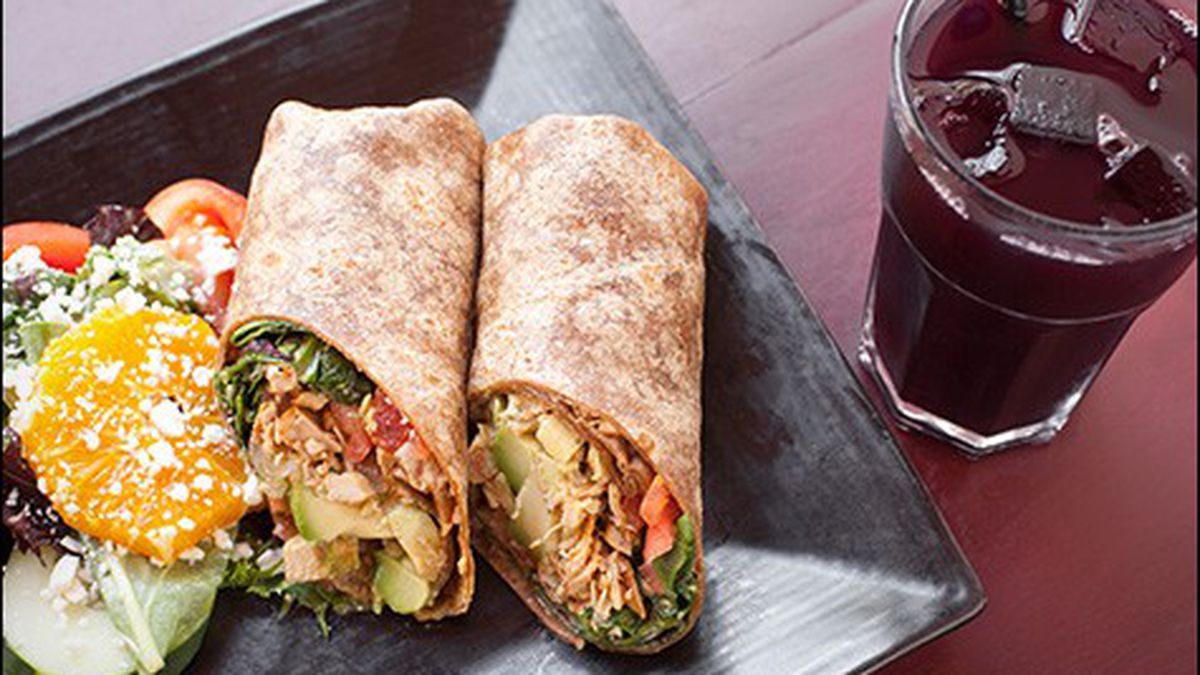 With their 16-year history, Baobab Bissap and Little Baobab — a Senegalese dance club, music venue, bar, and restaurant, spread across two adjacent buildings — are an institution in San Francisco’s Mission district. Then, last spring a kitchen fire knocked the restaurant space out of commission, and owner Marco Senghor spent the better part of the year dealing with insurance agents and running fundraising campaigns. Suddenly, he felt like his future in the Mission wasn’t so secure.

So Senghor did what every savvy businessperson in San Francisco seems to be doing: He expanded to Oakland.

Toward that end, the chief innovation at Bissap Baobab is something Senghor calls an “Afro wrap,” which is basically a West African take on a burrito: a sauce and meat (or tofu) of your choice, tomato, avocado, and salad greens, all stuffed into a whole-wheat tortilla. I opted for the chicken yassa, which featured shredded dark meat tossed in a mustard-based caramelized-onion sauce (a tasty byproduct of French colonialism), with a few slices of potato to soak up the juices. The whole thing was served piping hot, and the avocados added a pleasant element of creaminess. My only complaint: I picked (or spit) out at least a dozen tiny chicken bones.

For a few extra bucks, you can get one of several combo-meal options. Mine came with yucca fries and a glass of one of the restaurant’s excellent house-made juices — I was especially fond of the deep-purple, punch-like hibiscus juice.

Mind you, this still isn’t anything close to fast food. I waited a good twenty minutes before my wrap came out — not significantly faster than when I ordered a full sit-down meal. If you have a short lunch break, calling ahead for takeout would be a safer bet, at least until the kitchen hits its groove.

If you haven’t eaten much Senegalese food, you might find the rest of the menu — dotted as it is with mafes, dibis, and other unfamiliar words — slightly daunting. But the mix-and-match format isn’t so different from what you’d find at, say, your neighborhood Thai restaurant: Pick a sauce, a protein, and either rice or couscous.

Senghor explained that most Senegalese dishes all start with the same foundation: onions, garlic, and tomatoes sautéed until they’re soft and fragrant. To that aromatic base, the cooks add Dijon mustard and lemon juice to make the aforementioned yassa, or tomato paste, and ground peanuts to make mafe — tasty, especially paired with the vegan house-made African-style “tofu,” which turned out to be a kind of meaty-textured bean cake (called akra in Senegal) that Senghor makes with black-eyed peas. The combination made for one of the better vegetarian dishes I’ve had at a West African restaurant. And grilled tilapia provided a nice, mild canvas for another of my favorites, the dibi — a savory onion sauce that was similar to the yassa, minus the mustard.

The most distinctive sauce was the spicy, coconut milk-based curry sauce for the seafood coco, a dish Senghor said had roots in Réunion, a French island located off Africa’s southeastern coast. The sauce was delicious — seasoned with tamarind seeds, habanero chiles, and paprika — and tasted not unlike a Thai curry. But the grilled shrimp that came with the curry were dry and overcooked. Roasted potato slices, listed on the menu but absent from what we were served, would have been great for sopping up that sauce.

My least favorite was the niebe thies, a dish made with black-eyed peas in a “spicy Senegalese sauce” that wasn’t spicy at all and was vaguely, unpleasantly reminiscent of canned baked beans. It didn’t help that the lamb that came with the dish, while Halal-certified and grass-fed, was tough and chewy.

Those who like their West African food spicy should know that, in general, Bissap Baobab dials the heat way back to appeal to the palate of the average American diner. If you’re a chile-head, make sure to ask for a tub of house-made hot sauce, which added a habanero-laced oomph that, to my taste, improved nearly every dish. (Be careful: The stuff is just shy of weapons-grade.)

Aside from the entrées, the restaurant has a short but interesting selection of appetizers. I liked the half-avocado stuffed to overflowing with a well-spiced tuna salad, and served cold — a refreshing bite for a hot day. And the pastelles — fried pastries that were like a cross between an empanada and a beignet, stuffed either with seasoned ground beef or a vegetarian spinach-feta combo — were even better.

Again, food tends to come out of the kitchen slowly, and during every visit there were a handful of items listed on the regular menu that weren’t available. But even with those kinks to iron out, Bissap Baobab is not without its charms. It’s a bright, appealingly funky space, with every wall painted a different, vivid color. A pirogue, or small canoe, that hangs overhead has President Obama’s likeness painted on it and, next to him, Senghor’s grandfather, Leopold Senghor, who was Senegal’s president for twenty years and a famous poet to boot. (It’s a gift from the restaurateur’s home village — the president can pick it up the next time he visits Oakland, Senghor told me.)

The servers were smiley, enthusiastic, and uncommonly kind to the toddler in our party. And every mild disappointment with the food was tempered by a pleasant surprise. Would you believe, for instance, that they serve some of the best crepes in the East Bay (another nod to Senegal’s French influence, I presume)? Go for one of the simpler options — say, the one with lemon juice and sugar, which arrived at the table buttery and crisp-edged, as good an ending to the meal as I could have asked for.