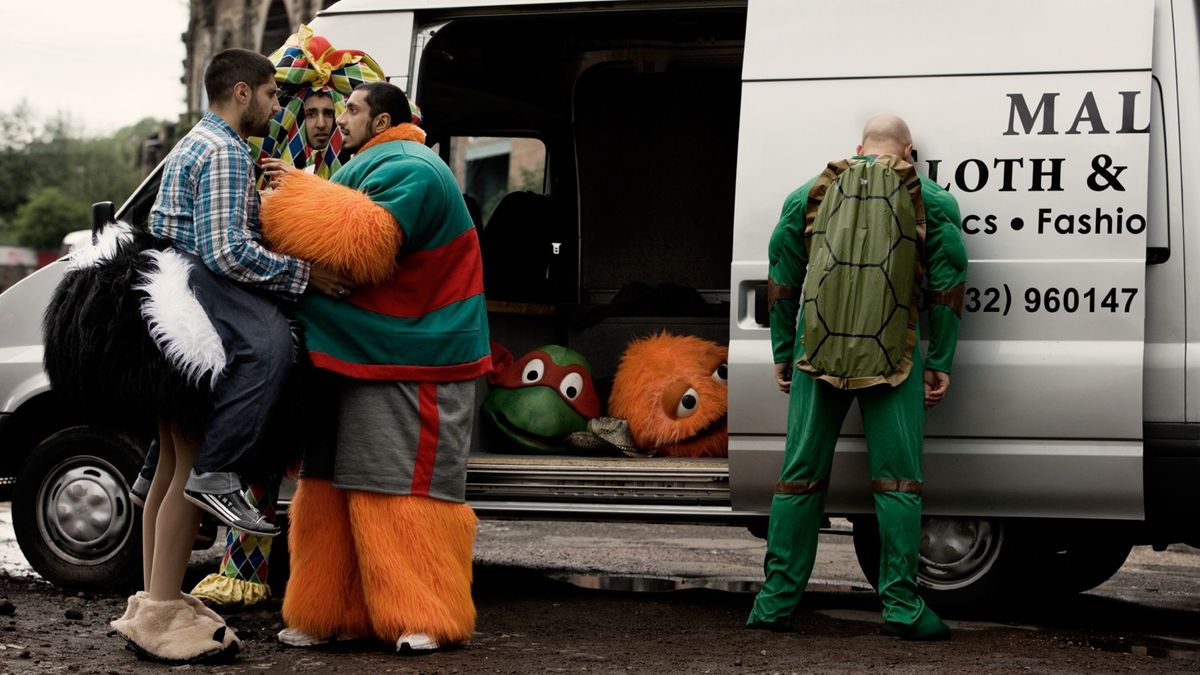 It’s a fantasy scenario for our times: What if radical jihadist terrorists — plotters, suicide bombers, the kind of people everyone in the world is afraid of — were stupid bunglers? What if they were accident-prone nincompoops easily distracted by hip-hop music, video games, and visions of Rambo — who truly believed that Jews control automotive spark plugs and who trust bomb-laden crows to unerringly fly to their targets? What if terrorists, in short, were just like the numbskulls in Chris Morris‘ comedy Four Lions?

That’s a simultaneously hilarious and pathetic premise, one that director and co-writer Morris imbues with the same cheeky British irreverence that he, Steve Coogan, and Armando Iannucci used on their mock-broadcast-news BBC 2 sitcom The Day Today. Morris functions as a sort of radical satirical terrorist in his own right. He has made fun of celebrity-crazy journalism (Brass Eye), exposé TV news shows (Jam), and ordinary guys (Nathan Barley). And now he and a team of three other writers have zeroed in on a different type of goat, the type that wants to kill you. The kind that goes to a training camp in Pakistan. The kind that receives urgent messages from a deity.

The Four Lions live in an unnamed English city. Their activities revolve around the mosque and a nondescript flat where they endlessly shoot and reshoot revolutionary videos (someone always spoils the take). The brightest one in the bunch, so to speak, is probably Omar (played by actor Riz Ahmed), a family man who enjoys reading religious-struggle bedtime stories to his young son and who verbally spars with his utterly commonsensical, liberated wife.

The most radical is the lone white man and non-immigrant in the group, a grimly doctrinaire Islamist named Barry, aka Azzan al-Britanni (Nigel Lindsay). Barry’s idea of a good time is delivering a somber “end of days” lecture to students and concocting absurd schemes like his “bomb the mosque” plot — sure, our own people will die, but it’ll stir up Muslims for the jihad. Good-natured but self-described “thick as fudge” is Waj (Kayvan Novak), possessor of ingratiating docility and literal-mindedness. Aside from his idea to “blow up the Internet,” the essentially gentle, easily led Waj does what Omar tells him to do. Then there’s Fessal the bomb maker (Adeel Akhtar), trainer of the suicide crows. He’s always having trouble making connections.

The guys are nursing a plan to wreak havoc on the upcoming London Marathon by donning ridiculous costumes and entering the race with explosives strapped to their waists. Now if only they could get their cell-phone detonation routines to work properly.

Marching along in a straight line with such comedies as Monty Python’s Life of Brian and Iannucci’s Iraq-war slugfest In the Loop, with a dollop of Mike Judge’s Idiocracy, Morris and his skilled cast visit places other current-events lafferoos fear to tread. After all, how funny are the antics of a cell of klutzy but violent terrorists intent on blowing up innocent people to satisfy a hazy set of incompletely conceived religious principles? Answer: Very.

The scene in which Omar and the boys try to move their bomb ingredients from one hideout to another in broad daylight without killing themselves puts a lethal edge on the screamingly sharp slapstick. Also richly humorous: the cell’s dumb-and-dumber hangers-on and Omar’s “puffin game” group control mechanism. Morris’ plan seems to be to make an irresistible farce at the intersection where Christopher Hitchens’ God Is Not Great meets the Three Stooges. And lest you think the barbs only point in one direction, the cops are just as foolish. Somewhere in paradise, attended by a hundred virgins, is a tent where comic princes dwell. There lives Chris Morris.

While we’re on the twin subjects of stupidity and cupidity, kudos to Alex Gibney’s new documentary, Client 9. Subtitled The Rise and Fall of Eliot Spitzer, it answers two-thirds of the central question: How does a corporate-crime-fighting governor of New York get caught with his pants down in a hooker imbroglio, resign from office in disgrace, and end up with a talk show on CNN?

It’s a fascinating tale. Democrat and former New York Attorney General Spitzer, the one-time “Sheriff of Wall Street” who made his name busting financial-industry wrongdoers, evidently pissed off the wrong guys. Using the same investigative-doc blend of talking-head witnesses and connect-the-dots criminology he perfected in such advocacy pieces as The Trials of Henry Kissinger and No End in Sight, filmmaker Gibney makes a convincing case that ex-governor Spitzer, ostensibly driven from office by a sex scandal, was actually brought down by forces opposed to his vigorous investigation of money barons and power players in the Republican party.

No more Spitzer meant no more Wall Street fraud prosecutions, especially in the wake of the Great Recession’s economic collapse and its attendant high-level chicanery. Gibney names names and even gets a few of the players to talk on camera. Ex-New York Stock Exchange boss Richard Grasso, investment banker Ken Langone, Merrill Lynch, and AIG were all members of the anti-Spitzer society. He cramped their style.

Of course, no one held a gun to Spitzer’s head and forced him to book the services of “Kristen,” a 22-year-old escort from the Emperors’ Club (at a reported $3,000 a pop). But in places like Europe and Latin America, pols and other public figures are routinely linked with prostitutes and mistresses, and governments do not fall. Gibney’s fact-finding strongly suggests that would-be reformer Spitzer’s transition from the NY governor’s office to the relatively harmless set of Parker Spitzer was accomplished by a combination of revenge and damage control by worried financial string-pullers, plus good old-fashioned American Puritanism.

Evidently we’re shocked at a governor having sex with a hooker, but disinclined to peek into the shadowy manipulations of greedy bankers and their enablers — even when those manipulations may be behind the biggest rip-off in the annals of American white-collar crime. Client 9 is yet another chapter in the secret history of capitalist piracy in the US. We grow weary hearing of such things. But just in case we’re curious, this exceptional “outrage doc” fills in the blanks arrestingly. It’s a good yarn that points to the prospect of further good yarns.&#8;