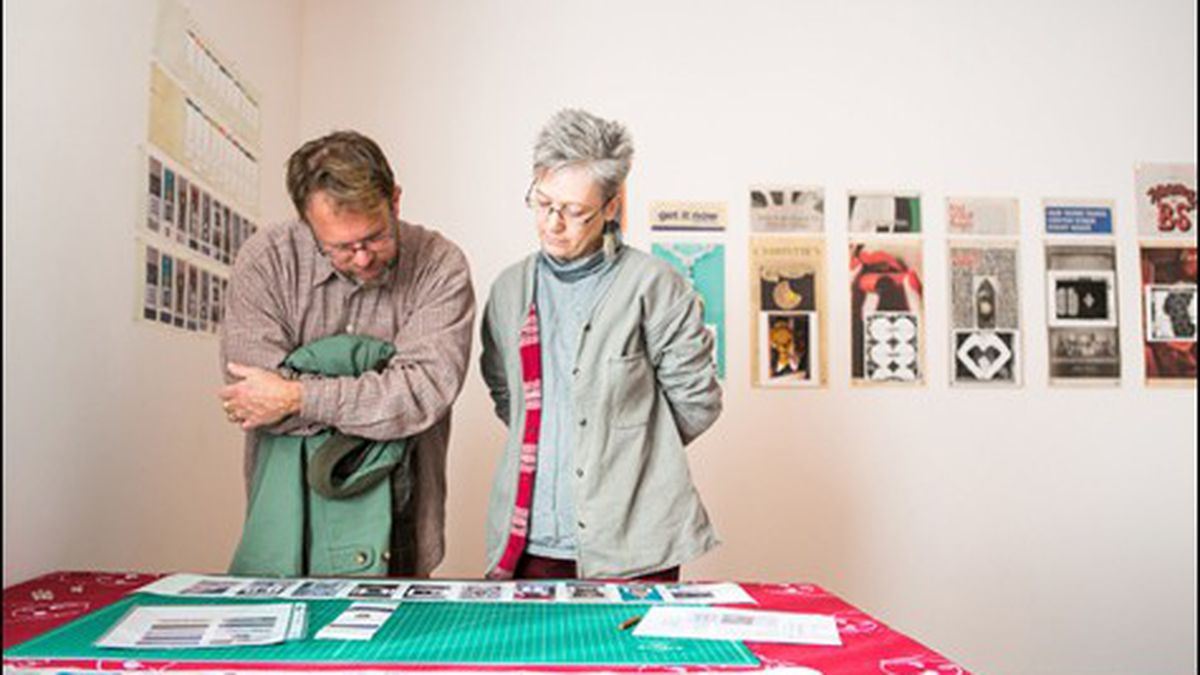 Beyond the White Cube

Some of the East Bay's most intriguing art isn't happening in traditional art galleries or museums.

When one enters Martina }{ Johnston Gallery (1201 Sixth St., Berkeley, 510-558-0993, MartinaJohnston.org), one also enters the home of Indira Morre and Farley Gwazda, for they are the same place. This makes a visitor not only a “viewer,” to use the abstraction typically given to those who enter white cube museums and galleries, but also a guest. Don’t be surprised if the resident co-founders offer you tea and engage you in discussion about the works that occupy their space. You are in the white cube no longer.

Morre and Gwazda, themselves both practicing artists that have come out of UC Berkeley’s MFA program, felt that the East Bay could use another exhibition space for experimental work or perhaps ideas-in-progress — the stuff that many artists long to put out there in the wider world of critical feedback, but which few commercial galleries are keen to show (this is not to suggest anything amateurish about the artists, many of whom regularly exhibit in commercial galleries and museums). So, in 2009 they stripped their living room and back guest room of furniture (save one sofa they insisted on keeping, to some exhibited artists’ chagrin) and opened their doors to their peers.

The artists that Morre and Gwazda exhibit tend to be intellectual and emphatic about their concepts, whether these be meticulously ordered or “exploded.” Anne Walsh used the latter term to describe her An Annotated Hearing Trumpet installation — a scattered-but-exciting storyboard for a film still in the early stages of conceptualization — which was shown at the gallery in October. By comparison, Levente Sulyok’s recent Hakim Bey and Karl Marx-inflected exhibition, All the Paranoid Monoliths, was marvelously tight and cohesive.

The increasing number of such “project spaces,” house-galleries, and otherwise alternative venues is a welcome and exciting trend in the East Bay art scene, whose commercial circuit is itself exceptionally strong (Johansson Projects, Chandra Cerrito Contemporary, SLATE Contemporary, Vessel Gallery, and Swarm Gallery all leap to mind). It is true that these alternative galleries tend to hold fewer open hours, but most are open on weekends and, either way, a little planning ahead will pay off. Besides Martina }{ Johnston Gallery, here are a few to keep an eye on:

Established by young artists in 2009, Important Projects (5432 Boyd Ave., Oakland, ImportantProjects.net) is the upper floor of a Rockridge craftsman house: a lounge space and two whitewashed galleries (one of which used to function as a closet, judging by the size of it). Ceilings are low and insulation could be better, but the art is always strong. The art ranges from formal explorations in paint, sculpture, and collage to relational installations in media that are far from traditional (Cocktails, by the artist group Pplsft, presented vessels containing undisclosed, intoxicating liquids that were available to drink for those who dared to try them).

Royal Nonesuch Gallery (4231 Telegraph Ave., Oakland, RoyalNonesuchGallery.com) has put its shoebox-sized space to varied use since opening in 2010. Besides hosting regular exhibitions, the gallery has this year hosted three open residencies during which artists made the inner workings of their practices available for the public to observe (Amanda Curreri developed what would become an acclaimed exhibition at Romer Young Gallery in San Francisco), as well as a six-artist lecture series. Upcoming in March: a group exhibition of works by Bay Area artists and the Berlin-based feminist collective ff.

Jasmine Moorhead founded Krowswork (480 23rd St., Oakland, 510-229-7035, Krowswork.com) as a sanctuary of sorts for video art, an often misunderstood and criminally overlooked form of practice. While Moorhead continues to keep a keen curatorial eye on the world of video, she has also allowed Krowswork to evolve into a terrifically wide-ranging installation space. Recently memorable have been Mark Baugh-Sasaki’s and Ursula Brookbank’s immersive installations which, while each very different, have both transformed the unique, slightly subterranean space in a somewhat surrealist manner.

As the newest extension of Kala Art Institute, the Berkeley Central Arts Passage (2055 Center St., Berkeley, Kala.org) — a quasi-public, open-air passage between Center and Addison streets in downtown Berkeley — makes for a unique addition to the area’s blooming arts district. The hall itself may be ugly, but if its future exhibitions are anywhere near as strong as its inaugural one, which brought together a group of artists with novel approaches to formal composition, then we have cause to rejoice. With artist Curreri as appointed curator, it’s a good bet.

Having just celebrated its fifteen-year anniversary, Traywick Contemporary (895 Colusa Ave., Berkeley, 510-527-1214, Traywick.com) significantly predates the other house-cum-galleries mentioned above. To be sure, this North Berkeley space is more posh and polished, too, but the spirit is much the same: Paintings, sculptures, and installations sprawl out of the sanctioned center exhibition area and into the surrounding kitchen and dining room, blurring the division between gallery and domestic space and often endowing works with unanticipated effects. The gallery directors gravitate toward artists with strong and unique emphases on material and process.

Debates over the value of art school (like whether post-secondary education actually makes for better artists or rather just homogenizes them) rage on, but for the most part the die is already cast: The majority of the young Bay Area artists worth following, in particular the ones likely to exhibit at the alternative spaces listed above, have come out of institutions like UC Berkeley, Mills College, California College of the Arts (CCA), and the San Francisco Art Institute. The first two of these have phenomenal East Bay-located exhibition spaces that are worth keeping an eye on (CCA mostly exhibits undergraduate work at its Rockridge campus).

If it is possible for a museum to achieve a vanguard position, the Berkeley Art Museum (2626 Bancroft Way, Berkeley, 510-642-0808, BAMPFA.Berkeley.edu) has done so. Its recent shows, Barry McGee and Silence, have eschewed traditional exhibition formats in favor of risky, novel, and often poetic forms of display. Perhaps BAM’s greatest treasure, however, is its Matrix program: An ongoing series of six to eight exhibitions per year, showcasing the internationally recognized artists who are defining contemporary art as we know it. The 245th, 246th, and 247th installments, showing work by Rudolf de Crignis, Anna Halprin, and Apichatpong Weerasethakul, respectively, are currently on display.

The Beaux Arts-meets-Spanish Colonial-style space of the Mills College Art Museum (5000 MacArthur Blvd., Oakland, 510-430-2164, MCAM.Mills.edu) is a sight in and of itself — almost overpoweringly so. Yet, the museum routinely manages to exhibit great art that stands its ground against the parquet floors and high, decorative ceiling. Its recent exhibition of Philadelphia-based artist Karen Kilimnik’s ballet-inspired work was one of the most underrated exhibitions of the year. Currently, two major installations by ex-faculty member Hung Liu occupy the space. Some critics have seen these exhibitions as being physically dwarfed by the space, but in terms of content they are anything but spare.