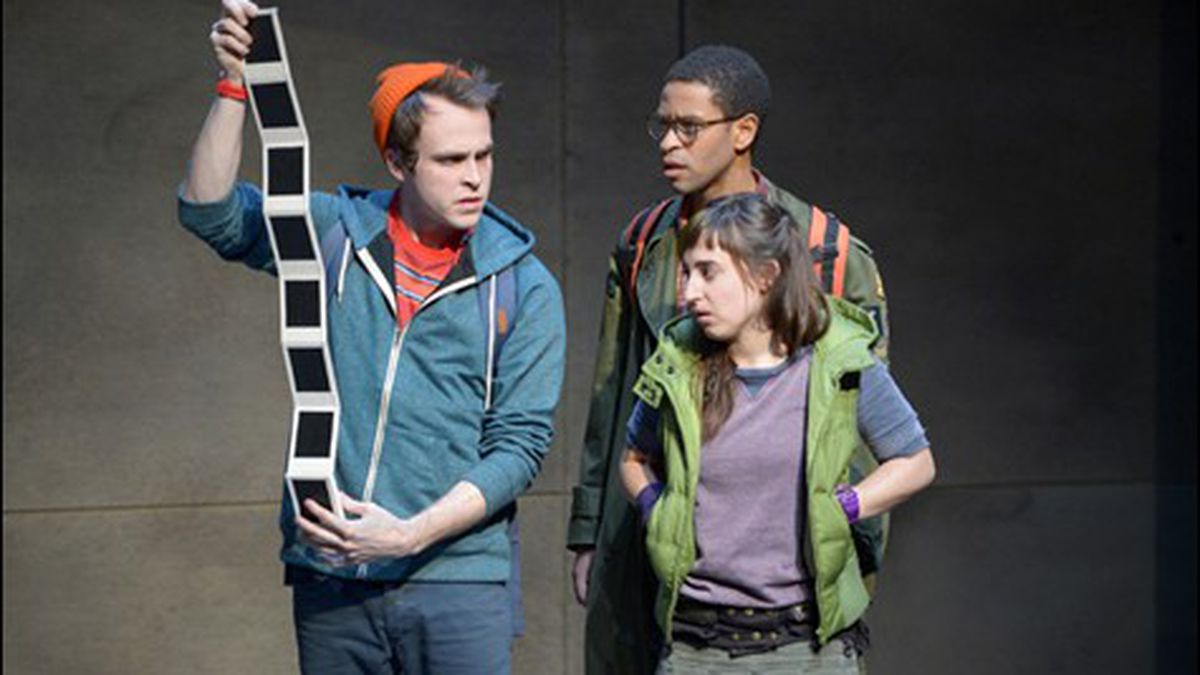 A rebel tween superhero wannabe pummels the bad guys. But not for long.

More novel than a graphic novel, more colorful than a comic book, and able to entertain a middle-aged theater audience for one hundred and fifty minutes, Troublemaker, or The Freakin Kick-A Adventures of Bradley Boatright, is a dynamic, angst-ridden paean to the super-cool kid-power of awesome invention.

Playwright Dan LeFranc’s live-action comic book captures that often overlooked demographic called tweens. Tweens are between and betwixt — teetering between reality-based fantasy and fantasy-based reality. They’re old enough to think they understand it all, and young enough to get it wrong much of the time. They perch where grays seep into an absolute world of black and white, and sometimes they still want to have their shoelaces tied for them.

Bradley Boatright is a twelve-year-old would-be superhero — able to carry a giant chip on his shoulder and escape detection from adults. Gabriel King is terrific as the righteously indignant Bradley. King’s charming performance captures Bradley’s two identities: as a sullen pre-adolescent and an amusing cartoon of sullen pre-adolescence. With his faithful best friend Mikey Minkle (Chad Goodridge) at his side and tag-along grrrl, the spunky Lorette Beretta (Jeanna Phillips) close behind, Bradley is on a mission to outwit and show up his evil arch-nemesis, the stuck-up rich kid Jake Miller (Robbie Tann).

As our heroes strive to thwart Jake Miller, sidestep authority figures, and plot their escape to French Canada, the play is action-packed, verbally clever, and quite zany. The moving friendships, rivalries, and crushes are also sweet and recognizable. Goodridge and King have a lovely chemistry, creating a bond that reveals the intimacies of best friendship with shared secrets, elaborate high-fives, and brotherly disputes. Phillips commands attention as Loretta, a wonderfully quirky tough cookie with a mouth like a licorice whip.

Set in nebulous “nineteen mighty-four,” Bradley and his friends wear the familiar uniforms (Paloma Young’s costumes are stitch-perfect) of youth culture — Bradley in a Where’s Waldo wool cap and zip-up hoodie; Loretta in tights, socks, vest, and a miniskirt; and Mikey in the iconic eccentric brainiac gear of an aviator hat with goggles, army surplus coat, and glasses. Together they look like the gang from Scooby-Doo.

Except they curse like sailors — well, like G-rated wannabe sailors. In building a kids’-only universe that exists largely in fantasy, misinformation, and miscalculation, LeFranc has constructed an original and preposterous lexicon of slang, kid-cussin,’ and dressing-downs. So it’s “freakin’ A-hole” and “Are you freakin’ skiddin me?” And “gum-lickin’ chalk sucker.” Their laughably toothless language reveals children’s attempts to feel powerful in their often powerless lives. And it shows a child’s sharp-shooter verbal skills with improvised weapons: “Call me babe again,” Loretta says, “I’ll rip off your bread stick and shove it up your Olive Garden.”

The original slang is integral to the play. Kids and adults really speak different languages in Troublemaker. Bradley Boatright’s universe is free of grown-ups — much like the Peanuts universe, where adults are only mumbled sounds. Under Lila Neugebauer’s delightful direction, Troublemaker’s perspective is utterly lacking in adult supervision — or adult point of view — that is, until the final act.

LeFranc’s awkward heroes and villains recall the amateur exploits of Austin Powers and Dr. Evil. Tann’s Jake Miller gives a standout performance as a juvenile evil-doer, a John Hughes-style spoiled brat cast as a Lex Luther apprentice. Into the mix is a less-clever plotline in which buffoonish Germans pursue Bradley, threatening to send him off to a treatment center. Danny Scheie is broadly comical as an absurd villain. Jennifer Regan doubles as the stout Nazi-type disciplinarian and as Bradley’s mother. Thomas Jay Ryan doubles as the stuttering principal and Jake’s dad, who may or may not be trying to boyfriend/girlfriend Bradley’s mom.

Confronted by perilous predicaments and diabolical enemies (e.g., zombie pirates, exploding packages), Bradley faces colossal calamity at ever corner. Or, is he just a kid with Oppositional Defiant Disorder? As his mother, Regan is the straight man to Bradley’s over-the-top adversities. She’s the crack in this kids’ eye-view play; she snuffs out Bradley’s hyped-up super adventures with the banal realities of domestic conflict. She drags him, kicking and screaming, out of his insular comic absurdism and into theatrical realism. And so, Troublemaker expands and transforms and is able to aptly leap genres in a single, singular play.