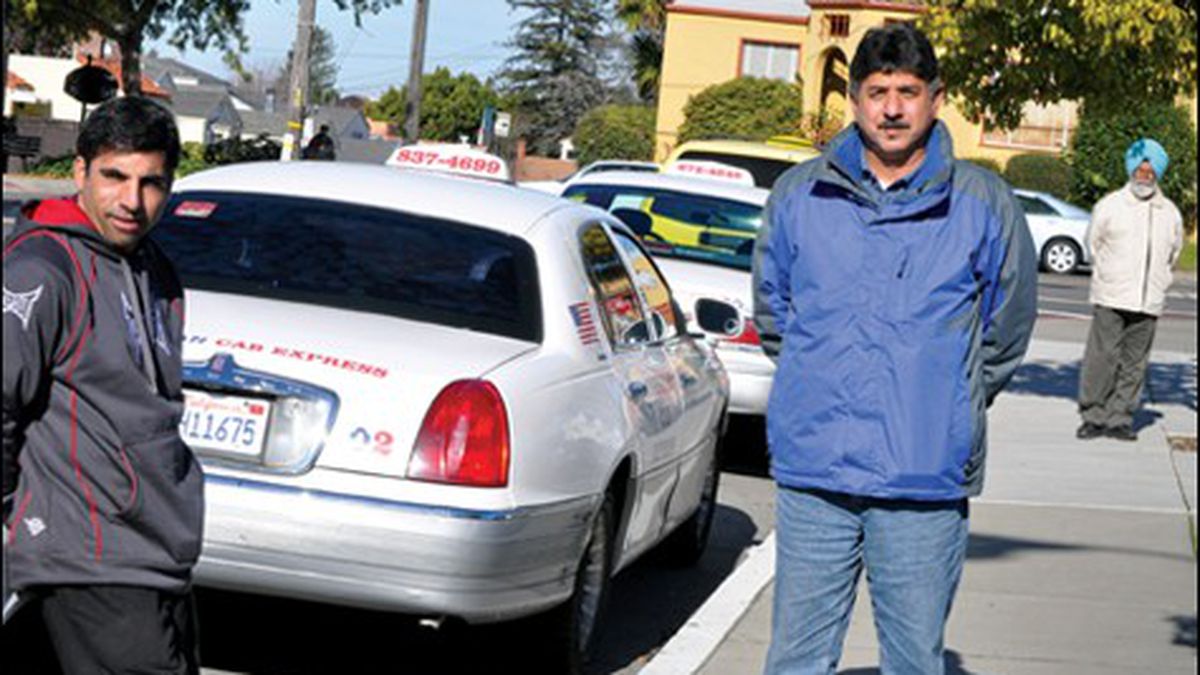 Taxi companies and drivers are banding together to battle what they say are unfair city practices.

Berkeley cabbies are tired of circling the city to snag a spot in one of the taxi stands where they’re allowed to wait for passengers. They’re sick of fee changes without notice. And they’re frustrated with the unwritten rules that often intrude on their work lives.

They also say they’ve had enough of city officials ignoring their concerns and threatening their business licenses. “Every time you go to the city or the police, they treat you like garbage,” said Sajjad Anwar, vice president of the newly-formed Berkeley Taxicab Association. “We’re treated like a bunch of idiots.”

Ninety-two of Berkeley’s 120 taxi drivers — many of them immigrants from South Asia and Africa — have joined the new taxicab association to put muscle behind years of complaints that have gone nowhere. To drive the point home, the cabbies are considering a strike. “We don’t want that,” said Saïd Ali, who chairs the association. “There are thousands of people who rely on us to go to the hospital, to go home, come from home, to go the airport. … But a strike is the way it’s heading now.”

Emeryville fines Berkeley cab drivers who pick up passengers there, but Anwar says Berkeley doesn’t do the same to Emeryville cabbies when they come to town. Berkeley capped the number of taxis at 120, so “people get a permit from Emeryville and then come and work in Berkeley,” Anwar said. In Oakland, police asked drivers to keep cameras in their cars to document out-of-town cabs picking up passengers illegally; they follow up by ticketing the out-of-town drivers, Anwar said. “But there is nothing here in Berkeley to protect our businesses.”

The problem is magnified on days when there are football games or concerts in Berkeley — business that local cab companies count on to make up for otherwise slow days. Cabs from as far away as Fairfield and Sacramento converge on Berkeley. They’ll form a line in front of the legally stationed Berkeley cabs and take the passengers, Anwar said. When cab drivers go to Berkeley police and ask them to enforce the law, the cops say it’s the city’s responsibility, and then when they go to the city, they’re told to take their complaints to the police, Anwar said.

The police and city also turn a blind-eye to corrupt practices at hotels, he said. “The bell boys and front desk people sell the fares for $20 for San Francisco Airport” to out-of-town cab drivers, he said. If the local drivers are willing to pay hotel staff more, they’ll send the business their way, he said.

In an interview, Deputy City Manager Christine Daniel appeared to be unaware of the problem, despite the October letter to her office that described the issue of out-of-town cabs. But she said she would raise it with the police chief.

At the same time, cabbies also face ambiguous rules that govern their business. Take the case of Nicmal Singh, who owns Yellow Cab Express. He was recently socked with several $500 tickets for “unauthorized taxi parking,” under a Berkeley Municipal Code section that states: “No taxicab shall stand or park while awaiting employment at any place other than at a joint use taxicab stand. …”

The problem, according to Singh’s attorney Don Jelinek, a former city councilman, is that the law the drivers were cited for has nothing to do with what they did — leaving their cabs in a neighborhood for an hour or two to do errands. The law addresses waiting for a customer, which they weren’t doing, Jelinek said: “One driver was eating and one was going to the doctor, so technically it’s not a violation,” he said.

Asked to clarify the law, Daniel said: “I can’t respond to a hypothetical. We look at each situation … on a case-by-case basis. If they have their not-in-service flag up because they are gone for lunch — they’re gone for lunch. But if they say they’ve been told to leave their cab there, for it to be picked up by the next driver, that’s a problem.” Most cabs are driven around the clock in shifts by two or three drivers. She said if cab drivers have a problem with the tickets, they can ask for a hearing.

The Express asked Daniel and city spokesperson Mary Kay Clunies-Ross to provide copies of written rules or ordinances that address the question of drivers leaving their cabs for errands or for the driver on the next shift. Neither provided this information. Clunies-Ross responded by email: “It is incumbent upon the owners of any business to understand the laws that govern their business.”

The law is confusing and needs to be “cleaned up,” Jelinek said.

Taxi companies also face contradictory information on fees and enforcement. On October 20, the city sent its annual renewal packet to cab companies to be completed by January 7, under penalty of revocation of their business licenses. The letter clearly stated that the cost for a business license is: “$215 per company.”

Yet when companies tried to pay the fee as they’d done each year, they learned that the cost was not $215 per company, but for each vehicle. Anwar believes the new fee is no coincidence. “Once we founded this association, they came up with some pretty stupid things, like with an additional $215 for each cab,” Anwar said. “It’s like a third-world country. I’m from Pakistan. It reminds me of the tactics officials use there. When they were informed [of the association] they came up with these charges — just hitting you with a hammer.”

It turns out that the $215 charge per cab clearly exists in city statutes, but had never previously been enforced. Similarly, drivers were recently told by a code enforcement officer that they could be charged a $143 fee per taxi for each taxi stand. This fee, previously unknown to the cabbies, can also be found in the statutes, but has never been charged.

The cab association also wants to increase the number of taxi stands, so that drivers don’t have to circle the city endlessly while waiting for riders or a slot at a stand. Daniel gave the newspaper a list of six taxi stands available to cab companies in Berkeley. The Express visited three of them and found the taxi stand listed at the Amtrak station did not exist. There was a well-marked stand at Alta Bates Hospital and a well-marked, though deserted stand in front of Happy Donuts on Gilman Street near San Pablo Avenue.

Cab drivers want input into taxi stand locations. In December, Councilman Kriss Worthington introduced a referral to the city manager, approved unanimously by council, asking the manager to create new taxi stands in key locations, such as at UC Berkeley. Daniel said they’re studying the question, but she pointed out that when a taxi stand is created, the trade-off is that a metered parking space may be eliminated.

Anwar said the association is gearing up to inform the community about the problems cabbies face and about the possible strike. “Before, all the drivers were suffering; everybody was taking the pain,” he said. “Now we’ve put in efforts to found the association; the more pressure we put on [the city], the more they’ll get ready to talk with us.”

Colorado and Washington Have Jamaican Lawmakers Re-Thinking War on Pot